Can a rational creature have a series of small brains instead of a large one?

My question is not human-specific. I found this question that mentions that a brain have more neuronal complexity; I deduce it is more efficient (in terms of neural communication and energy use) to put all the higher complex mental functions in one large organ (tell me if I'm wrong, I'm not a biologist). But in an alien planet, where living carbon-based creatures have plenty of resources and food, could they evolve to have a series of interconnected small brains with the same functions of a large one? These brains could be located across one limb or across the back.

For large animals, octopuses are a possible source of inspiration. They have neurons in their arms, which lets them have a very large brain-to-body ratio. This does let their arms move without as much direct control from the brain.

You could also argue that this sort of structure can be found in leeches. They don't really have 32 brains, one inside each body segment, but they do have one ganglion per body segment, which in a sense exerts local control over that segment. Each ganglion cannot operate independently from the others - that is, it's not like there are 32 individual nervous systems working in unison.

Keep in mind that the segmented structure of the leech is what makes this sort of thing evolutionarily possible. You're probably not going to see this arise in animals like humans, for instance, because there's simply no need. A centralized organ is much simpler than miscellaneous localized ones.

We kinda have that already with a brain split into three sections (left hemisphere, right hemisphere, cerebellum). But there is a lot of connection between those sections which will take up a lot of space, this gets exponentially worse if they are are spread apart. In our brain the connections are roughly a third as big as the parts it separates, so the more your spread it out the bigger the brain ends up being and the more resources it takes to maintain it. As it is our brain eats a third of all our calories, so making it bigger with no benefit is not likely to evolve.

Your biggest problem is the further apart they are the slower information travels between them, so your creatures will end up thinking slower and being less coordinated, worse if far from sense organs it also reacts slower which is pretty detrimental.

The closest you can come is to have a cerebellum like structure for each limb independently instead of one large one. (octopi are believed to function like this) but the thinking portion is still centralized.

There is a being in a somewhat alien environment whose brain(s) have evolved precisely in that manner: the octopus.

They have a quite sizable set of neural tissue, with the largest brain to body mass ratio of all invertebrates. The organization of that neural tissue is also remarkable: about two thirds of the neural tissue are located outside the brain, in the tentacles; each tentacle has its own bundle of neurons, capable of doing some information processing and even sending commands to the muscles.

The central brain can command the tentacles if necessary, but they can also react on their own.

So, if it has already happened in our own planet, it's most certainly possible for it to happen to beings in a different planet. I'm not sure if this layout could eventually reach human levels of intelligence, but I don't see any reason why it couldn't, given the appropriate environment for the species to evolve a brain that large (if any biologist or neuroscientist wants to correct me on this, I'm all ears).

In Vernor Vinge's "A Fire Upon the Deep", there is a planet inhabited by dogs which operate in packs of about 5 apiece as an aggregate personality and intelligence, bound together by sonar communication. (They have ascended as far as medieval technology at the point of the story.) As members ("parts") are separated from the group ("person"), the group becomes less intelligent until eventually each single part has devolved to mere animal intelligence and behavior. When two or more "people" (i.e. packs) come into very close contact with each other they can become confused or otherwise lose their higher-order thinking ability due to the cross-talk of all their sonar. (This makes reproduction - and battle - a bit tricky). Streets are very wide so they can pass each other, and I assume rooms are very large as well if more than one is to perform any task in them at the same time. (They have five "hands" but each is less dexterous than one of ours, of course.) Swapping parts in or out of a "person" is avoided in all but the most extreme cases - such as after deadly skirmishes between enemy clans...

From bees hives, I know they can make decisions as a whole, and it is not exactly known how they do that. For example, if a swarm of bees want to leave the hive with the queen, about half flies away and half stays. How do they decide this?

Bees can communicate in several ways; with odor, touches, and movements. Even the sound of the hive tells the beekeeper something about its mood. Many little brains communicate with each other and make a decision concerning all of them.

Maybe they could form a single creature consisting of many connected individuals, acting like being one, but still able to cleave.

Hmm ... a lot depends on what these extra brains are, well, for. There are some great examples in nature and other answers of distributed brains for locomotion or "taking care of" body parts. Think Stegosaurus! It makes sense ... each little brain controls a segment or a tentacle or somesuch, and the "main brain" just has to send out high-level commands.

Where it gets a little tougher is distributing thinking functions. There seems to be little benefit to scattering this around the body... what are we buying in exchange for the extra time-lag?

This has been done in fiction before.

This is Ki-Adi-Mundi, from the Star Wars universe: 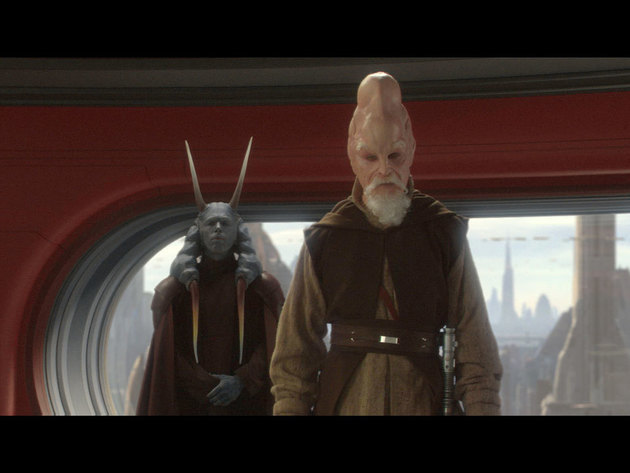 He belongs to a race known as the Cereans. From the Wookiepedia, emphasis mine:

See also the Ood race, from the Doctor Who TV series. These guys have a brain in the head and a secondary brain connected to the face through something like an umbilical cord. 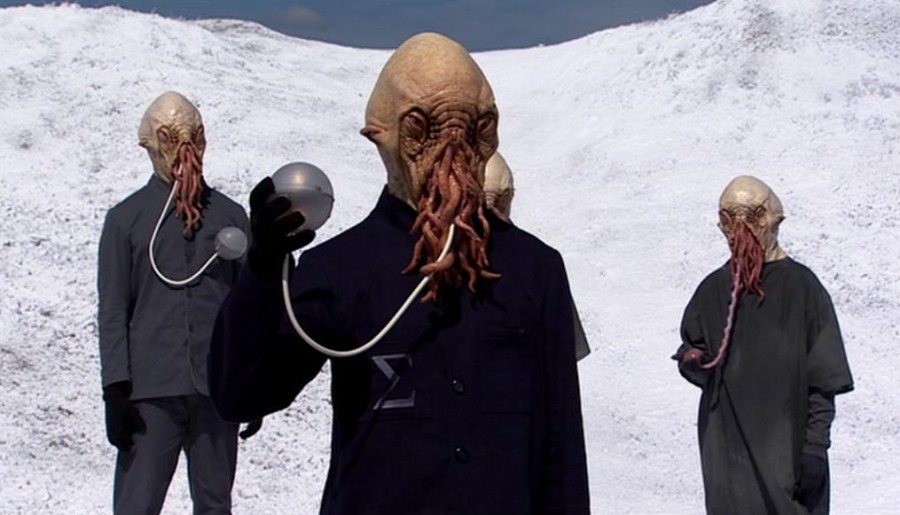 In the past I have answered a question about hormonal sentience. This was about a plant or fungus creature or species that would have no identifiable brain, but rather working its consciousness through the usage of hormones to mediate chemical signals. In such a creature, you could think of each gland (or other kind of hormone-producing organ) as a separate brain or brain part, and they can be spread throughout the body. As with any other answer in this site, you can use my answer there as a basis for such a creature, tayloring it to your story writing needs. The only limit to how such a creature might be formed and how many brains it can have is your imagination.

We already have something similar. The brain is build up of loads of modules that mostly cooperate, but sometimes work against each other.

Read "Why everyone (else) is a hypocrite" by Robert Kurzban. It elaborates why we have this brain structure and how it works in detail. He's an evolutionary psychologist and explains this very well and in detail.

I guess you could also put physical distance between module clusters and everything would still work.

Not the answer you're looking for? Browse other questions tagged reality-check xenobiology brain .

8
How would hormonal sentience work and affect the way a brain works in a plant or fungoid?

6
What problems would an semi-immortal alien race run into?
7
What would it feel to disconnect a part of our brain?
9
With current technology, genetically modified virus able to end mankind
5
Machina Plague: Spread
5
Would it be viable to have a pre-wired brain rather than one that is soft-wired or hard-wired?
6
Best place on an humanoid body to develop biological radio?
7
Anatomically Correct Propellers
1
How can a large creature be deceptively fast?
7
Can a creature have a strong, but flexible neck?