Is a single sex species feasible?

Question: Is it possible for a species to have a single sex? - As in no male or females only one reproductive type.

(As much more neatly put in the comments by Slarty: There is just one sex but two organisms of the same type are required to reproduce.)

I'm going to use mammalian humanoids since that's easier for my brain to work with.

Regardless of whether there's a single sex or multiple sexes, the embryo always has to start from an egg. The egg must have plentiful resources for growing and must contain all the DNA required to mature into an adult organism. Lacking either of these characteristics, the egg won't fair as well as an egg that does have these characteristics.

If the author requires two parents, then it's not possible to choose "males" since male gametes lack the cellular infrastructure to grow into a fully-formed embryo. Thus, we have two egg donors that mate (somehow). Which or both of the parents gets to be pregnant is left as an exercise for the author.

Somehow (handwaving) the two eggs find each other and fuse together. Some mechanism transfers DNA between the eggs and that DNA is recombined with the host egg's DNA. After DNA transfer is complete, the two eggs separate to find their own spot on the placenta. The process of becoming an embryo begins in earnest. As a result of this process, pregnancies are almost always twins. Although, depending on how the rest of the organism is designed, resorption (WARNING: icky pictures) to produce only a single offspring may be possible.

With two egg donors, it's entirely possible to have a species that only has a single sex.

There are some very interesting implications on nurturing juveniles with this system. Females with non-precocious young usually spend a lot of time caring for and protecting their young while males go off and do things (namely, get other females pregnant.) Since both parents are the same sex and are both liable to get pregnant, I suspect a more communal child rearing environment would work better.

I think it would be very difficult, though you could create a world where it could occur.

Now I won't be able to bring up a full scientific argument for why this is so. Sexual reproduction is buried so deeply into the genetics of our ecosystem that it would be folly to try to claim to have "the one reason" why sexual reproduction works better. However, with a little hand waving, we can try to build enough of an argument to build a world which stymies these advantages, leaving readers to ponder whether it is indeed possible.

I think we can generally say that any sufficiently hostile environment to make an interesting story (say, Australia) is going to select for differentiation. It's just too useful. However, perhaps your planet can cause differentiation to happen later.

For expository purposes, let's call the two differentiated sides of your species masculine and feminine. We H. sapiens are familiar with the meaning of those gendered terms, so it's convenient. Now what if your planet had a long chaotic cycle, on the order of 30-50 years. Perhaps its weather, or maybe it's some alignment of some god-awful trinary star system (the stability of which is a separate question). Regardless, it may be very effective to have a large number of non-sexed children, waiting to see what the planet does before adjusting the mixture of masculine and feminine to fit. Maybe 10 years into their life, we find that the planet has created an ecosystem where boisterous strong stubbornness is needed. Then an entire generation can take the path towards the masculine side right then and there.

If your species took this path, it would have to take care not to rely on sexual reproduction. If the phases of the planet demand a vastly masculine approach, there may not be enough females to sustain the population. Likewise, if the population needs to be mostly feminine to get through a subtle crisis, there may not be enough genetic diversity left in the few masculine individuals. This would create a strong incentive for the species to be able to mate regardless of such a gendered arrangement.

If the planet isn't enough of a force to compel your species to evolve for late differentiation, you can always borrow some spiders from Australia. I don't know if a swell of spiders will encourage masculinity or femininity, but if you'll excuse me, I'm going to go jump in my wife's arms now while shrieking like a little girl. 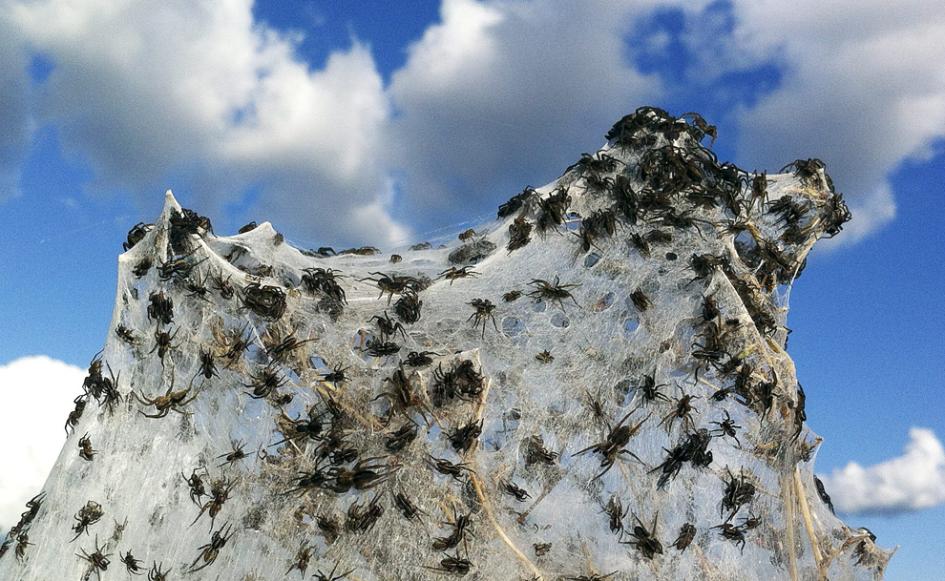 Sexual reproduction between diploid beings (have double chromosomal endowment, have it and mix) is one way our specific evolutionary lineage found to "mix & match" genetic characteristics from one generation to the other.

This fact (mix useful mutation and spread them, not necessarily the way we do it) gives a huge boost to whatever being "invents" it.

It is arguable there are other mechanisms to achieve something similar (in truth we already know this is possible, at least for unicellular beings), but it's clear that, once the method has been discovered, all beings lacking it are at a serious disadvantage.

This for two reasons:

Currently haploid beings are limited to:

From there evolution of "sex" as we know it is a "natural consequence", but may well not be the only possible consequence.

So the answer is: Yes, it's conceivable to have beings exchanging genetic material in a "aequalitarian" basis, but what it could be is really pure speculation and I won't venture in it.

A neonatologist (doctor who cares for newborns) I talked to recently pointed out that a larger percentage of babies need serious medical care after being born. This change came about about a generation after some serious improvement in the way we care for premature and sick babies in the 70s and 80s. He concludes that the genes that make it impossible to give birth without the help of advanced medical infrastructure are already spreading in our society.

If you take this doctor's assertions to the (possibly ridiculous) extreme, you might imagine a race of highly advanced being with no reproductive organs at all who are only capable of reproducing by combining genetic material in a lab. You and your partner both swab your cheeks, pay the fee, and in nine months the lab calls you in to make you parents.

Sequential hermaphroditism is not exactly what you're asking for but may be of interest.

Some fish (and amphibians and invertebrates) spontaneously change sex either as a normal part of their life-cycle or in response to their social environment.

In a fictional world, it could potentially occur in intelligent species.

There are over 65,000 species of Hermaphroditic animals (not including plants), so there is no reason that I see why an organism could have a reproduction technique such that both partners give and receive gametes during mating.

Male and female crocodiles have all the same chromosomes. Their sexual differentiation is determined by the ambient temperature when they develop in the egg.

There are flowering plants which produce flowers with both male and female structures, combining both sexes in one structure. So that means individuals are all the same sex.

So let's combine the two: what if instead of sexual differentiation in the egg, crocodiles just went the way of flowers and each individual just got both types of reproductive organs. They would still need two partners to reproduce but the roles would be interchangeable (or determined by some sort of mating fight, more likely).

I think such a thing would be evolutionarily possible if at the beginning there had been a lot of near-extinctions and communities where the sexual differentiation continued further to form only-male and only-female individuals did not manage to survive them.

They found the group that cross fertilize , would show more mutations , and so better able to adapt in the wild.

Sure. There are plenty of organisms that mate to reproduce but all have the same sex. However, unless you're going for an organism that can reproduce asexually, this creates a problem of self-fertilization. Gametes are generally produced en masse, and you don't want them to be combining with each other before they leave the body, so there needs to be some way to ensure that the gametes don't recombine. There are two main ways to prevent this.

For some species, all gametes look basically the same, unlike organisms with two sexes where the egg cell is bigger and the sperm must seek out the egg. To avoid self-fertilization, such species have what is called "mating types" - an individual can only mate with another who has a different mating type. Now this might seem like a cheat (since mating types are basically sexes with a different name) but many species can have up to hundreds or even thousands of different "sexes", all of them physiologically identical, rendering the distinction moot. Any individual can mate with any other individual provided they don't have the same mating type, and the chance of another individual having the same type is very low. Many fungi use this system.

Imagining isogamy in an intelligent species would be interesting, but as long as there were enough mating types, they might not even know that mating types exist until their science develops to that point. Anyone could mate with anyone else, and one out of a few thousand couples would just be unable to have children and nobody would know why. Or maybe they would have pheromones that would simply cause them to not be attracted to another individual with the same mating type as themselves.

Hermaphrodites are organisms with two kinds of gametes, and each individual has both male and female parts. Technically, it would be possible for such an organism to self-fertilize, but they are usually constructed in a way to make this physically impossible (or at least unlikely). Such organisms usually exchange gametes during mating, causing both to produce children as is the case with snails and earthworms. Flatworms will fight for dominance; whoever gets stuck first must bear the children. Many plants are hermaphrodites as well and avoid self-fertilization by having the male and female parts develop at different times.

there are plenty of Asexual organisms.

I believe the majority of microbes are asexual.

Mitosis is an asexual process and genetic divergence happens with that all the time (cancer).

Even some trees can have an asexual reproduction cycle in the absence of a mate.

Asexual reproduction is when a single organism reproduces without a partner. Once you add a partner there becomes the ambiguous differentiation of sex. These gender distinctions don't boil down to sperm and egg exclusively but more the roles the different parties play in reproduction. So in effect its impossible to have genderless non asexual reproduction. Even in certain fish who trade off being the male or female are still at one point male, female, neutral.

Not the answer you're looking for? Browse other questions tagged evolution sex or ask your own question.

31
Evolution of species with separate sapient and non-sapient forms?
9
Method to share genetics beyond traditional sexual reproduction
5
Methods to ensure gene flow in species with seperate sapient and non-sapient lifecycle
38
Would a sentient species be able to thrive when mating means the death of the male partner?
8
How to justify evolution of a sapient hermaphrodite species
1
What selective pressures would favor hermaphroditism in some individuals of an animal species which reproduces sexually?
7
Why would males exist in species with hermaphrodites?
8
Can a genderless race have sex?
1
Why would a male marsiupial agree to accept responsibility for carrying half of his mate's joeys?
11
Speculative Biology of a Haplodiploid Humanoid Species