If tree sap looked like blood, would we be less inclined to cutting trees down? [closed]

We often feel more concern about the pain inflicted to animal that have expression that are more intuitive to us. We are more compassionate with a chimpanzee than a trout, in part because we are sharing similar expression mechanism (esp. facial expression).

trees are cut down to be used for building or sold as fuel, (sometimes in the form of charcoal or timber), while cleared land is used as pasture for livestock and plantation

According to forest facts

Rainforests once covered 14% of the earth's land surface; now they cover a mere 6%

Imagine a world where tree sap is abundant and blood looking; dark red and similar viscosity as blood. A bit like what we can see on these images 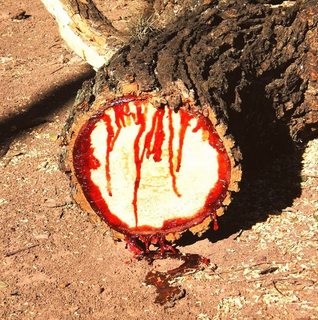 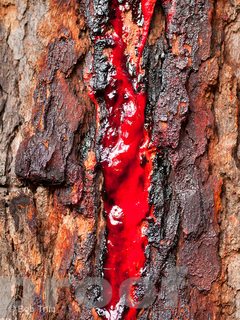 Imagine the origin of the color is unrelated to anything that is of economic or ecological interests.

Would we be less inclined to cutting trees down?

People would generally get over it, like we are already getting over slaughtering animals. Of course there would be some cults which oppose cutting the trees, maybe they will be Ok with using driftwood, but generally that should make no difference.

While compassion for animals, especially ones we keep as pets, is high, it doesn't translate into other animals. We keep and slaughter livestock, they bleed. We hunt wildlife, they bleed.

Human history says that if it pays, we'll harvest it. And we'll do it in the most efficient way possible, even if it's arguably inhuman or self-destructive. Modern livestock is kept crammed in inhuman conditions, yet we happily buy the resulting cheap meat at the store with little thought. Similarly, trees will be felled for the lumber, bleeding or not.

A boneless chicken breast has as much to do with slaughtering a chicken as a smooth wooden plank has to do with cutting down a tree.

In modern society, only the people keeping the livestock or working in the slaughterhouse have to see their conditions or blood or even what is recognizably an animal. Similarly, only the wood workers really ever see a whole tree. The average consumer is removed and only sees a sanitized version. Our current view of meat says we can live with that.

What you might have is people claiming that wood is unethical, or that it must be harvested ethically, similar to leather. Perhaps there will be people who do not want to use wooden utensils or building materials. Whether this will have an impact on larger society is another question. Will it have as large an impact as vegetarianism? Or the smaller impact of veganism?

Sure, some would probably want to stay away from them. But in the end they need wood, how do you get wood? You cut the trees. Most would very likely get over it fast, I mean we still have slaughterhouses, don't we?

However, the ones who cut the tree's could always be looked up at for taking the 'creepy tree job.' There will always be people willing to take the icky jobs, just look at the world today.

Not the answer you're looking for? Browse other questions tagged society psychology forestry or ask your own question.

17
What would life be like if everyone was judged on a point system like SE?
5
What would a society forbidding cryptography look like?
3
What would an Earth-like binary system be like?
3
What would society be like if humans had imagination-based precognition?
3
Would planting trees across an earth-like planet to reduce the CO2 and produce O2, be enough to keep it in balance?
40
Why can't my huge trees be chopped down?