Could modern military equipment work in a medieval(ish) setting?

And a bit longer explanation, I'm thinking of a post apocalyptic scenario with world regressed to something akin to feudal times, twist being that there are people that have managed to salvage quite modern military gear.

The quite obvious problem here is that the maintenance and fuel (to for example tanks and planes) would pose a huge dilemma and make all gear near useless. Are there any ways of making the setting work without making huge leaps in science to something that's close to literal magic? Is there some technology, now or being developed to near future, that would make for example armored vehicles more self-sustained without requiring oil and modern maintenance? Please go really wild and suggest something that might be plausible near-future scifi technology from your point of view that would solve the problem without actually existing in our modern world.

One thing that will be present in a post apocalyptic world that wasn't present in medieval times is knowledge. Once you know something can be built, it becomes just a matter of working out the mechanics. When you don't know if something can be done, or can't even visualize the possibility, as it was in the middle ages, the task becomes far harder, and can take centuries to develop the knowledge base.

During WW2, the Allied air campaign against Germany's oil refineries was very successful, in that their supply of conventional oil based fuel was cut dramatically.

The Germans turned to two other sources: coal gasification, and heated wood. Both processes produced a hydrocarbon vapor that would run a gasoline engine.

Both processes could be reproduced in post apocalyptic times (arguably, Germany in late 1944 was just that). All that is really needed is an enclosed metal boiler and a heat source. An industrious team, if they could find an oil source, possibly tar pits or oil sand, could even construct a crude refinery.

Gas turbine engines are far less fussy about their fuel, and will run on pretty much any flammable liquid, including alcohol, which is fairly easy to make.

Ammunition will be a bit more difficult. Black powder is easy to make, but isn't as powerful as the nitrate based gunpowders, and the messy residue left behind by black powder would quickly foul modern automatic weapons.

Germany faced the same problem in WW1, when their primary source of nitric acid, the basis for all modern explosives and gunpowder, was ammonium nitrate from S America. When the British cut that off with a naval blockade, German chemists came up with a way to make nitric acid from locally available minerals - ironically, a process that was originally developed to produce fertilizer.

For a variety of relatively modern equipment, it would be possible to make fuel with Rennaissance level technology, specifically biodiesel. The chemical reaction to make this product takes alcohol and fat, usually vegetable oil).

Vegetable oil is trivial since it has been made in industrial quantities since prehistoric times. The distillation is trickier. The process was invented probably in the years BC with some sparse evidence from Hellenistic Greeks and India at that time. It was scientifically described by Arabs in the 9th century, used to produce pure compounds in Europe in the 13th, and producing large quantities of spirits in China by the 14th.

The problem is producing alcohol in sufficient quantity and purity to be able to create large amounts of fuel. That was only done in the 19th century. The combination of fractional distillation from Italy and mass production of China could possibly produce a large supply. In any case, it is barely plausible to create a fuel usable by modern tanks and armored vehicles.

A more plausible solution would actually be batteries. If there were a sudden leap in battery technology, such that you could charge up a tank and run it around a battlefield for a day or two on one battery pack, that would change things.

Electric power was not discovered in the Middle Ages, of course, but the engineering required to create large amounts of electricity would have been feasible using hydropower.

Watermills were well developed by the Middle Ages, especially in Europe. Metal mechanical parts were available for clocks by around 1300. Copper could be drawn and coated and then wound to create a dynamo. The combination of these things would make it possible to create an electric generation plant with 14th century technology, if only one had the plans to do it.

If some detailed instructions fell into the hands of a medieval genius, then it is plausible that an electrical dynamo could be created to charge battery powered modern weaponry.

One last note; the batteries themselves could not be of the chemical variety, since they would inevitably be dead after a few idle centuries. However, since these posited super-batteries do not exist, it is plausible to say that their energy density is some function of the physical structure at the molecular or atomic level; therefore, once they are recharged they will work just as well after a few hundred years in the ground.

Obviously, finding ammunition for a war machine will be tough after some thousands of years. However, a directed energy weapon that does not need ammunition would be the way to go in this case.

I would suggest going all-electric, with solar and wind generation to charge batteries. They are even developing all electric airplanes for commercial use. All-electric trucks are manufactured in Europe, and trains are electric. Tanks are not that much more powerful. Military vehicles get about 300 miles per fillup, so I suspect swapping out batteries would provide similar battle performance for an all-electric tank.

I am assuming that, along with the hardware, they have also managed to get maintenance documents to keep them maintained. Grease and oil for lubrication could come from animal fat and vegetable sources. Pressed canola, for instance. Vegetable oil goes way back.

However, there are electric trolley busses that have been in regular use for over a hundred years, and they are still going. Electric requires very little maintenance, and does not suffer from heat degradation. Far less cooling and lubrication needed. You don't even need to change the oil, just keep greasing the bearings.

How much ammunition do you need? Are they having a continual war, or are the weapons more for show, and seldom used? I can imagine they would have significant persuasive effect just by existing, without the necessity to use them. A good ammunition depot should provide plenty. In 2016, the US army bought just 149 Tomahawk missiles, expecting them to last quite a while. Fifteen or so should last a very long time, if used judiciously.

This premise is similar to this question. For how long after an apocalypse would modern cars remain usable?

I propose your salvageurs instead salvage construction equipment.. Specifically, an earthmover designed for the Martian colonies but never shipped. A farm or construction vehicle can factor in the possibility of a resource-poor future - especially one designed for a remote colony which conceivable could be out of touch for years or decades.
The salvaged earthmover (Marvin the Martian) has a sealed chassis so no need for oil. Marvin has an electric motor run by a battery so no need for an air filter or exhaust. The battery is trickle charged from a tiny onboard cold fusion powerplant - exorbitantly expensive but able to provide power for a millennium.

Tires wear out. I envisioned a tire made of wrapped rebar (Mars has plenty of iron). The rebar provides some springiness and most of the wear is incurred by rocks trapped between the coils. Alternatively, the earth salvageurs could make tires from wood, maybe shod with scrap metal. Wood tires seem perilously fragile to us moderns, but they got the pioneers across thousands of miles. In a post-apocalyptic earth, there will be wood.

If some onboard combat ability is really desired build it in. Maybe there are bandits on Mars and so a modicum of onboard weaponry is desired. Another option would be to MacGyver up weaponry with the materials salvaged from the Martian flight. A ballista made of truck springs and wound up by Marvin's power takeoff would work. They could hurl demolition charges.

Marvin has a satellite radio. The satellite broadcaster has a similar cold fusion power cell, and there is one still orbiting Earth like the one on Mars Marvin was supposed to listen to. I envision the end with Marvin, battle won. He is broken, on his side in a hole and can no longer move. The young people build a lodge around him and dance at night to the songs from space. It is like the end of Mike Mulligan and his steam shovel. 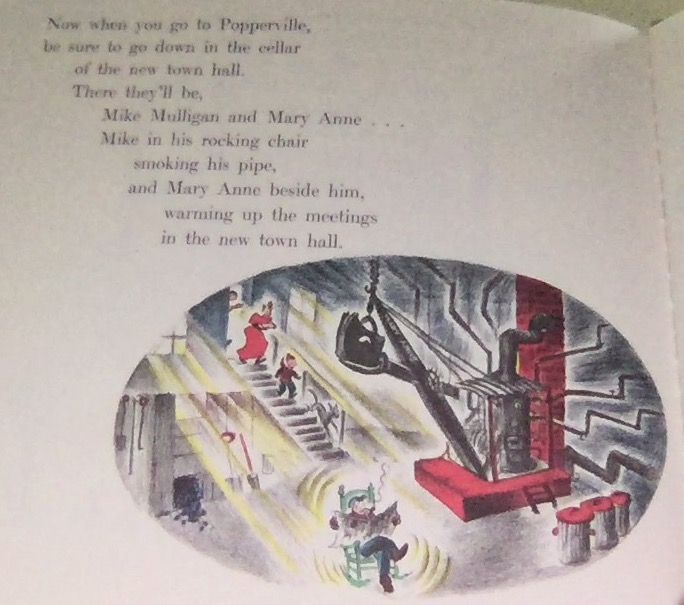 Much of the equipment will still be useful, in one way or another. Perhaps the greatest use will be from deconstructing some of the items to see how they work, then attempting to build new versions. They couldn't make anything like a modern gun, but they could recognize the rifling along gun barrels. They had cannonmakers at that time, so they could work on that technology. It's much faster to work towards a specific goal that you know is possible than to work rather aimlessly and hope to discover something new. So, they'd probably be able to make more accurate weapons and perhaps even something resembling rifled muskets.

The gearing inside tank transmissions would be almost magical, and would transform their world. They could make sketches and traces of the gears and copy them in wood or metal, and apply gears to other machinery that they used - at the time it was probably only windmills. The earliest gears and gear-like systems were horribly inefficient and prone to breakage because they had not worked out the mathematics to make the gear teeth mesh perfectly, so all their gears were pretty rough. The architects and masons of that era were extremely good at copying a pattern and applying it to another place or object (the skills were known since the Greek times), so they would have kept this knowledge as much as possible.

This does all depend on these items ending up in the proper hands at some point.

If you went back in time, the best thing you could possibly do for the people would be to teach them modern metalworking, plastics, and rubber. Perhaps you could do this (with a lot of work on their part) by giving them the periodic table. The industrial revolution couldn't happen until we had good enough metals to build the machines, and it was a very slow process for us to get to that point because it involves a relatively high upfront cost and a non-obvious process.

Not the answer you're looking for? Browse other questions tagged science-fiction medieval post-apocalypse military or ask your own question.

52
For how long after an apocalypse would modern cars remain usable?

10
How to make visually distinct factions in a modern setting
2
Which common military equipment could last 500+ years after an apocalypse?
74
How would primitive peoples detect radiation?
3
Army composition in a “Dies the Fire” scenario
19
How could primitive people destroy or severely damage a very large very modern building?