What is the deadliest acid a hypothetical biological creature could utilize as a weapon?

There are a lot of acids in the world, many of them present in biological creatures. Humans, for instance, have hydrochloric acid in their stomachs. What I'm wondering here is just how nasty it could be if one such creature could use such an acid as a weapon. I suppose this is a two-part question: just how nasty could that acid be, and what would the creature have to be like in order to use it effectively?

I'm envisioning a creature (not necessarily intelligent) that spits acid at its prey, hopefully at a distance of more than a few feet, but feel free to poke holes in that assumption if you come up with something creative. Ideally, it should be able to use acid like what one might see in answers to this question, but that might not be realistic. If it comes down to a choice between two (or more) acids that would be better against different targets (flesh versus metal, for instance), I'd like to see the choices outlined, but you can assume this creature would be using its acid for hunting, not destroying buildings.

You can include suicidal examples for the sake of a thorough answer, but I'm looking for something that can actually survive using its own acids without serious side effects. Surviving its own acids being used against it, like if it was fighting another of its kind, would be interesting but is not required (although it's obviously detrimental if it can't eat any prey it used its acid on, so it should at least be able to survive ingestion in small quantities).

For the purposes of this question, I'm focusing on how the creature could plausibly do this naturally, without magical or technological assistance. An answer with evolutionary reasoning behind the development of such a trait would be a bonus, but genetic engineering is allowed if necessary.

I think perhaps a more practical approach would be a creature that spits or projects two substances which are relatively unreactive apart, but which will combine spontaneously with each other in a violent or corrosive way.

A create doing this might store these liquids (or something in liquid suspension) in two separate areas of the body and the propel both out aimed at the same point. Both will combine on impact and burn or corrode.

This avoids the need for extremely corrosive acids to be stored or moved internally.

I'm afraid my knowledge of biochemistry is too limited to go beyond the concept, but I think it would be worth exploring for your creature.

I've made this a community wiki so that others can easily expand or contribute to this without comments getting out of hand.

Many naturally occurring acids such as formic acid used by ants or citric acid found in citrus fruits would be useful as temporary blinding agents although these are not strong acids concentrated solutions of them can still be dangerous to the eyes.

The problem with strong acids is their ability to damage the creature storing them. Making this difficult, but perhaps not impossible. Some nasty acids that might be worthy candidates:

Hydrofluoric acid: A colourless liquid. The fluoride ion is very small and is readily adsorbed through the skin causing severe burns.

Aqua Regia: a mixture of hydrochloric and nitric acid acids in the proportions of 3:1. It is a fuming orange liquid that is powerful enough to dissolve metals such as Platinum and Gold under the right conditions.

As a very rough rule of thumb the rate of chemical reaction doubles for every 10 degree C rise in temperature, so to be even more effective the acid should be as hot as possible.

One solution to prevent the acid burning the source is to create or activate a substance immediately before use. Such a method is used by the Bombardier beetle (although this is not an acid spray it is very unpleasant). https://en.wikipedia.org/wiki/Bombardier_beetle 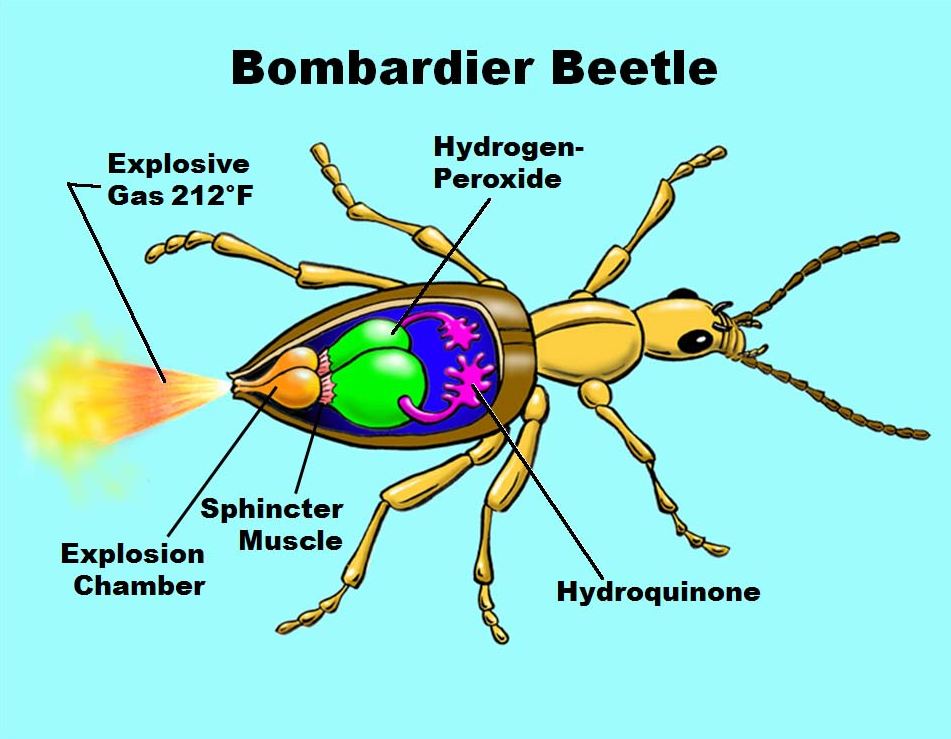 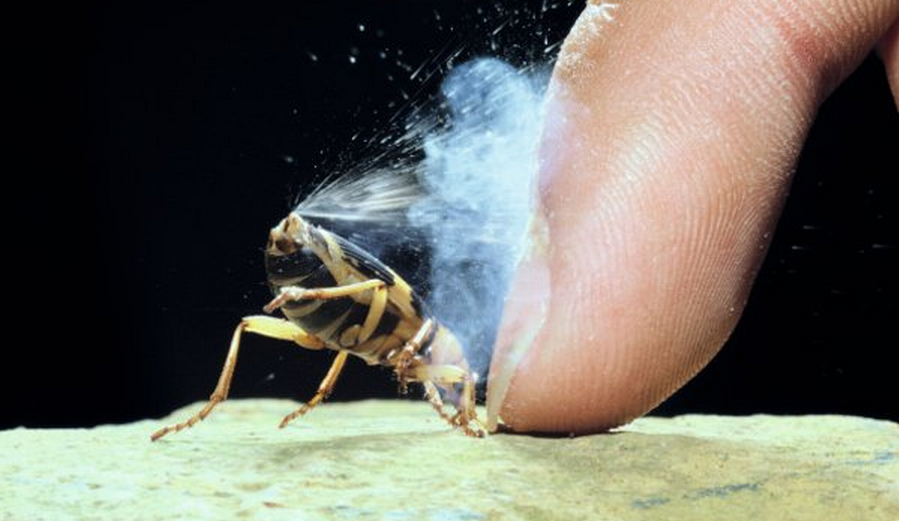 Proposal
If you wanted to make a more devastating acid attack version then perhaps use a large bombardier beetle type weapon but also carrying a third chamber containing oleum. The oleum on its own is nasty enough but if oleum is added to the spray as it is fired it would be very unpleasant indeed.

The bombardier beetle carries supplies of hydrogen peroxide and hydroquinone solution which react together to produce steam. Oleum is effectively dehydrated sulphuric acid (also known as pyrosulfuric acid H2S2O7) so what you would end up with is a spray containing hot concentrated sulphuric acid as the steam reacts with the oleum to produce sulphuric acid. Oleum and sulphuric acid also get hot when mixed with water (or steam) increasing the temperature further. I think pure oleum is a solid but it becomes liquid if a little water is added.

The vinegaroon does spray acid. 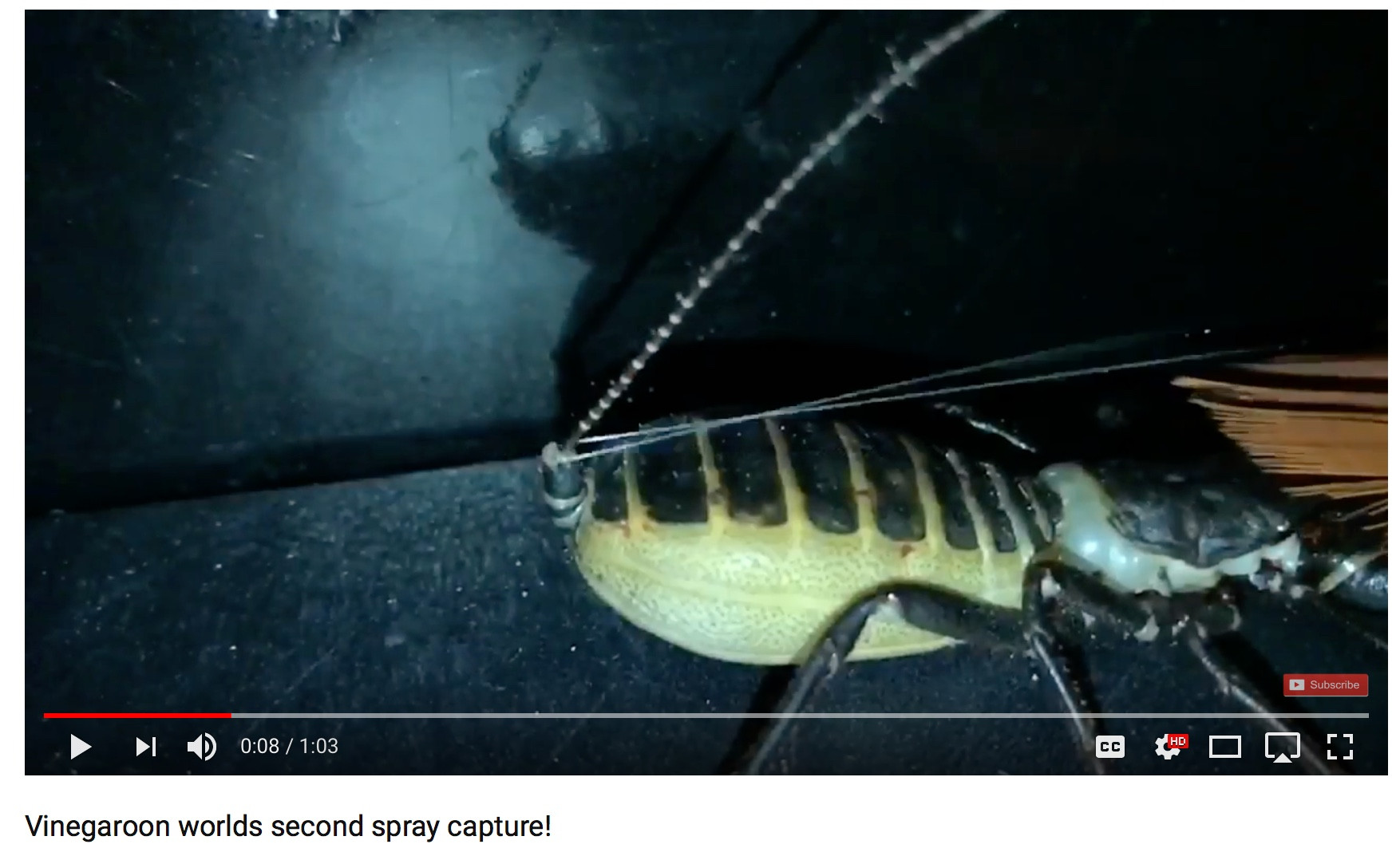 Vinegaroons are arachnids; cousins of spiders and scorpions. The spray is defensive, hunting being done in the manner of solfugids, scorpions and the like (grab thing, hold on, eat it). The spray is a mix, being mostly acetic acid.

As the name implies, this creature has a tail from which she can quite accurately, aim and spray a chemical defense: acetic acid, aka vinegar, which is where it gets it’s more appropriate name, the vinegaroon. So normally, vinegar is a very low percentage of acetic acid. The vinegaroon actually has the highest concentration of acetic acid found in nature: 84%. This chemical is used defensively, primarily other things with exoskeletons. The vinegaroon has a slight problem though. Although acetic acid is quite a wonderful defense on soft fleshy parts, it is water soluble and will roll off of an exoskeleton of it’s attacker without harming it. So it needs to employ another tactic. Mixed with the acetic acid is another acid, caprylic acid, which is able to move through the waxy cuticle of the exoskeleton. This mixture with spread to cover more area as well as actually getting under that exoskeleton so it can do some damage. In the end, when the mixture is actually shot out of two storage compartments in the vinegaroon it is composed of 84% acetic acid, 5% caprylic acid, and 11% water.

Over years of experimentation in which M. giganteus has been challenged by numerous and varied vertebrate and invertebrate potential predators, no examples of successful predatory species that normally encounter adults or fourth instar immatures have emerged. A reason for this paucity of meaningful predation is rooted in the exceptional deterrence of the vinegary allomone discharged by threatened individuals. Rodents, lizards, toads, spiders, centipedes, large carabid beetles, and solifugids flee and rub affected body parts in the soil when struck with the chemical discharge. Even voracious and determined grasshopper mice (Onychomys spp.) are unlikely to be serious predators because when sprayed they flee and plow their mouths through the sand, giving the vinegaroon ample time to escape

So how strong is this? Strong enough to irritate predators and buy time to flee.

Here is the problem with acid as an offensive weapon: it does not have much knockdown power. Acid expends itself fast against body tissue, especially wet tissues. If I am doused with sulfuric acid it will hurt like crazy, but I can turn and run as fast as I could before. I might die of my infected burns after a while, and so a Komodo dragon type strategy might work (they bite then track the prey for days or week, waiting for it to die of infection). But compared to venoms, acids are poor tools for predators.

One cool thing about the vinegaroon is that it has evolved mechanisms to get more out of the acid punch - a second acid that enhances activity against exoskeletons, and a slew of chemicals in smaller proportions that (I think) make the stuff stink worse.

There are actually quite a number of creatures that prefer to digest (or partially digest) their food before eating it. Spiders inject digestive juices into their prey and suck out the organs, leaving the exoskeleton intact. Houseflies have a sponge-like mouth; they eat by spitting up acid onto their food and mopping up the liquefied result. An acid-spitting creature could easily evolve from a creature like this; starting by using its acid in self-defense (perhaps by spraying the eyes of a predator) and gradually moving toward making it their primary hunting tool.

In general, an acid can be made stronger by simply concentrating it. Plain old hydrochloric acid (found in the stomach) is extremely corrosive when concentrated and can cause serious damage to organic materials in seconds - the concentration in our stomachs are pretty low so you don't dissolve your mouth when you throw up, but it could be higher in a species that had use for it.

Not the answer you're looking for? Browse other questions tagged science-based creature-design evolution chemistry poisons or ask your own question.

3
Acid spraying dragon (of death)!
69
Is there a real life substance like movie acid?

61
What are the conditions in which a creature would evolve more than one brain?
10
What is the highest pressure any life form could theoretically survive in?
15
Evolution of a tree-based predator that threatens to kill/eat prey unless prey feeds it?
13
How could an acid-cow make a barrier against acidic milk by synthesizing PTFE, and what would it line?
7
What would it take for a theropod-like creature to be capable of running underwater?
8
What type of acid could burn through skin and any type of metal?
6
How to manufacture/acquire strong acids in a medieval society?
2
Is a sulfuric acid dragon possible?
6
Explaining Alien Monsters: Gargoyles