Is it possible for a medieval society to produce enough food for dragons (with the help of magic)?

The world I'm building is similar to medieval Europe but with magic and dragons. Instead of riding horses knights ride dragons. I wonder if it possible for a medieval country the size of England to provide for five hundred dragon knights with only limited help from magic.

Note that the average dragon should be the size of Drogon from Game of Thrones.

Magic is used to heal any wound or sickness that can kill any cattle and sheep or make them infertile. So cattle and sheep only die of old age and should all continue breeding till death. However, magic is not used to make them breed any faster than normal.

Dragons can hibernate but must awaken for one full day every two weeks both to feed and to exercise so as to maintain muscle mass.

There is a nice helpful calculator for this.

So if your dragons metabolism is comparable to a dinosaur or mammal you are looking at roughly about 1,039,878 kilocalories a day, per dragon.

A medieval cow weighed about 75% of a modern cow and a modern cow weighs on average 1,390lbs (so medieval would be 1,045lbs). So that is roughly 2 cows per day per beast or 730 cows per year per beast.

Now what does this mean for your kingdom

It takes 1.5 to 2 acres to feed a cow/calf pair for 12 months and takes about 2 years to raise a cow to slaughtering age, **so to feed your beasts for 1 year, you need 1460 acres of pasture That is roughly 1 large barony (of half one on the small estimate) just devoted to feeding one animal.

Now England contained roughly 43 million acres of farmland today, so it is indeed possible, but you would be looking at 1.6% of the total farm land, and that is modern farmland, BUT a lot less would have been farmable during medieval times, medieval england only had approximately 8,000,000 acres of farmland (according to the domesday survey) that would mean you are using 9% of your total farmland. This is where the estimate gets a bit sketchy pastureland is not the same as farmland but at the same time the medieval farming systems were only capable of utilizing about half the farm land at any given time. Either way thats a huge amount of food, probably more than they could spare. (estimates are medieval communities could only spare about 2% of their food production for the military.

Conclusion So in the end you might well be be starving your farmers to feed the dragons. At the very least would have very little else including no other military or aristocracy, which means their country would very quickly fall apart because it can't feed it's own government.

EDIT alternatively if you go with Will's idea and say they are herbivores (or omnivores) you are looking at only ~200,000 acres to feed all of them, that much more reasonable, double the acreage and say they get some meat/fish with each meal and you have something with a noticeable impact on the kingdom but not a prohibitive one.

It all depends on how "realistic" you want to make your dragons. Quite frankly, reality takes a back seat when discussing this topic, because flying, fire-breathing beasts that large are not actually feasible.

The amount of food that a large specimen would need to consume to survive, let alone engage in strenuous physical activity such as almost daily training, etc. would be insane, and I seriously question the ability of a medieval nation to keep up with the requirements.

However, since these are magical beasts, there's no reason why they shouldn't be able to subsist on magic itself.

I would probably make it such that dragons love meat, and are consummate carnivores, with the caveat that eating even a whole cow does not provide nearly the amount of energy that dragons require. Which is why traditionally, dragons spend decades hibernating, emerging only to gorge, and then retreating back to their dens.

Dens which they take great pains to stock with magical items they pillage from their hapless victims. They then slowly leach the magical energy from those items over time, thus surviving for decades without having to venture out to hunt.

The very first dragon knights realized that the large piles of gold and gems that dragons are found resting on are not valuable to the beast in and of themselves, but were once a critical source of magical energy! Armed with this knowledge they eventually tamed the first beasts.

The way that modern dragon fleets are maintained, is by having mages enchant dragon pens/harnesses etc. such that the dangerous beasts have a steady source of "food" available, thus remaining awake, and cooperative.

This dragon is huge! A WW2 B29 super fortress only had a 43m wingspan. Of course any flying animal of that scale would be impossible in our world, but since you are using magic I think we can let that pass. If you still want to do some sort of realistic-ish calculation without resorting to magic feeding as well as magic lifting, then you need to know the weight of the beast.

Taking a flying fox as a model – not that accurate but this is a rough calculation to say the least and the data is available.

1m wing span and 1kg in mass and assuming an average density of 1kg/litre of animal.

At 400 Kg per cow (assuming lighter weight cows from years gone by) that’s 4 cows per dragon per day.

Solutions – use magic, have fewer dragons, have smaller dragons, keep the dragons resting for a large part of the time so minimising energy expenditure might cut the requirement by a lot x0.25 perhaps? Breed larger cows like today – maybe 1000Kg could be doable, use extensive ranching on a huge scale.

How did they live before the humans tamed them? If they lived in this world, save for dragons and magic, then they must have necessarily lived far apart, and spent several hours a day eating small meals over a vast territory. Otherwise they would essentially strip the land of animals and have to move on.

But if they lived far apart and had a huge range (so as not to outstrip their food source) then they didn't reproduce very frequently. Which means they can't adapt. But this then raises the question of how the evolved into such large creatures and survived anyway - what's the evolutionary advantage to a creature that reproduces infrequently, takes up a huge amount of space, and eats vastly more food than any other creature? Typically in evolutionary systems you'd find carnivores are physically smaller (though more powerful) than the herbivores they eat.

I'd suppose that instead there were other very large herbivores in the world that had a high enough reproduction rate and a high enough mass gain rate that they could supply the needs of the dragons. But then either they died off or they are still around. If they died off, then the dragons had to change strategy quickly to survive (ie, had to be somewhat intelligent) as a species because there's no food source to replace theirs with. Perhaps they became more territorial, and then started reproducing less frequently (due to territory issues and finding a mate requires leaving one's territory).

Otherwise the huge herbivores must still be around. They must reproduce frequently, grow quickly, and consume tons of grass daily.

So if you don't want to magically feed your dragons, your best bet is to invent their food source as well - huge cows.

The only remaining issue, then, is that there's not enough land in the UK to grow enough grass to feed the herbivore herd sufficiently to maintain 500 dragons.

So make the "huge cows" sea creatures, and make the dragons fishers. This is necessarily limiting, as the dragons then must live near a coast, but the sea can hold and feed huge creatures, and if the dragons can feed like certain birds, searching for signs of whales, diving, and pulling them out of the water to feast on nearby land, I'd say it passes believability muster.

Let us assume this was supposed to be 87,500 lbs or 39 metric tons. That is a medium sized sauropod. It is still nearly 3 times the size of a T.Rex.

The problem is that these dragons are too big for meat eaters.
The solution: they are not meat eaters. 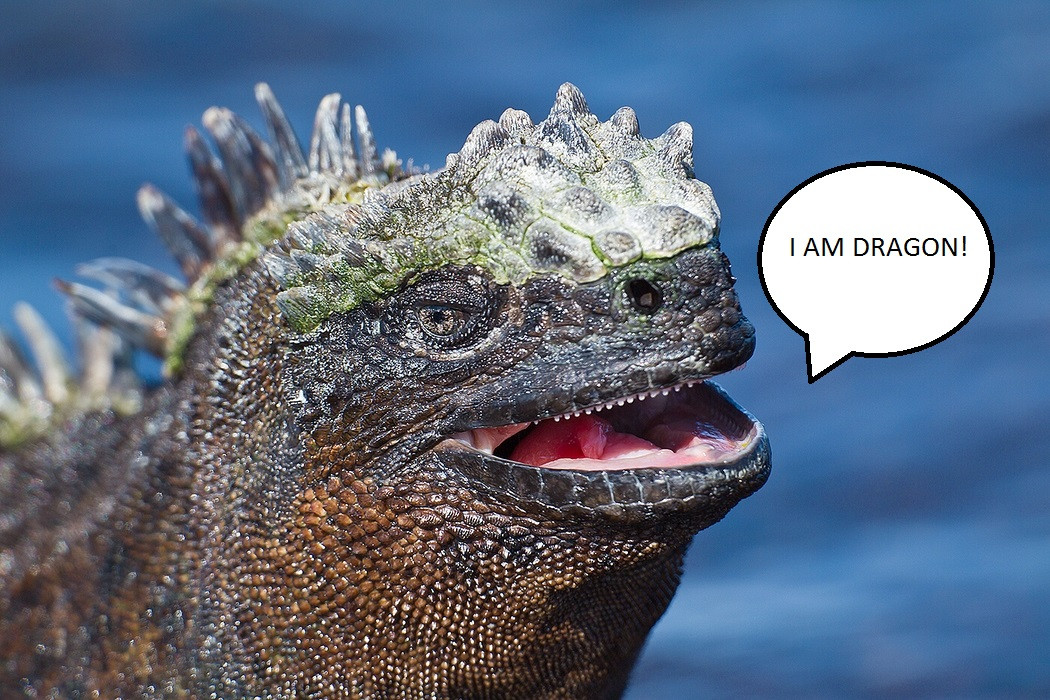 Iguanas are awesomely dragonlike. They have spines and claws and sharp teeth. If you mess with them they will definitely bite you and take off a chunk. And spit it out - they are vegetarians. So too your dragons. They will do all the dragony type stuff you need and then mow their way through swaths of swamp and forests. And kelp beds, like this marine iguana whom I think would be an excellent dragon.

I will point out that vegetarian mounts for knights have some precedent. Feeding grazers and browsers off the fat of the land also has precedent. Vegetarian dragons consuming huge amounts of low quality plant food would produce huge amounts of dung which offers the possibility of a different sort of aerial attack. I will also humbly suggest that dragons endowed with a rumen would produce methane, which offers a plausible method that they might breathe (burp) fire.

My kids and I tell stories to each other where the dragons all just eat metal (hence their habit of eating knights and treasure).

Another option is to have your dragons eat lots of seafood. Lots of meat on a whale...

I think the answer is likely "yes". A Spinosaurus would likely have been 41-50 feet. This is larger than your dragons. And while it is possible that these were fish eaters, there are plenty of other species of primitive carnivores.

Could they survive in England, specifically? I'm less sure about it. From Wikipedia is not clear how many a given region could support (exercise left to the reader). It is significant that a predator of that size requires there to be prey of similar size — it takes a lot of effort to hunt, if a predator has to hunt constantly, that will lead to a net decrease in size. Of course, if these predators are being fed by humans, then they could theoretically get bigger.

If I were creating a world with dragons, I'd also create giant tree-eating herbivores while I was at it. The benefit of the tree-eaters would be that they would not take up valuable land for crops (keep them in the fallow field, near the woods), they would provide plenty of fertilizer, and they would give plenty of meat (for both the dragons and the people) without needing to sacrifice valuable grain-growing land. (The need to surrender croplands for animals actually caused a few problems in the Middle Ages, this would probably provide meat for cheap).

I think your biggest concern would then be how to prevent the apatosauruses from trampling the azaleas, and the dragons from eating your neighbor's dogs.

174
How could dragons be explained without magic?
34
What is the approximate caloric intake of a dragon?
21
What percentage of a population can be part of a medieval military?

14
Tame and Sovereign Dragons: the opinions of the Sovereign Dragons
18
Tactical Advantages to Dragons with Riders
7
If thunderbirds were real, how would it affect shepherds and ranchers?
14
Just how big can I make this dragon?
9
Is my magic system unreliable enough to allow for technological advancement?
49
What circumstance would produce a society filled with parents willing to let the children be exposed to life-threatening Danger?