I recently came across Could pulsars really act as "lighthouses" to help in interstellar travel?, asked a week ago. The author was trying to figure out if pulsars could be useful for interstellar FTL travel, because they could be used to find a craft's position; the answer was, of course, yes. I had some reservations, though. My main issue was that it seems, from an engineering standpoint, not very feasible. Here's my thought process:

Let's say that we overcome various other technical hurdles, and need to attach a 100-meter parabolic radio telescope (although I'm open to other designs, if you can make a very convincing argument otherwise) to an interstellar spacecraft, for the purposes of finding and monitoring pulsars for navigation. I'm concerned as to whether or not the telescope could survive sub-lightspeed travel for any extended period of time. By this I mean acceleration for perhaps two weeks to a speed of maybe $0.01c$, staying at constant speed for three months, then decelerating for two weeks. Propulsion would likely be from chemical rockets.

So far, nobody's actually addressed the original scenario in as much detail as I'd like. I'd love answers that do that; it's why I asked the question. However, I wouldn't be totally opposed to answers that suggest different but related options, such as using a different type of telescope, or using pulsars a different way. But you'd have to make a really good case for doing so, and you'd still have to justify that this option would survive the spaceflight.

My motivation for asking this is that I've considered using pulsars for this purpose in several stories, but I've always gotten hung up on how to solve this sort of problem.

Pulsars are not exactly discrete and quiet things. And radio telescopes do not actually need to look like in the film Contact. In fact... the radio telescope that discovered the first pulsar today looks like this: 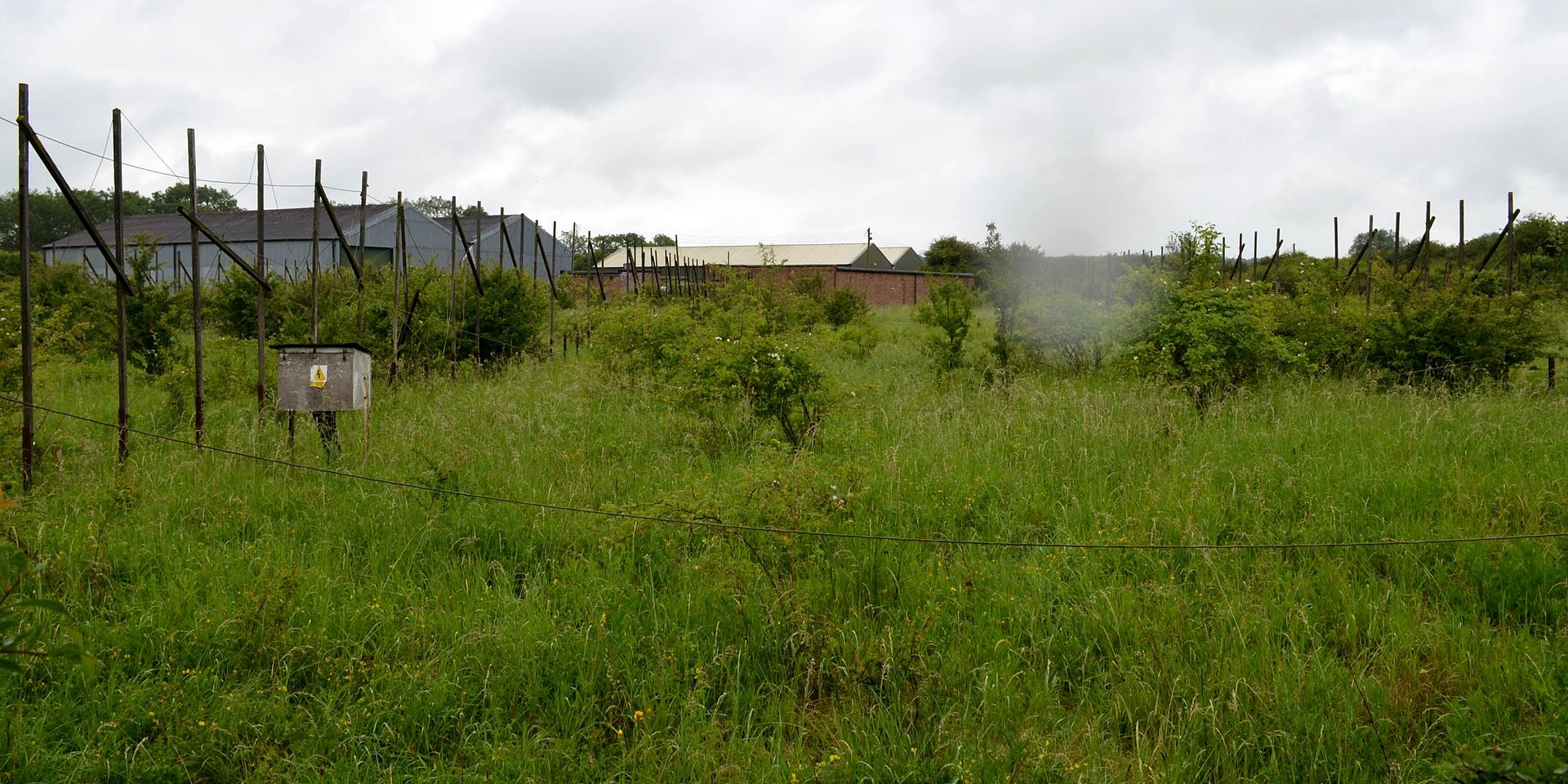 Yes, those uneven poles and sagging wires are what first picked up the signals from the pulsar that affectionately became called LGM-1 (Little Green Men 1).

So you do not need to cover your array with a big metal sheets like you see on parabolic antennas. What your ship needs is not a big dish, but a number of "whiskers". They do not need to be massive, they just need to be long, say up to 100 meters for a nice round number.

Further helping this is the fact that you can "cheat" by having a computer compare the signals from each different whisker. By running some fast and fancy math on the incoming signals, you create a fake antenna that is just as large as if it had been a massive dish that has a hundred meter radius. This is known as a synthetic aperture. And even if the gathered energy of the pulsar signals do not become as plentiful as it would be with a "solid" disk, the extreme angular resolution is such that it becomes easy to pick out the relevant signals from noise.

So can a radio telescope that can listen in on "beacon" pulsars survive a space trip? Oh yes, it can. You just eject the drogue weights that un-spool the "whiskers", and soon you will have the bearings of all the pulsars you need to make an accurate estimate of your position.

You do not want your dish hanging in the breeze as you zoom about. You want it when you want it, and not before or after. You want an Inflatable dish. 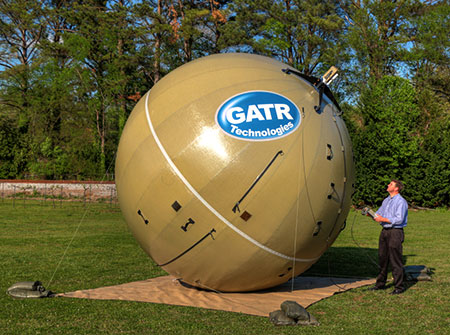 Your sleek, suave spaceship slips thru space. On emerging and desiring a fix on pulsars, the GATR-type inflatable radiotelescopes are deployed. They inflate to very large size, enabling rapid detection of the pulsars in question.

After listening to the pulses (they sound good), you deflate the GATR radiotelescopes, pumping the inflation gas back into cylinders. The deflated GATRS are packed away and your ship corrects course and streaks away.

Ignoring the amount of likely technological advancement between then and now

An instrument as specialized and large as a radio telescope wouldn't be kept open unless it was needed. The thing about space is don't you have to worry as much about structural engineering against gravity. So you can have very thin loosely supported structures that can sprawl out on demand.

Currently in space this is taken advantage of all the time. When a satellite is put into orbit in most cases its solar panels are rolled out. When a probe reaches its destination its antennae is deployed. A radio telescope isn't much different from an antennae dish. This reduces the chance it will get damaged.

Or, you could look for pulsars that emit X-rays, a much brighter signal. X-ray antennas are also smaller and lighter, says physicist Richard Matzner at the University of Texas at Austin. Their drawback is oversensitivity to electrons surrounding the Earth.

But an X-ray–based positioning system could pinpoint an object to within 10 meters, an improvement on the 100-meter or so accuracy of the radio pulsar system.

The physical stress of motion won't be a problem.

Every telescope on earth is built to sustain 9.8 m/s2 acceleration indefinitely.

Since this is much lower than what we engineer telescopes on earth to it should be easy to engineer a telescope to withstand that level of acceleration.

Can a telescope survive micrometeoroid impacts?

Data on micrometeoroid density is pretty sparse, and I wasn't able to find any. However, I think it is reasonable to use particle density as a proxy. We can get various particle density figures from this post on Space.SE, this paper from NASA/Goddard, and a selection of quotes about interstellar space here. The key here is going to be converting units. Lets put everything in terms of kg/m$^3$.

Mass isn't the only thing driving the potential for collisions; velocity is as well. What we should be really measuring is mass flux, the mass of particles we encounter per unit area per second. Now here it will be difficult to know for sure the velocity of particles in the direction of an object as it is hurtling through space, since this is a vector problem. So we will make some assumptions for best case for Hubble, and worst case for our telescope.

So our telescope is seeing within an order of magnitude the particle flux that Hubble has been seeing since 1993. So the operative question is: has Hubble been damaged by micrometeroids? Well, Hubble did have a mirror replacement in 1993, but since then, as far as I can tell, the mirror was not repaired or replaced by any subsequent servicing mission, and Hubble is evidently working fine today. Which means that Hubble has had its fine optical equipment not (significantly) damaged in space for almost 25 years. From this, it seems the particulate threat to a giant space mirror is not significantly higher than it is for Hubble, and we can expect a 25 year life span, at least.

Can the telescope survive the acceleration?

0.01c is 3,000,000 m/s. Divided by two weeks gets you 2.5 m/s$^2$. Since this is less than 1g, it goes without saying that anything that can structurally survive being on planet Earth will also survive this acceleration. There are plenty of structures that at least 100m across. Perhaps the most applicable, some Airbus A380 variants have a wingspan of 90m, so if it is doable with aerospace materials (i.e. aluminum), then it is practicable in space. Without any turbulence in space, I don't see any way that a telescope would need to be stronger than a large aircraft wing.

I can't think of any. In general, I think we should consider the fate our of our outer planet probes. Of Pioneer 10/11, Voyager 1/2, Galileo, Cassini, and New Horizons, exactly none of them hit anything. From what I can tell, the primary difficulties (with Voyager 2, and Galileo, if I'm not mistaken) were radiation related. But those difficulties happened in proximity to giant radiation fields. Good solar system mapping should allow you to send your telescope into deep space without running into any unexpected radiation.

From the evidence I have, I conclude that a large radio telescope could be moved into deep space without significant damage, and could be expected to operate for decades, at least, not even counting various improvements in space technology that could be expected in the near future.

5
Could pulsars really act as "lighthouses" to help in interstellar travel?

36
How to evolve biological radios?
14
What is a good way to estimate the mass of spacecraft?
4
Is it possible to receive an echo from a radio signal in space?
5
Could pulsars really act as "lighthouses" to help in interstellar travel?
33
Does my Fast-as-Light travel method run afoul of causality or relativity?
13
How far from the Sun could we detect an alien spacecraft similar to the Voyagers?
13
Could people survive on earth if a day lasted 100 years?
4
Could you detect extrasolar intelligence using a non radio-telescope or other instrument?