Can they be pulled by traditional beasts of burden? I want to create a wagon that’s fireproof, can survive high temperatures, turn over to protect the occupants like a shell, and be made with materials available to a pre-industrial society in a world without metal (to protect against dragon attacks, obviously). Such a thing would probably be massively heavier than a traditional wagons in our world, but could it still be pulled by real beasts of burden like oxen or a large horse team? Or would stone wagons necessitate fantasy mounts to pull their weight?

I think the key word here is dragon.

Build a wooden wagon and cover it in dragon scales. It would be the only item to protect you from dragons, not only their fire but also due to the look of it (when turned upside down) will simply look like a dragon in a ball and thus as they won't attack their own serve as protection.

It also fits the narrative quite well.

The alternative is sunflowers. Sunflowers doesn't burn that well.

There is a big group of fire retardant plants. A Canopy can be woven from it.

No comment on the safety of the horses, bridles etc.

With a long enough and strong enough rope, and enough animals, certainly you could pull any load. I think the real challenge would be getting a wagon made of stone that will not break.

To simplify things I'm going to assume that modern structural concrete is similar to a best case scenario for something carved out of solid stone, because they have similar properties and it's harder to find data about the structural strength of stone. It is brittle and handles compression forces well, but not other forces.

Concrete's breaking length, the maximum length of a vertical column of the material suspended from the top, is about 1/25th that of oak. Structural engineering has since antiquity used quite a lot of structural features, like arches, to distribute forces in a way that stone in structures primarily endure large compression forces. This might be harder to achieve in a wagon, and at the very least might merit some redesigning. Additionally it's brittleness would be less able to handle the shocks of a moving vehicle without fracturing.

I started with a Conestoga wagon.

Dimensions given are 18 feet long and 4 feet wide. I estimate the walls to be 4 feet high. We will not consider the wheels.

We are going to make the wagon out of pumice. This dude will make it for you out of pieces this big. 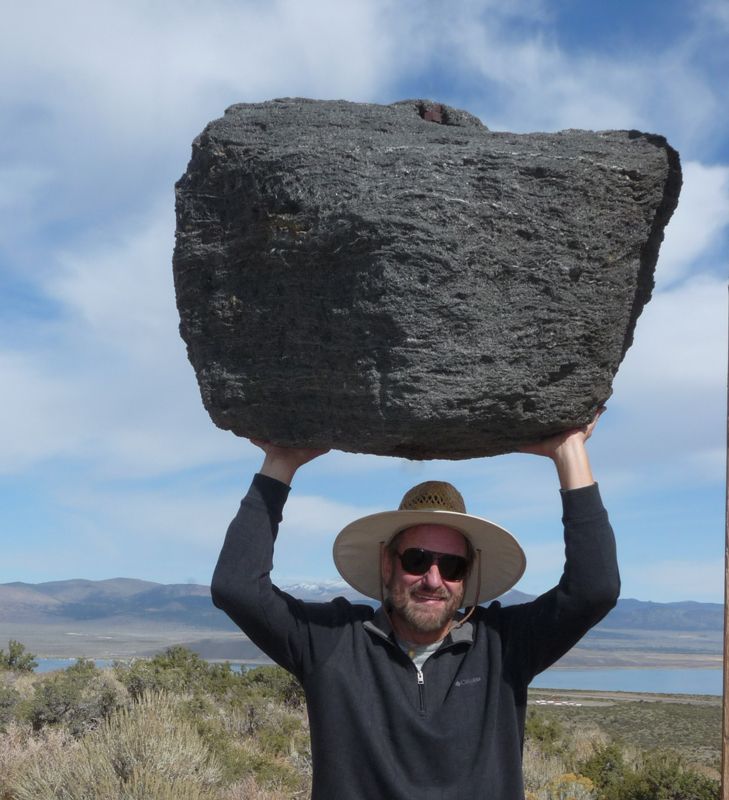 Unless you can find one ginormous piece and hollow it out.

Pumice weighs 40 lbs / cubic foot which looks about right for that guy to be holding over his head. Actually that seems a little heavy - maybe he has some lighter pumice because that must be at least 2 cubic feet.

So: your stone wagon can be pulled just like a Conestoga wagon, by 2 burly oxen. I am not sure how you will pull your wagon when you flip it back over after the fire, because your oxen will be long gone. Unless you train them to lie down next to each other and then flip it over them. That is something you will want to practice a lot when there are no dragons around. Also if the oxen are underneath they will not be able to help you flip it back.

I once read about concrete canoe championships. Those are a real thing. So going from there, with modern tech it would be perfectly possible.
Now to your epoch. Pre-industrial typically means before the steam engine. Or at least before the fairly modern steam engine. That probably takes rebar out of the equation. The romans already made concrete, but we need reinforcements.
Apparently, bamboo can actually serve as reinforcing material for concrete.

So, what do we build?

Your wagon started out as a wicker construct. Yes, a very large basket. That was then covered in roman-style concrete.
While this vehicle is heavy, i am quite confident (thich means: too lazy to do the math) that you could create one that is reasonably fireproof, yet not too heavy to be overturned to serve as a shelter, and be moved by a bunch of oxen. All you do is vary the thickness of the concrete, to arrive at the desired level of fireproofness.

If an oxen, as stated in another answer, can pull something like 400kg on whees, that would mean we need 12 oxen to pull that waggon.

That is a lot. Possible, but really a lot.

so let's look how we can reduce the weight.

Say the wagon doesn't need concrete at the bottom. that reduces the surface area by 10m^2. With the same thickness, that would reduce the weight by half a ton, so we save one oxen. Better, but far from good.

Youn cannot overturn that thing, but since it is alredy fireproof on the top, there's no need to.

So yes, i think this can be considered plausible.

If you have roads of a perpetually wet mudstone that has a slick clay slip layer you could have something toboggan-like pulled along relatively easily but tipping it over is awkward. Any stone vessel stable enough to travel well is going to be too stable to tip over easily in an emergency. Any wagon light enough to tow easily is probably going to be pretty fragile being too thin to endure even small shocks. There are a number of woods that actually resist burning for extended periods of time, I'd have a look at that option first.

As has been said, it isn't can it be pulled, but how many animals will it take? An average ox weighs approximately 1200 pounds and can pull a wheeled load equivalent to it's own weight without over-stressing. A team of two should have little trouble with 2500 pounds and four could pull 5000 pounds from Missouri to Oregon.

What surprises me most is that on a planet that hosts dragons there is not a beast of burden stronger than an ox - perhaps twice or three times stronger. Also, is it not possible that earthenware would be more suitable? Ceramics take the high heat, but also are far more efficient to form - much thinner and lighter. Pre industrial societies have fired ceramics (hmm... fire breathing dragons... ceramics...) for 1000's of years prior to inventing concrete or ways to manipulate "true" stone.

I think you should approach this differently

Stone is impractical for moving parts and especially doesn't handle tension very well. More specifically you cant really have an effective stone axel without a lot of ridiculous engineering because there would either be to much friction or it would simply sheer.

Also stone is very heavy, your cart is likely to sink if it touches terrain other than well built roads of gravel or better (most medieval routes were dirt roads save the ones the Romans built beforehand).

An alternative material that would be infinitely better is CLAY pottery

It's just as fire proof, is easier to craft, is lighter and it was used by pre-metal working civilizations. Problem is, its fragile and generally just as ineffective as stone is with tension. (PS in most carts you will have tension on the axel)

Instead of making the whole cart of stone/clay perhaps make a big clay pot that serves as a roof/dome for the cart. Maybe the wheels could be removed to drop the cart so the dome rests on the ground as a full heat shield. (wont really stop the dragon from smashing it). 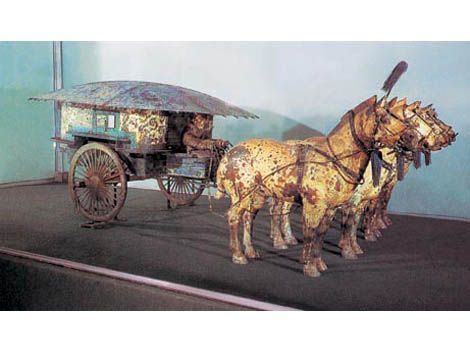 Another potential impracticality. The furnace and resources needed to make such a shield would be massive. Likely, they would make some sort of shingle construct similar to shingles on a roof. So cart roofs could be more easily and quickly made as well as maintained (case of damage). 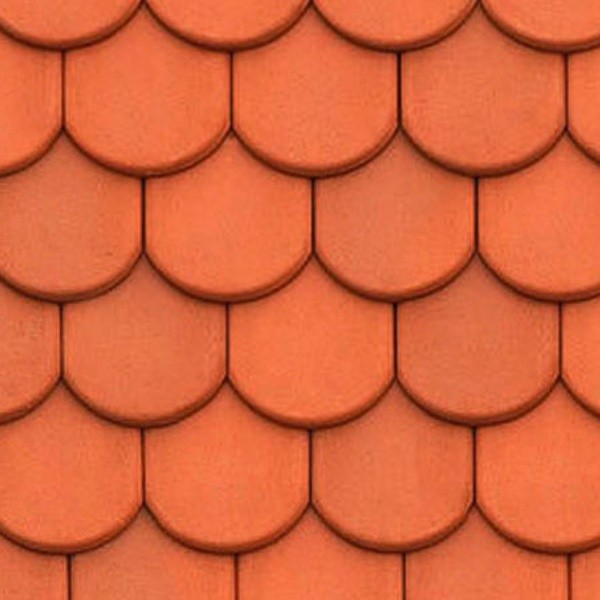 Its not really great, but then a cart defending against a dragon even with metal is a tough stretch.

Think concrete wagons. Concrete is over 2,000 years old. The Romans used it. It would not he difficult to form it into a wagon.

You might find The Secrets of Ancient Roman Concrete a useful link. You might want to think of wooden axles, however. But they would be expendable in a dragon attack.

As for turning it over for protection, it would be better just to build a box, that could stay upright.

Incidentally, in the Wild West, they never actually formed a circle or tipped the wagons over. Another American myth.

Okay, we know that ceramics have been around at least as long as recorded history, are easy to make and are fireproof. Primitive peoples made them by crafting a basket, packing it with clay and sticking it in a hot fire. You now have a pot. Wicker can be made into just about any shape though, so design possibilities are endless. The downside is that pottery is very rigid and brittle. You can mitigate some of that with segmentation.

Segmentation means you might be able to use a flexible connective material and overlapping sections, Kind of like the body of a millipede. Each segment is going to be relatively small with it's own set of wheels.

Each segment has a tile roof over it on some pole supports. In case of a Dragon sighting and possible attack, take some of the roofing bits and lock them into a cover for the oxen. Flip some segments over for a quick shelter and a roof piece on either side for a fireproof hut for your people.

Here is the immediate downside. If the Dragon gets annoyed and spends some time hitting your shelters, they are going to turn into ovens. In that case, your choice becomes being Flame Broiled or Slow Roasted.

How about this tried and true method of a portable protective barrier: 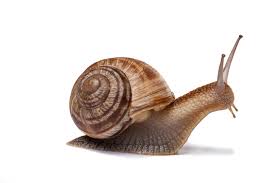 If you look at the design of a snail shell it has two important features for a portable barrier which a wagon-shaped vehicle would not have: 1. the way the snail integrates with the shell is to wrap around the center of the shell. This reduces the tensile stress on the shell as opposed to putting all the weight on an axle. You could do something similar, tie the oxen to the center spiral of the shell. 2. The shell is shaped sort of like a sideways number 6. This makes it easier to lift the shell when the threat is gone because the front part is light and the back part is round.

Only the outer shell needs to be fireproof. Stone wheels would be extremely heavy and would break easily.

You could still have a wooden wagon and wooden wheels with a ceramic or dragonscale covering. You would also cover it with spikes to discourage dragons from knocking it over to access it's tasty occupants.

You also need the shell large enough to pull the wagon team back inside in case of attack.

Not the answer you're looking for? Browse other questions tagged reality-check mythical-creatures mounts or ask your own question.