One of Alice's interstellar jaunts will take her to a Gold Planet. It's a planet that was recently covered in a meter deep layer of gold dust (for realism, it is mixed with silver, platinum, teensy bits or uranium and the like)

I've been thinking about how to do this -- since planets don't naturally tend to refine gold and deposit it as nice uniform layers. My latest idea involves using a Kilonova, or double neutron star collision. This should generate an expanding cloud of gold and other Lanthanides (a few thousand Earth masses), hopefully enough to plate a nearby word.

I am slightly worried however of what having a kilonova going off within gold dusting distance might reasonably be expected to do to a planet(ary system).

Would it make sense to expect a kilonova gold dusting to lay a 1 meter layer of gold dust on a planet, or would the side-effects (have been)/be a bit too dramatic?

How much gold are we talking about?

The typical amount of gold produced in a kilonova via the r-process is . . . not well-known. We've got a limited dataset. That said, if we assume (conservatively!) that $M\approx100M_{\oplus}$, then we need $R\approx2\times10^{9}\text{ m}$, or roughly $0.01\text{ AU}$. The planet would almost certainly be in orbit around the binary system, which could be dangerously close. I certainly wouldn't want to be anywhere nearby!

Things you could do to solve the problem

You do have some options here:

Both of these let you place the planet further from the melee.

It's worth noting, by the way, that only the half of the planet facing the binary system would be significantly coated, unless an accretion disk of sorts was the form around it. Additionally, the depth of the coating would be non-uniform.

What would be the effects on the planet from the merger?

Radiation from such a merger should be emitted isotropically, i.e. most of should spread out equally in all directions.2 It's possible that some emissions could be constrained to thin beams, but this certainly won't be the case for all of the electromagnetic emission.

Let's look at the energies and luminosities involved:

By comparison, the luminosity of the sun is $\sim10^{26}\text{ W}$. This sort of event is brief but very violent. I don't know what the long-term effects of this radiation will be for the planet, but short-term, it won't be pleasant. The deposition of radioactive isotopes might also be a problem, but I don't know just how bad it would be.

1 Okay, it's a bit more than that because gravity's involved, so there's going to be some accretion. In particular, gravitational focusing will give an effective cross-section (p. 22) (see also here) of $$A_{eff}=A\left[1+\frac{v_{esc}^2}{v_0^2}\right]$$ where $v_{esc}$ is the scape velocity at the surface of the planet and $v_0$ is the initial relative velocity of the gas and the planet. Let's assume that the planet's escape velocity is the same as that of Earth, $\sim11\text{ km/s}$. The speed of the ejected gas is expected to be $0.1-0.2c$. This means that $v_0\gg v_{esc}$, and so $A_{eff}\approx A$.
2 For what it's worth, there will be delays before the radiation is emitted, even without the effects of interstellar dispersion. It probably won't help you that much, though - the planet will still be orbiting the remnant.

Planets don't refine gold and deposit in in nice layers. Microbes do.

Have the dust be the dried bed of an ancient ocean, the floor of which was covered with polymetallic nodules. 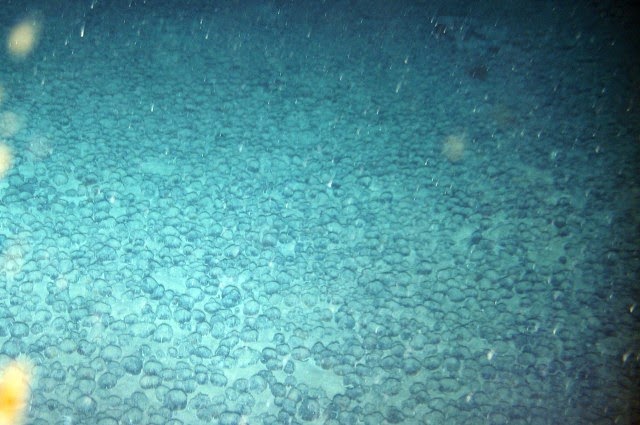 Microbial metabolism can convert dissolved metal salts into metallic nuggets. This is best described for manganese but can happen with other metals, sometimes all in the same nugget.

Deep sea minerals in polymetallic nodules, crusts and hydrothermal vents are not only formed by mineralization but also by biologically driven processes involving microorganisms (biomineralization). Within the nodules, free-living and biofilm-forming bacteria provide the matrix for manganese deposition, and in cobalt-rich crusts, coccolithophores represent the dominant organisms that act as bio-seeds for an initial manganese deposition.

Could this sort of thing form nodules of solid gold? Absolutely, and I think it probably happens. There have been discovered organisms that metabolize gold salts and excrete tiny gold nuggets - probably just another type of the microbial metal metabolism described above. That only has to go on for a few million years before you have a lot of gold nuggets.

Take a solution of gold chloride, a compound toxic to most forms of life. Add a colony of Cupriavidus metallidurans, one of the few bacteria able to survive amid compounds of heavy metals in mines across the world. As the bacteria accumulate the gold salt from the solution, biochemical processes within the organisms reduce it to the pure metal, which the bacteria excrete in the form of tiny gold nuggets — nanoparticles of pure gold. The bacteria produce the gold as protection from the toxic gold complexes that would otherwise destroy their cells.

So at the bottom of your ocean, dissolved metal inputs leached over eons are accumulated into nuggets. When the oceans went away, wind gradually weathered these nodules of gold, uranium and other metals down to dust. Thus it is when Alice arrives.

Not sure how you would work out the stellar mechanics, but if there was a black hole/neutron star eclipsing the kilonova and exactly halfway between the planet and the explosion, then the matter cloud could be gravitationally lensed around and back to the planet. This would also increase the amount of matter intercepted significantly. If the eclipting body also has a strong magnetic field, you would in effect have a stellar scale mass spectrometer, with which you could filter out the undesired lighter ions. Assuming they exit the nova at the same velocity, and I have no idea whether or not that would be the case.

Not the answer you're looking for? Browse other questions tagged reality-check planets space or ask your own question.

10
Can life exist on planets like Mercury?
8
Life in planets with little Solar exposure
9
Must all planets have a solid/liquid core?
11
Could a star explode and reform with new planets?
3
Animal That Eats Planets
0
Pop goes the planets!
3
Grass on planets with very huge forests
1
Likelihood of Torus planets forming
3
Conjoined Planets?