What could make a species evolve downward facing ears? 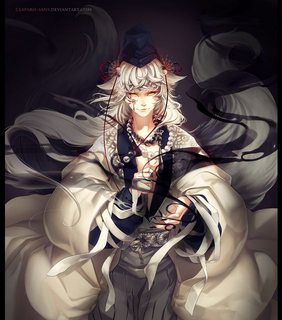 I want to make a species with downward facing ears. They cannot be moved facing upward or horizontal, but can be slightly moved upward (I hope you get it).

What I have in mind initially is that they evolved from a fox (furry ears), but this doesn't explain why the ears evolved to face downward (rather than horizontally).

There's magic in this world, but I would like to explain this using science, or very little magic. You may use magic, but the process on how the ears started to evolve downward should be as natural as possible.

I expect answers to explain the advantages of having this kind of ear (or disadvantages of not having downward facing ears). This species does not have to evolve from a fox, or have furry ears. I'm only interested in how this type of ear evolved.

Downward facing ears can be a problem. Thinking about Beagles long floppy ears can mean that there is not enough air circulation and the ears can get infected. If something makes an animal more prone to dying, but the individual still manages to survive then it must be pretty good in other aspects.

The females like males with downward facing ears because it's not as advantageous as normal ears and over time this becomes the norm.

Predators and prey underneath them

Imagine you have to fear a horde of giant worms who are out to devour you. It's better to have your ears pick up more sounds from the ground so you hear them coming before they are in range to get you.

The same goes with prey. If there are small animals hiding underground and they are very yummy, but hard to find and never above ground for some reason it would be good to pick up sounds of your favourite treat as you go around. This makes survival far easier.

Getting back to the Beagle their long ears and lips help in trapping scent. So if you want to go hunting long downward facing ears might help you with picking up the scent of your prey.

But the whisker's primary use is to help a cat judge whether or not he'll fit through an opening. A cat's whiskers are roughly as wide as his body -- sort of a natural ruler. The whisker tips are sensitive to pressure. You'll probably see a cat stick his head in and out of an opening before he puts his body in. He's judging the width of the opening, and is determining if he can fit into it

Cats use whiskers to size an opening. I can imagine downward / lateral ears being pressed into service in the same role, especially for an animal where the whiskers have regressed to short or nonexistent, or who for evolutionary reasons never had any whiskers. Your species (or their recent ancestors) could use the width of their downward ears to gauge an opening in the dark. If ears fit through barely touching, hips and shoulders will too.

A lot of underground activity

Really all you need is an advantage to being able to hear something beneath you and you're good to go.

The ears are not only downward facing, but highly sensitive. The animal is also a good digger, and there are a lot of burrowing animals (e.g. large worms, etc.) which our animal eats.

Furthermore, most of the water is in either underground streams or in deep narrow gulleys often hidden by flora.

The down-facing ears makes our creature a great hunter, which as well as allowing him/herself and their family to survive, often has the secondary effect of becoming a sexual attraction.

BTW this would probably only work if our creature is relatively high in the food chain - i.e. not particularly vulnerable to aerial threats or large animals which would make "normal" ears more advantageous.

The species may have been predominantly nocturnal or crepuscular in the past and the ears developed to augment vision in low light conditions enhancing not only hearing but also, through the specialization of hairs within the ears, detection of small air currents, especially those carrying particular scents.

This specialization of the ear, however, has made the species very vulnerable to various ailments affecting the inside of the external ear (like otitis externe http://www.hiddenhearing.co.uk/hearing-problems/outer-ear-infections/) which is extra-sensitive to foreign bodies entering (including rain), normal wind movements and even direct sunlight, so having the ear directed downwards, generally shielding them from other directions, is of great benefit.

The benefit and desirability of downward ears, in consequence, drives sexual selection.

Several times a year, for weeks at a time, it rains... well... goop. The goop can be anything... muddy sandstorms, acidic pollen, overactive sap from the forest canopy, anything icky that you don't want to get in your ears.

There are lots of ways creatures protect themselves, downward-facing ears are a cheap adaptation.

6
How to escape a horde of worms using magic with minimal injury?

8
Evolution of a predatory antlered cat?
7
What factors would allow this caninoid species to evolve successfully?
23
Under what conditions would humanoids evolve eyes in the backs of their heads?
6
Is this a viable/realistic imaginary species?
18
Would there be any major disadvantages for a species to have six legs instead of four?
0
How could humans evolve to reproduce in groups of seven?
3
Flatworm's features kept in convergent evolution with vertebrates?
16
How reflective can a creature's body parts get?