Using a quarry as a water reservoir

Our country, which is located in thousands of km2 of plains, needs a way to store water. Dams are not an option due to the fact that there are no mountains. We have retired mining quarries that are unused.

We eventually plan to mine another quarry and build a concrete retainer for the water (to prevent seeping & reduce contamination). And filter and transfer water to the new reservoir.

What are the implications of using a quarry as a water storage?

At quarries and mines they have broken up and crushed the bedrock to reach mineral deposits. This creates lots of free and mobile substances that will be washed along with the water and pool in the quarry. This is a huge problem for you. You risk poisoning yourself.

The second problem is that this will be stagnant water. This is such a potent problem that when my home town realized that the water consumption in the county was decreasing, the water services had to ask the citizens to use more (cold) water in order to keep the water from turning stagnant in the water systems.

How to mitigate this?

The water pH in water that accumulates in some former quarries can be affected by the chemicals used in the mining process and reactions with the exposed rock faces in the quarry.

For example Middlepeak quarry, a former limestone quarry in Derbyshire in England, has a pH level of 11.3; due to its attractive blue colour people would be lured in attempting to swim in it, but they would die. This has lead to attempts to dye the water to make it less appealing to swim in. http://www.bbc.co.uk/news/uk-england-derbyshire-33267461

Other quarries like sand and gravel pits or clay pits are often suitable for use as reservoirs.

You need to know not only what was mined in the quarry originally but also, and possibly more importantly, what it was mined from, the "country rock" as it's called in geochemistry. If you were for example mining Titanium then it's likely that the country rock is granite and there is likely to be Radium in the rocks, the water will be mildly radioactive and have dissolved radioactive Radon gas. If on the other hand you were mining metamorphic volcanic hard rock for road aggregate like they do in Northland then quarry contamination could include Sulfur, Iron and Asbestos. Lets not talk about opencast Lead or Cinnabar mines, you'd have to be extra stupid to use one of those for drinking water. Other potential rock source contaminates include Copper, Manganese, Lime, Salt, Silica, Antimony, Arsenic, and dissolved Halogens, plus rock dust and other potentially harmful particulate.

That's contamination from existing material, then you have to consider where the water is coming from. Groundwater will likely share the same contaminants as the existing rocks but may also bring in added contaminants from the same list but other areas. Surface runoff from the local area may be contaminated by fertilisers, organic material and microorganisms. Direct rainfall is likely to start off reasonably contaminant free in open country but could include acids, other industrial air pollutants in the form of Halogens, organic toxins or particulate like soot or Zinc dust from powder coating.

Then you have to think about what happens to the water that is in storage, if turn over is low, AKA you are using the ex-quarry for emergency rather than routine supply, then Stagnation is the biggest issue, stagnant water is a breeding ground for any number of micro- and macro-organisms that you don't want; many of these concentrate toxic compounds especially sulfurous contaminants. Evaporation will also concentrate any contaminants left in the water that isn't being used regularly. The other issue is that quarries are usually much deeper than they are wide which leads to generally poor circulation at depth meaning an Anoxic layer generally builds up at depth this leads to a build up of highly toxic Hydrogen Sulfide, which can lead to lethal out-gassing either on site or further down the treatment chain.

So those are the problems, the solutions go a bit like this:

As a note you can still dam a river on a relatively flat plain, you built a large earthwork similar in construction to an Earthen Levee that raises the banks of a river and creates both a working head of water and an impoundment space behind the dam for water to pool. This is extremely labour intensive compared to a dam in hard rock at a convenient fall in the mountains but has the advantage of being put where you need it most. 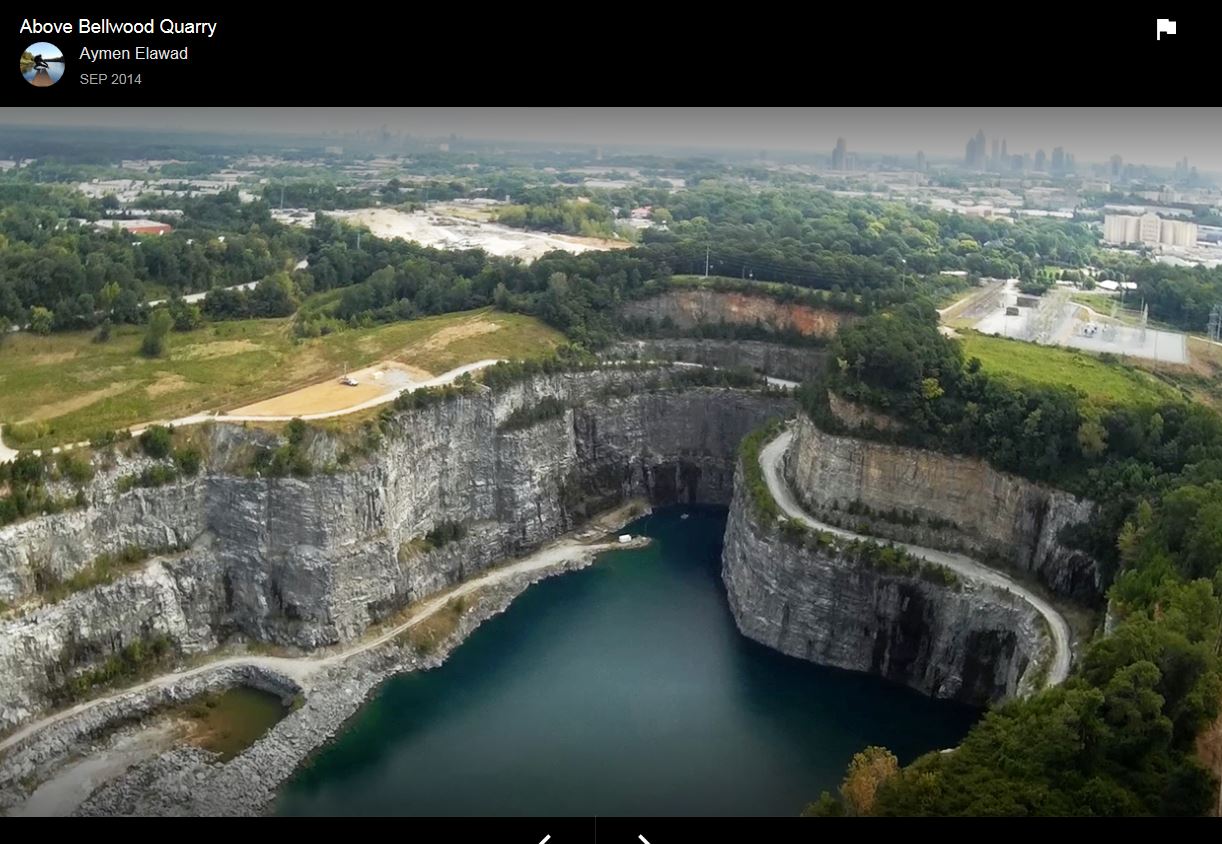 Near where I grew up, the best swimming anywhere around was in an abandoned quartzite quarry. I wish I could find an image linked; it was beautiful with clear deep water. All other water around was muddy and green. Google maps shows it is being worked again. The same reasons that led this water to be so clear are the reasons certain quarries are well suited for use as reservoirs.

If you are going to put water into the quarry (as with the Bellwood project) you can control the purity of what you put in. Atlanta, it turns out, is going to fill it with river water...

All were sand open pit mines. Due to water supply coming through limestone water is hard but very pure. Additional sand bed of all of them filter any contamination.

The main problem you would face is how to supply those mines with water. It may be not efficient to pump water directly to them and store for later repumping.

I don't know if there are no rivers at all in this world, but there may definitely be agricultural runoff. Or there could be periods of time where the quarry fills with water because of seasonal rains.

Either of these cases could cause an increase in salinity of the water in your quarry unless you make sure outside water can't get in like that. Not to mention that there could be high mineral content from the abandoned mining project.

Edit: if this is just a store, this excessive saline and minerals could be filtered out, sorry I missed that part of the question.

As others have said it depends very much on what you have been quarrying. Many materials would make for very bad water storage solution (lead mine), but many others would be fine. The ancient Maya were well known for making use of limestone quarries as water reservoirs and digging specific structures to hold water. This was necessary because in the dry season water often ran low especially in the northern area of Yucatan. But water storage was an issue as far south as Tikal.

It may be necessary to seal the base of the reservoir to prevent or at least reduce leakage. The reservoir bottom and sides might need to be shaped in some places to ensure that water can conveniently be drawn from a vertical edge somewhere rather than a 45 degree incline. Silt should also be provided a place to settle out to prevent it being draw up with the water.

Other key measures that need to be taken: organic materials should be prevented from being washed into the reservoir by clearing the surrounding area of vegetation. Light should be kept out by using narrow and deep quarries or even (as was the case with the Maya bottle shaped underground cavities.

The non-existence of mountains doesn't mean there are no rivers. Some form of river will form anytime precipitation exceeds evaporation.

That said: 1/3 of Alberta is 'land locked' There is no route for a rain drop to run to the sea on the surface. 30 miles from my house is Pigeon Lake, which hasn't flowed over it's outlet weir in 15 years. The lake is about 10 x 20 km, and is having a real problem with blue green algae due to increasing phosphorus levels.

Yet Pigeon lake has several creeks that run into it.

On the Canadian Shield, the last ice age destroyed the existing drainage. It's fairly flat, with mostly rolling hills and rocky ridges. Imagine turning a slab of concrete over very rough from where it moulded into the gravel below. Tip one edge so it has a slope. Run a sprinkler. The cavities fill up, and spill into the next slighly lower cavity. But you can have 'lakes' that empty via multiple channels. You do end up with rivers.

You can think of a quarry as being a very wide well. If you can drink the ground water, you should be able to drink the quarry water.

It's exposed to sunlight, and bird crap, so you will get algae growing in it. But it shouldn't be significantly less drinkable than a lake in similar terrain.

Not the answer you're looking for? Browse other questions tagged natural-resources water mining .

3
Using capillary action to bring water up to flying cities
9
How to get rid of human waste without using bodies of water
2
Extracting all water from Ganymede?
4
Is there a scientific phenomenon allowing to repel water without using strong heat or wind?
2
natural water filters, natural water de-pollution
4
How big are the waves created by water falling from an absurdly large pipe into a quarry basin?
10
How efficient would pumping water uphill be using hydropower?