Could someone survive a nuclear blast wave at the bottom of a pool? [closed]

I would like to have a character survive an atomic bomb as close to ground zero as possible. Using this handy tool it seems that a 1 megaton bomb has a fireball radius of 1 km, a blast wave radius of 7 km and a lethal thermal radiation radius of 12 km.

Since the main concerns are the heat and the pressure of the blast wave, it seems both could be mitigated by diving to the bottom of a pool before it hits. Would the thermal mass of 2-4 meters / 6-12 feet of water be enough to prevent you from frying? Would the density difference between the air and water buffer against the pressure? How far away from ground zero would you have to be for this to work?

Note that I'm not worried about radiation (the character can die of radiation poisoning soon after) but bonus points if you mention how much exposure one would get at a survivable distance.

As survivors from Hiroshima and Nagasaki showed, even the lightest of fabric provides enough stoppage from the thermal radiation to project your skin from the brunt of the thermal pulse. This will be an issue if they soak so much heat they start to char and burn of course.... but a pool of water? Oh yes, that will do just fine.

But we are getting ahead of ourselves... your question was as follows:

Would the thermal mass of 2-4 meters / 6-12 feet of water be enough to prevent you from frying?

Yes it would, and the closer to ground zero you are the better. This is because that — even if assuming that the pool would start to boil — it would do so at the top, because the thermal pulse is infrared, which water absorbs easily.

As the pool boils at the top, a layer of steam will form. This will "blanket" the pool and keep the thermal pulse from reaching the water below, like an ablative heat shield.

The reason you want to be close to ground zero is that there the dynamic pressure (i.e. the "blast" part of the blast-wave) will be very little. This would keep any such steam blanket from blowing away.

So surviving the thermal pulse and the heat of the fireball at the bottom of a pool, yes, that will work, and will also keep you from the worst of the radiation pulse. The shock-wave will be mostly reflected, and the blast-wave will be small due to the proximity of ground zero.

This however does not mean guaranteed survival. Here are a few problems you need to contend with.

The crux for you is that the peak intensity of the thermal happens near instantly after the blast. Unless your character knows what is about to happen, they will need to be in the "shade" as the detonation initiates. Any thin metal roof will or parasol will do. But it is required that they are there at the moment of detonation or they will be set on fire.

Ok, so your character survived the first minute under water. Now they need to come up for air. What are they coming up to?

Everything is on fire. And even if the worst of the nitrogen oxides have been pulled up into the atmosphere by the rising fireball, you still have a hellish firestorm producing smoke all around you. There is no clean air to breathe, even assuming you ignore the radiation for the moment.

Solution: they are an amateur diver

This may sound far fetched but unless your character is an enduring protagonist, here is an everyday scenario that yours truly have experienced, and that hundreds of thousands of people do around the world every day:

They were practicing scuba diving

Your first scuba dive will most likely be in a pool. Before letting you jump into the ocean, the instructors commonly let you get acquainted with the diving gear in a nice calm pool. Also during certification you may very well do some of the checks in a pool. Proficiency checks, and/or checking the status of your own gear after you have your certificate can also be done in a pool. 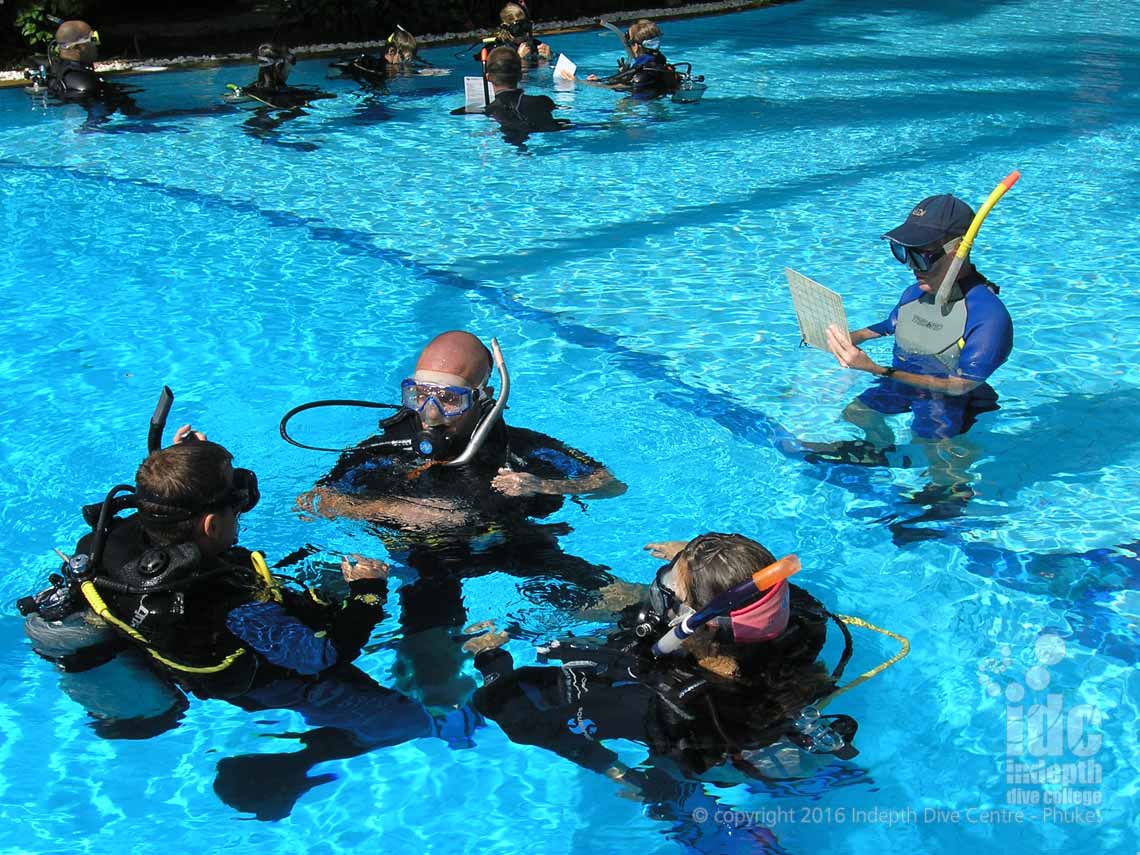 A common sight at diving outfits around the globe

This means that your character — at the moment of detonation — can be suited up in a wet-suit, covering them from head to toe. If they are wet from before, even better. This will make them survive the first few seconds of blinding light and searing thermal radiation.

If they have their wits about them, they can just grab a tank, and dive head first into the pool. This lets them stay below for as long as it takes for the worst of the firestorm to abate. Plus they also have an air tank (or several even as they were with other divers) to provide them with air for the initial part of the mayhem.

"Yeah but what are the odds that a random character..."

They were not a random character... they were visiting — or a member of — a diving club. Extremely lucky for them as individuals, yes, but not at all strange when looking at the city as a whole. You are writing about them specifically because the fact that there were divers and doing that at that moment is what saved them from instant incineration.

I'm going to take a stab at this.

The heat generated by a nuclear blast can reach extremely high levels. We are talking about the kind of heat normally not seen outside of a star, 100 million degrees. That sounds like a lot!

The one thing going for your frog is that it's a relatively a brief event. The blast's fireball takes about a minute to die out. Such a brief period may help. Also, as the upper layer of water vaporizes it will act as insulation for the water below to a small degree. With the amount of heat we are talking about, that may not count for much. But, coupled with the briefness of it all, maybe there is a chance. I don't think so, but let's do some rough calculations. As a caveat, let me say that thermodynamics is not my strongest subject.

To vaporize a body of water takes about 5 times the energy needed to boil the same amount of water. In the case of water that's 2257 joules/gram. Converted to calories/gram, that's 539. One calorie is the amount of energy it takes to heat one gram of water by one degree Celsius. With that in mind it would take direct application of heat measuring 539 C to vaporize one gram of water.

Next, how many grams of water are in the the pool? We don't know without knowing the measurements of the pool. Let's go at this from another direction, backward. We have in the area of 100 million C, so how much water could that vaporize, assuming it all gets transferred into the water. My calculator says, 185,529 grams which is 185.5 kg. Water's density is 1g/ml or 1kg/l. So, 185.5 liters of water would be vaporized. That's less than a cubic meter of water (1000 liters). It's also surprisingly small and promising (if my back of the envelop math is right), I didn't expect that and I'm not sure I trust it giving my amateur status with thermodynamics.

So, if I'm correct, the heat generated may not be the biggest problem for survival.

Next, we have to think about the force of blast. That's a harder thing to figure on the pool of water. There are so many factors. Location of the blast in relation to the pool. Terrain around the pool. So, lets look at it another way.

The force of a nuclear blast will not only level unfortified structures but move the resulting debris with ease. The blast wave will last up to 20 seconds. So, how much mass could it move in that amount of time?

Well a one megaton device could be equivalent to 4.18 x 10^15 joules. That's 4.18 billiards (yeah, that's what it's called). That's a heck of a lot of power. I have no idea how to convert that into numbers we can use. However, 850lbs of commercial grade explosives was all it took to blow a cement truck into tiny bits. One of those trucks is easily 10,000kg. I believe the explosives used were stronger than TNT however the details were not all shared, or if they were I don't know them. If we assume that the blast from that video was equal to 1000 lbs, half a ton, of TNT then a megaton device would have enough force to move 2 million trucks like that one. Just because we don't know the exact details of the explosives used, lets take half of that number. So, one million trucks at 10,000kg each. Ten billion kilograms of mass could be displaced by such a blast.

Yes, that's a guess but I would call it a good one. Even a tiny fraction of that power, say 1%, would move a lot of water. From there we are back to details about the pool and it's location in relation to the blast and so on.

Maybe this could serve as a jumping off point for others to add to. So, community, feel free to edit and add.

Not the answer you're looking for? Browse other questions tagged science-based physics nuclear or ask your own question.

8
(How) Can I make directional nuclear blast?
4
How many people would survive the nuclear winter after a full-scale nuclear war, and where?
5
Apocalypse design help. Is there any life-sustaining atmosphere which an atomic blast could ignite?
0
Could someone use a nuclear weapon to destroy the universe?
3
What will happen to a spent nuclear fuel pool without routine maintenance?
6
Death from Space: Taking out an Enemy Fortress by Launching a Destroyed Space Ship at Them
9
Figuring out the math for the Sphere of Meteoric Conversion
10
Hurricane-force winds or gentle breezes in an O'Neill Cylinder?