What's the Optimum Shape for a Radially Symmetric Brain?

I think the idea of radially symmetric alien organisms is really exciting in the questions it raises about function and design.

For those who don't know, humans are bilaterally symmetrical. If you slice down the middle of a human, you get 2 symmetrical halves. So if half a human has one eye, one ear, one arm, one leg and one brain lobe then both halves together have two of each thing. Blatantly obvious, but bear with me.

I'm designing a "human" that's tetramerically symmetrical. That's an animal made up of 4 symmetric slices. Therefor my radial human would have 4 of each thing total because there are 4 slices.

Not a hundred percent finalized on this design, but each slice of the face would have a large eye in the middle, so it would have 360 degree vision. I may have to cheat and have two nostrils in each slice, since just having one right below the eye may make pinpointing smell harder.

Not quite sure on the ears yet, that'll be another question along with how the mouth would work. There would be 4 arms and legs total, likely with a ball and socket joint in the wrists for improved manipulation.

This thing is freaky as all get out, But I've been struck with a question. There are 4 brain lobes, but this brain obviously wouldn't just be two human brains stuck together. They need to be placed in a way that optimizes communication between all four lobes.

How would this tetramerically symmetrical brain need to be shaped/laid out to function properly?

Okay, maybe I'm talking out of my bilateral butt here...

Let's imagine each brain-slice is like a wedge of layer cake. Top layer is cortex. Underneath is their analogue of parietal lobe. Underneath that is analogue of temporal lobe, and so on.

Our brains evolve by ... balooning out and wrapping another layer around the outside. Your tetra-guys will add layers vertically. Maybe a layer splits into two.

This way, when the wedges all come together, the pieces line up. You can have special connection tissue (analogue to corpus callosum) around the outside and between the layers (think "icing").

I would love to see what schizophrenia looks like in these guys... ;D

You could imagine arranging the brain lobes like the segments of an orange. The spinal chord could depart from the center, with the brain lobes arranged vertically in the skull. There would need to be some rewiring of the eyes and the optical nerves. However, you could place the visual processing close to the center of the skull as well, so that the information from each eye would be processed together to provide a full 360 degrees vision.

Out of curiosity, would your humans look like these? 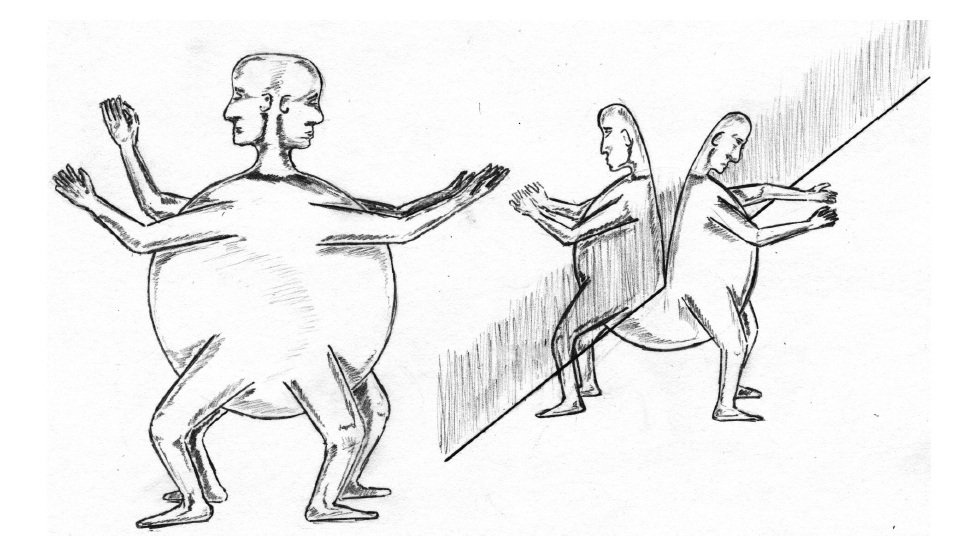 It is very difficult to imagine higher degrees of symmetry because of specialization.

On Earth we have several Classes (Coelenterata come to mind) that have higher symmetries, but they are invariably at "low end" of complexity with a very rudimentary nervous system.

Note these animals do not have a "brain" but rely on distributed nerve ganglia.

As soon as complexity rises we see two things happening:

The first is an adaptation to a preferred direction of movement: it makes sense to be able to turn left or right with equal ease, but complexity of being able to move in whatever direction means you move "less well" in any direction... something Evolution won't allow for long.

The second is tightly linked to eye development; eye (retina in particular) is literally a piece of brain that crawled out of the skull (both as evolution and as embryonic development). It triggered formation of a large mass, very near to eyes, to interpret incoming images.

In the case of a really symmetric being it is very likely the preferred motion direction would be along the symmetry axis (the line where symmetry planes intersect). This is kind of difficult to imagine (again medusae come to mind) in a terrestrial environment.

Perhaps You should describe better your Tetramerical Humans.

I can make an argument for four or eight lobes in four fold symmetry, the twin lobes of the human brain allow us to process bilateral inputs quickly and effectively, your four fold human may or may not have bilateral inputs depending on the set up of stereo sight, sound and smell, if the segments each have stereo inputs you need eight lobes to process that data effectively but if, on the other hand, you have stereo sound, etc... made up from inputs originating from separate segments then you only need four lobes but they have to communicate very well so the majority of the brain is going to be connective tissue similar to the human Corpus Callosum.

I would expect from your description that your person would still have only one stomach, one colon and anus, one bladder, one spleen, one gall bladder, one spine, but 2 ribcages, one penis if male, one vagina if female. I could see them possibly having 2 Penis if male, or 2 vaginas if female. Would they have one or 2 noses? (I am thinking one). BUT 4 nipples (& 4 breasts if female)), 4 testes if male, 4 ova if female, 4 ears, 4 hands, 4 arms, 4 legs & 4 feet. 4 Lungs. MAYBE 4 kidneys? I am thinking they would DEFINITELY need to just have one cervix/ Womb if female. The hip and pelvis would be fairly complex to design so it can be functional..

I am leaning towards one skull - therefore a brain that looks fairly similar to our existing 2 hemisphere brains, - but divided into quarters instead.

This would lean me towards 2 mouths, 2 noses, 2 sinuses & 1 windpipes but 2 esophagus. You would have the option to correct a slight flaw in the design of the human body, by having 1 mouth connected to just the stomach - which would avoid the potential for choking death, from food getting lodged! 1 mouth would be still connected to the lungs - but would only be used for speaking.

But perhaps instead you will end up with a human that is somewhat like the Pushmi-pullyu creature from Doctor Dolittle?

You could this way end up with 2 separate skulls and brain cases - which means you will not need to redesign the brain at all. They would look quite radically different from humans as we know them however...

Not the answer you're looking for? Browse other questions tagged creature-design anatomy brain or ask your own question.

20
Minimum brain size for consciousness?
61
What are the conditions in which a creature would evolve more than one brain?
6
Rehab/ Recovery for Brain Transplant
9
How to keep the brain alive?
6
Visible light from the brain
4
Multiple "brain-backups" in the spine, how would it work?
2
How to increase the cognitive ability of the human brain without increasing the size of the cranium?
4
Where can the brain be arranged inside the torso?
1
How would radially symmetric, saltatorial monopedal creatures plan out underground towns for movement?
3
What needs to be changed in the structure of the human brain to make it as smart as possible?