I'm a xenobiologist going on an expedition to a habitable planet about 14 LY away. We don't expect to find anything amazing - maybe some bacteria to study - but lo and behold, the place is teeming with all sorts of complex life.

How do I classify these creatures? Do I use the old naming conventions from Earth? They won't fit well, because most of them can't be strictly placed under "plant" or "animal" and they exhibit...well, alien behaviors.

Should I just slap another term on (Origin, Kingdom, Phylum, etc.) to specify the planet of origin and make up new terms for these aliens, or start from scratch with something new and more fitting, possibly causing a great upheaval in the world of nomenclature as I do so? Or should I just use plain English for now and let someone else give them fancy names later?

The answer is "yes." You do all of the above. Each system serves different purposes.

The first big division to focus on is laymans' names versus scientific names. You will find that a realistic community will have both, because they serve different purposes. Laymans names are more focused on practicality. Two things that are obviously different will have different names. Two evolutionary similar things with different uses may have very different names. They are easy to remember and easy to teach. Scientific terminology, on the other hand is designed to support science's key tenants: repeatability and reproducibility. When you write a paper and someone tries to reproduce it, it's important that they can identify the exact same species.

As a fun example, consider two stinging beasties that we deal with as divers in the ocean. The first is the hydroid: 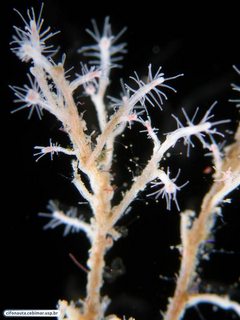 These little buggers hang out on rocks. If there's nasty weather, they break off and the little pieces can sting you. The next baddie is the jellyfish: 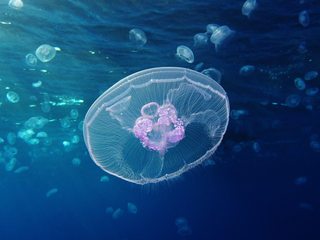 We all recognize a jellyfish when we see them. Some are extremely poisonous, others like the moon jelly above are more cute than anything. Now these are layman's names. They're easily identifiable, and practical. The scientific names may be less practical. The first picture is of Turritopsis nutricula, in the class of Hydrozoa. The latter is Aurelia aurita, of the class Scyphozoa (a class that is typically known as "true jellyfish").

Now what about this guy? 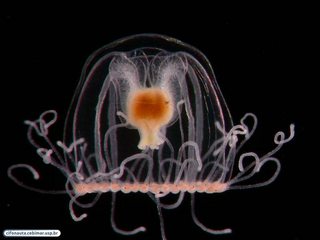 He looks an awful lot like a moon jelly. In fact, his layman's name is the Immortal Jellyfish, for its unique ability to return to its larval stage if needed. Scientists, however, call him Turritopsis nutricula. If this doesn't sound familiar, look up a bit. It's the name of the spiky looking hydroid I showed a picture of earlier. These are actually two pictures of the same species, in different parts of its lifecycle. The former was a picture during its hydroid stage, rooted on the ground. The hydroids then emit tiny "medusae," which are the jelly-fish like things we know and love. The scientific name is far more concerned with a precise name for the species than it is the convenient identification at a glance.

Now not only do we have two pictures of things which may be given different layman's names but the same scientific name, but we also mentioned the different classes. The idea of classes is relatively new. It only started to appear in the 19th century, and only gained fame as Darwin promoted it. The idea that everything is connected evolutionary into a phylogenetic tree is quite a new concept as far as science is concerned.

Which points out the next piece of the puzzle for you. Eventually you will want to put a new level at the root of our phylogenetic trees, indicating the different origin planets. This is mentioned in other answers, but here we can see why. The explicit purpose of these trees is to show a common genetic heritage. There will be no common genetic heritage between Earth and your planet 14LYr away (or will there?). Thus, you should not borrow from any of the existing branches of our tree. Branch off lower, and start a new one.

However, that will come later. It took a long time to figure out all of the different branches of our tree of life. And, honestly, it's not that helpful to anyone outside of a biologist who is actively researching deep evolutionary history. You would probably start with just a genus and species (such as Turritopsis nutricula or Homo sapiens), and start cataloguing that obvious part of the tree. Later, as you learn more about the planet and it's history, you'll be in a better position to solidify the lower branches of the tree with the evolutionary history. But, in the mean time, genus and species is so effective that we typically refer to all living species by their genus and species (it's also called a "binomial name"). Sometimes we even abbreviate the genus (such as "H. sapiens") because there's enough information there to provide all the scientific precision required.

But while you're giving things scientific names, you will find they get layman's names as well. My garden has Solanum lycopersicum, Daucus carota, and Spinacia oleracea, but if you were to ask me what's in my garden in a conversational setting, I'd tell you "tomatoes, carrots, and spinach." You can see why the laman's names have a use!

I like using Orgin as a taxonomical descriptor. I would put it as a level above the three Domains (Eukaryota, Archaea, Bacteria). Then make this planet's taxonomic tree (Maybe make the two Orgins "Terra" and "Extraterran" or whatever your planet is called)

Since (presumably) the life on this planet has no relation to Earth's life it doesn't need to be classified into our taxonomic tree.

As for the naming of the different things, you can probably describe them in English then go in with the Latin later. You pointed out that they don't fit cleanly into plant or animal, and that they are alien in behavior. That must be something observable and quantifiable, and therefor useful in classifying these species.

Take a look at how our taxonomic levels originated and see how you can apply it to your planets wildlife. (Ex. What kind of symmetry does the thing have? Does it have a backbone? Does it have limbs? How does it reproduce? Is it trying to bite your face off? These are the kinds of things a biologist really needs to know.)

Old habits die very hard among humans; therefore, my assumption is that the biological community will resist anything other than using, as you call it, an origin prefix. It's what they're used to. Consider how difficult it's been to extend, for example, I.P. addressing beyond the original IPv4 nomenclature. Classifications have a philosophical "inertia" that is very difficult to change, even when it becomes obvious that they should (because the effort of changing everything in the past is greater than suffering yesteryear's short-sightedness in the future).

However, it's worth noting that regardless of the wondrous imagination of science fiction writers, life in the universe will very likely be similar to our own. This isn't to say that it isn't possible for there to be something completely different out there, only that the odds are in favor of life being water/carbon-based. Therefore, while the habit is to add a prefix based on location (and it's likely to happen as a convenient form of cataloging), the more valuable prefix would be those that identify a new "life fundamental." (E.g., lifeforms based on silicon, etc.)

Build a new system AND also use the less efficient old system.

If your new system is more practical, over time it will become the only system in use, at least by the scientific community that takes the time and effort to learn it well. Lay folks may still enjoy the older system, whether it be for easier understanding, tradition, or because it is more aesthetically pleasing.

An example of this is when over 10 years ago a Wisconsin county decided to rename the rural roads with numbers for easier fire and emergency response. They kept the traditional word names on the signs with the new numbers, as locals still prefer to call them by the names they've known for years, and the new naming system also works well for its intended purpose.

A possibility for the new system could be built using DNA sequences in the naming, which could leave lots of room for newly discovered species to be worked in, since they would definitely have different unique sequences. This assuming the aliens also have DNA similar in structure.

I’m sure there would be a positive biological bunfight over the naming conventions. In the meantime the guys on the ground would have a field day (literally). If they had enough time and resources they should be able to figure out some of the important biological taxonomic divisions and give some of the species some provisional names.

If they were good at their work a lot of the taxonomic divisions and names might even end up being officially recognised. At the very least they would act as a temporary framework to allow for investigations to proceed in a coherent manner.

Although they weren’t expecting to find quite so much life, I would have thought that some contingency plans would have been made, especially as they were expecting there might have been something similar to bacteria present.

Not quite of the same magnitude, but of relevance, I see that that 20 new phyla have recently been discovered in the domains of bacteria and archaea. For those not familiar with biological phyla, all insects fit into a single phyla (insecta). And all animals with backbones fit into another.

And that’s kind of big in the world of taxonomy as there are currently only 30 phyla in the entire domain of bacteria. I wonder how long it will take them to sort out that nomenclature wrange?

I agree with adding a new taxolevel on to the left of the name, "Origin".

For a long time now I would have liked to do that. (But my spaceship's in the shop, darn it!)

Anyway, I would abbreviate each level by one letter to form (with Origin) an eight-letter species code (being an old mainframe dog, I have a penchant for eight-letter names).

My code (and yours too) is EACMPHHS (Eukaryota Animalia Chordata Mammalia Primata Hominidae Homo Sapiens).

The first letter comes in handy for Star Trek fans too; such as K for Klingon and T for Trill.

I feel like you have your answer already, Just add an origin prefix to the syntax.

Possible syntax : Origin - genus species The hyphen is an arbitrary syntax addition for readability, like the capitalisation of the first letter in the genus. Feel free to change that.

A colony of first generation martian humans would be Maris-Homo sapien.

Not the answer you're looking for? Browse other questions tagged aliens language .

4
How would two alien races decipher each others language?
7
How alien can a language be - transmission?
9
Alien Periodic Table of Elements
15
Alternative to writing for creatures without eyesight?
1
"Alien" superintelligence learning human languages
5
Scientific Accuracy - How could Homo Sapiens effectively communicate with this aquatic alien?
4
Possibility of two-way sign language communication between humans and non-humanoid, dexterous alien