How can a sunken city, Atlantis disappear from the sonar?

It is still a myth as far as our modern civilization is concerned, Atlantis located somewhere within the devil's triangle and it's inhabitants had struck down many planes and vessels daring to disturb the peace. Without resorting to magic how can Atlantis disappear from the sonar? (Answer with most primitive tech wins.)

Reasonably, an underwater city would not particularly look like the cities we are familiar with and would not be recognized as a settlement unless someone goes and looks at with Mark II Eyeball.

They would have no interest in roads. So there would be no easily discernible grid. Transport and travel would then happen above the buildings using some sort of flotation devices and draft animals. Always available "water transport" beats roads.

In modern times these would probably be replaced by vehicles. If the atlanteans can breathe down there no hard, acoustically reflective pressurized hull is needed, so making the vehicles stealthy should not be particularly hard.

With no need for roads and vastly reduced level of fire hazards buildings would be built wall-to-wall. Bulk transport within the city could be then handled by connecting the buildings. If you have horizontal channels or rings with one-way traffic you can make the water move and cargo transport becomes a matter of putting stuff into the channel and taking them out from it. Speed would be limited, but a system like this could have very large cargo capacity.

The system might work well enough that there is no need to transport cargo over the city. At that point you'd have lots of small ventilation holes and closed (sharks not welcome) vehicle hatches.

If the buildings of the city were of roughly same height this would look like a featureless plain to sonar as long as the atlanteans do not use metal construction on top.

The city would then only be visible at the edges where the buildings rise above their surroundings. This would probably be fairly simple to hide by just letting detritus from the construction accumulate against the walls. Additionally there is no real need to make the buildings that high. The good economics of water transport and lack of city walls would allow the city to spread and significant part of the height of the buildings might be below the level of the surface. I think it would blend naturally unless someone specifically looks.

So even without particular effort to hide from sonar, a realistic underwater city might be entirely invisible to sonar by virtue of being entirely different. No tech beyond neolithic (city building) required.

When Atlantis was sinking, the residents knew about it only slightly in advance. Being sensible people, they rushed into their basements and shut the doors. One atlantis had sunk, they dug between the basements to form a network of underwater/underground rooms. They somehow figured out how to get air down there (and how to build airlocks), and decided there was no reason for them to move. Over the past thousand years, the sea gradually destroyed all of the buildings.

If you know what to look for the doors aren't hard to find, but the lack of above-sea-floor structures make it almost impossible to locate on sonar.

Atlantis located somewhere within the devil's triangle and it's inhabitants had struck down many planes and vessels daring to disturb the peace. Without resorting to magic how can Atlantis disappear from the sonar?

You already need magic or very advanced technology to justify a city existing underwater. However, given that Atlanteans somehow either have or don't need air...

Atlanteans still can hit ships with colossal bubbles of methane, that have the same effect on a ship as a torpedo (they make the supporting water underneath disappear, so that the ship's weight cracks the vessel in the middle). Additionally, a delayed fuse can turn the bubble into a fuel-air bomb, capable of taking down a plane if it flies low enough.

The problem, possibly requiring magic, is now how they know that there are ships and even planes above, and where very exactly they are and how fast they're going - it takes time for a methane torpedo to hit.

In an old short story I wrote years ago (but never published because my writing was meh), I figured that Atlantis was sitting on the top of a volcanic island and during an earthquake, the city that had overdevelopped to the point of weakening the soil, fell into a nearby oceanic trench upside-down. The city remained mainly intact, but the city acting like a plug at the top of a bottleneck, the citizens never could escape to the surface again.

Here is a pic of what I mean (sorry for the language in the image, I was on the version of this wikipedia article when I took it): 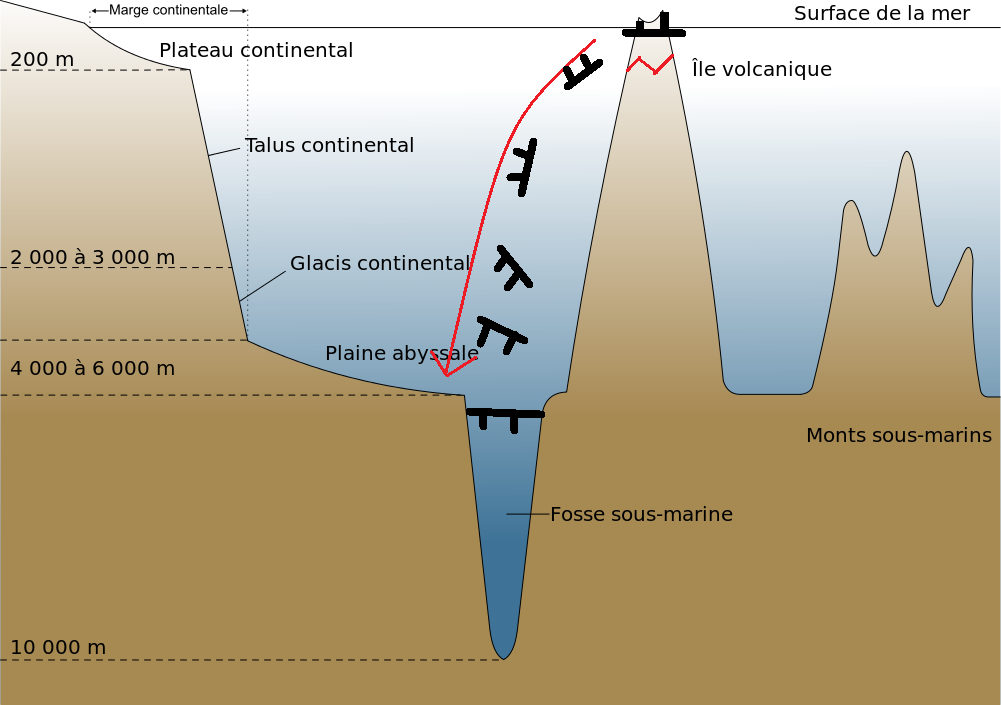 Thus making the city undetectable by any means without resorting to magic.

If the Atlanteans wanted to be invisible to radar they could use materials similar to the rubber like tiles used on submarines. If they needed a particularly primitive version of this then large amounts of organic matter, especially seaweed of the sort with the flotation air sacs, would be useful in deflecting and absorbing sonar if strung out above their city.

Not the answer you're looking for? Browse other questions tagged technology underwater .

4
The Vertical City
11
How could there be underwater thriving city in the medieval age?
4
How does privacy work if govt can access every camera throughout the city?
5
Weapon that can destroy an underwater city?
6
How to Salvage From a Sunken Spaceship
7
How can you breathe underwater?