How much muscle mass would be needed for a genetically modified human to move his ~1 metre long foxtail?

I would like to genetically modify a human being in one concrete case like I did in other parts of my little series of How would it affect a human to suddenly... This time I would like to add a pretty long foxtail and get a feeling for how much muscle mass would be needed to make the modified human able to move his new tail around.

The foxtail will be an appendage to his coccyx and I would like to ignore the question about How this transformation exactly happened. For this little experiment I want to use simple up-scaled data from the Arctic Fox, which normally has around 55 cm head-and-body length plus 30 cm tail length. To make it easier I will assume that the length of the tail is roughly half the length of the head-and-body. Thinking about humans head-and-body length is quite different from what we normally perceive as height. Still, using the normal height seems convenient and postulating that the human in question is supposed to be around 1.80 metres tall we get a tail with a length of 0.9 metres. Let's pump that up to 1 metre for ease of calculating stuff.

The above shows that I am not really picky about numbers when genetically modifying humans, but I would like to get a feeling for the amount of muscles needed to have control over such a long tail. For example the arctic foxes can, according to the linked Wikpedia article, curl up into a little ball of fur when sleeping so that they won't lose as much body heat. And it would be quite bad if the tail was always dragging around the floor.

I couldn't find any numbers about muscles needed for tail control. Furthermore my knowledge of how tails work in animals is best called rudimentary. I would like the human to be able to control the foxtail in such a way that he can for example wrap it around himself like a little fluffy blanket.

If you need more information about what I have in mind I can refer you to a picture I linked in my first question on the site (The role of anthropomorphic foxes in a medieval army) which is of the League of Legends character Ahri. The picture depicts multiple tails that are far longer than I am interested in for the scope of this question, but it might give you an idea of what I want the tail to look like and be able to do as you can see how the different tails twist in different ways.

If I simply scale a fox's tail to the above size how much muscle mass would I need to add to my human? It would be very nice if answers could compare this number to something else that might be easier to grasp, for example whether this would be more muscle mass than people normally have in their biceps.

First, this image may help you get a feel for tail anatomy. It is a fox who has lost all of its hair, either due to a genetic disorder or mange, but you can see how much tissue there actually is to the tail. That is why holding them up all the time takes so little effort. 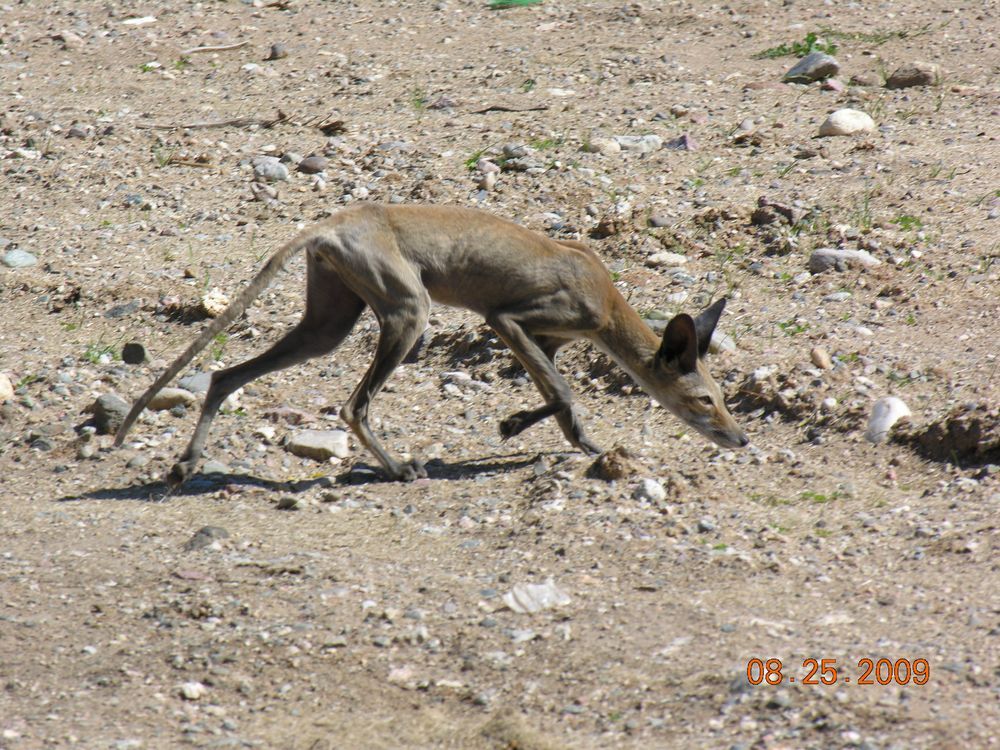 You can have a look at the musculature in this image from this site. 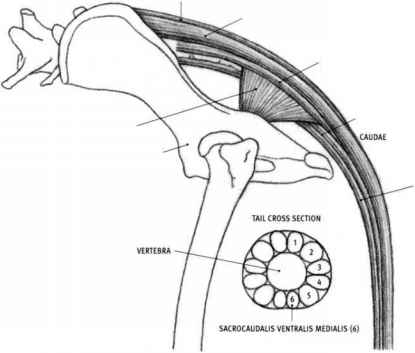 Now let's work on our estimation. The musculature of a cat and dog tail is identical, and you will have more luck finding information on cat tail masses in that range. Cat tails are proportionally longer, but that will not affect the musculature or weight estimate significantly since we are not going to use body mass of your people. Body mass based estimates would not work for such a different body anatomy, so instead let's find a tail close to what we want.

Cheetah tails are something we actually have a little data on but it is all estimation. No one has been willing to chop off tails of an endangered species to get mass estimates. A large cheetah's tail is around 80cm long and weighs about ~1-2kg. That's just about perfect since a fox's longer hair will add length getting us to at least the 1 meter you want. So your entire tail should weigh about 1-2kg. Now we have to do some back of the envelope calculations.

A tail is basically little more than skin, muscle/tendon, and bone.

Let's start with the upper estimate. We shave off ~20% to account for the skin and hair, so that gets us ~1.8kg.

Bone weighs half as much as muscle on average (3:2), but the muscle makes up about 3/5th the volume of the tail, so let's call it a wash for simplicity and say half the remaining mass is muscle. That leaves you with about ~0.9 kg of soft tissue. The majority will be muscle and/or tendon in the tail.

For comparison in humans, the entire tail is about the mass of a single foot, from ankle down, while the muscle weighs about as much as a single hand from the wrist down. I don't know of any information about how much individual muscles weigh so I can't give you a comparison of a human muscle. There was even a StackExchange question about it that never got a detailed answer.

Keeping the tail off the ground will not be an issue, it does not require much tension. No large mammals habitually drag their tail after all. If the tail is the same length as the torso and head it should barely reach the ground as it is. On an average human, the distance from the top of the head to the tailbone is the same as the distance from the tailbone to the ground. (Humans have really long hind limbs.) Even a partial curl will keep it off the ground.

The muscles required for movement of the tail are rectococcygeal muscles.

Its primary function in most animals is assisting with the bodily mechanisms for elimination.

However, in animals with tails

In many animals with tails, such as horses and dogs, the rectococcygeal muscles are involved in the response to the raising of the tail during defecation.[6] In tailed animals the muscle attaches to vertebrae in a more caudal position than in humans due to the additional vertebrae in the tail, in dogs there are connections to the 5th and 6th caudal vertebrae and in horses to the 4th or 5th.

While this information about the rectococcygeal muscle gives some preliminary concept about the muscles needed for human fox's tail, it may be assumed that the necessary musculature may be similar to that of the dog.

The canine tail usually consists of between six and 23 highly mobile vertebrae. These vertebrae are enclosed by a versatile musculature that make the various segments, especially the tip, capable of finely graded movements that lift the tail, move it from side to side, or draw it down toward the anus or between the hind legs. The caudal muscles lie on the lumbar vertebrae, sacrum (in the lower back region) and tail vertebrae. The muscles insert on the tail/caudal vertebrae exclusively. The muscles are attached to the tail vertebrae by tendons. The most posterior tendons attach to the last tail vertebrae.

Part of the musculature is formed from muscles associated with the rectum, the anus and the pelvic diaphragm. Four to seven paired nerves serve the tail muscles. These muscles have many tendons that insert from the fifth or sixth caudal vertebra, then onto the next vertebra, and so on to the end of the tail.

Regrettably none of this information gives sufficient idea about how to determine, precisely, the muscle mass for the fox tail of a GM human. However, it may be able to provide an approximation of the necessary musculature.

It would seem that some humans do have tails, although it’s a very rare occurrence. 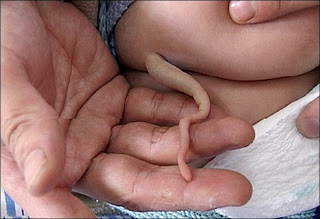 If you want to know about the musculature required the obvious example to use would be new world monkeys or other similar species such as the Northern Tamandua. It really depends on what you want them to do with the tail. Do they need to be prehensile? If not, then I doubt they would need very much muscle.

A 1 meter tail would therefore weigh 250 grams. The muscle would be a small fraction of that; the bones would comprise the bulk of mass.

That the tail is on a human is beside the point. The answer is the same if your creature is a human or a large fox.

It depends on a number of factors. A tail that simply hangs from the rear would require less musculature than one that is held erect, or can sway from side to side. Additionally, muscle mass can be built up with exercise - if they exercise their tail by doing things like lifting weights with it, the tail will have more muscle than it would if they were just moving it normally.

23
The role of anthropomorphic foxes in a medieval army
8
How would it affect a human to suddenly have the visual senses of a martial eagle?
12
Would the diet of a human have to adapt if he suddenly had a ~1 metre long foxtail?
11
How to achieve cat-like agility?
6
How to correctly insert a kangaroo like balance and support tail in a humanoid?

19
Anatomically Correct Naga
12
Would the diet of a human have to adapt if he suddenly had a ~1 metre long foxtail?
3
How heavy would a Naga be?
18
Lizardfolk and the problem of balance and anatomically sound tails
4
Increased flexibility for dragons?
2
How could be useful a long and flexible tail for a living flying mechanism?
5
What would a human genetically modified to thrive in low gravity look like?
7
How long and heavy can a tentacle tail get relative to the animal it's on?
4
Anatomically Correct Tarasque