Realism of this Respawning Creature

I am writing a story (well, developing one) in which a humanoid intelligently genetically engineered species is effectively immortal. The creature maintains its lifespan through a thick-shelled seed about the size of a child's fist which rests below the heart. Within the seed there are exact copies of the creature's DNA and a brain-like neural structure which preserves some memories.

Upon the creature's death, the seed sprouts in a large bulb (about 3m tall and 2m in diameter) which encases the new "resurrected" form of the creature with some of its previous memories preserved. The bulb opens when the humanoid is sufficiently developed and the life-cycle continues with a new seed forming during puberty.

(NOTE: The bulb begins growing when a number of factors - circulation, brain activity, temperature - convince it that the creature is in fact dead. It also releases a chemical which breaks down the corpse of the creature into more useful components which the plant can use to sustain itself.)

I don't really care if the creature is actually two different life forms that sustain each other in some mutually endosymbiotic way.

How realistic is it for a complex organism to have two stages of life where one is a plant performing photosynthesis and the other being an animal similar in size and energy requirements to a human? Or how can it be made more realistic to achieve these qualities?

The Cassiopea jellyfish has a life cycle similar to what you describe (except for being human sized!) 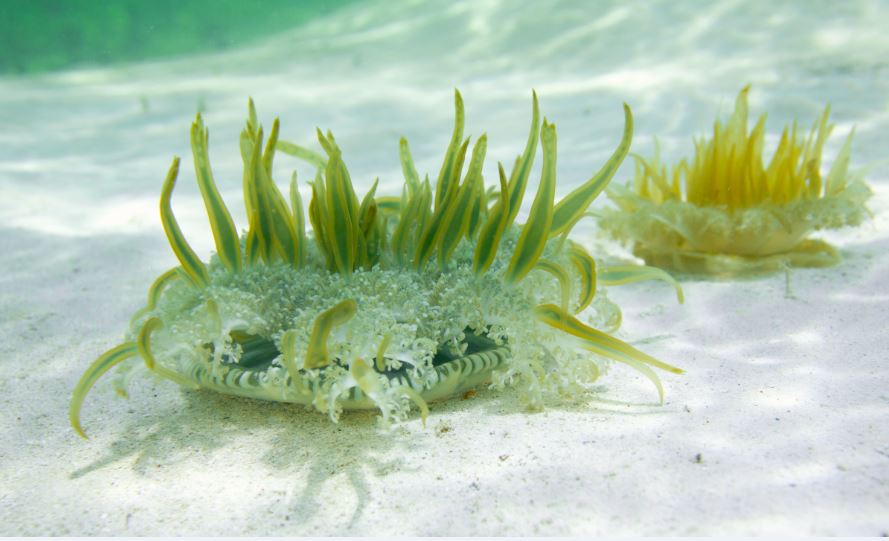 These jellyfish start life swimming around like any other jellyfish, doing jellyfish things which I consider to be fundamentally animal-type things. This is a dispersal phase. When the jellyfish finds a nice sunny shallow sandy bottom it flips upside-down and starts a sedentary plant-like life, living off the proceeds of their internal photosynthetic symbionts.

Clearly a mobile dispersal phase is of great benefit to plants (and everything else) and there are many different ways to accomplish this end. @Henry Taylor is right that the most common way is to recruit animals which are already mobile, the evolution of fruit being the crown jewel of this mutualistic endeavor. Mobile seeds are good and I think your approach must just encounter evolutionary barriers to its development. It sounds like it could be a good creature.

Metamorphic organism are not unknown. For example, caterpillars and butterflies or the motile larvae of what become the sedentary coral polyps.

This hypothetical organism is possibly a more extreme version of an organism like a coral. The main difference is this creature metamorphoses into a plant-like that is then capable of gestating a humanoid which inherits some of the memories of its preceding humanoid life cycle stage.

There are animal that do have life cycle stages that are sedentary. Corals, as cited above, are one example. But organisms with a secondary memory storage cache are certainly unknown on planet Earth. Despite the apparent improbability of such a mechanism evolving it is in principle not necessarily impossible. Indeed this is true for the different elements of this organism's life cycle. The combination seems immensely improbable, but nature is full of remarkably improbable organisms and plants.

The plant stage may take a long time to grow the humanoid for its next phase. That's because photosynthesis isn't exactly the most energetic of processes. It might make more sense if the plant-like stage wasn't an actual plant but more of a very large sedentary animal that resembled a plant.

An organism like this could be realistic if it was a part of an environment where creatures like this were more natural. Basically this means could be other creatures with approximately similar life cycles. On planet Earth we have a considerable of metamorphic organisms.

Not the answer you're looking for? Browse other questions tagged science-based reality-check evolution xenobiology .

3
View of Death in Respawning Species

4
How could a creature like this evolve?
6
Killer seeds for the sake of early plant growth
8
Is this DNA absorbing creature possible?
6
Is this Martian creature plausible?
6
How to design a proper void whale?