Size of the “Monster Hunter” planet

Imagine a world in which you have all the creatures from the game franchise "Monster Hunter"... 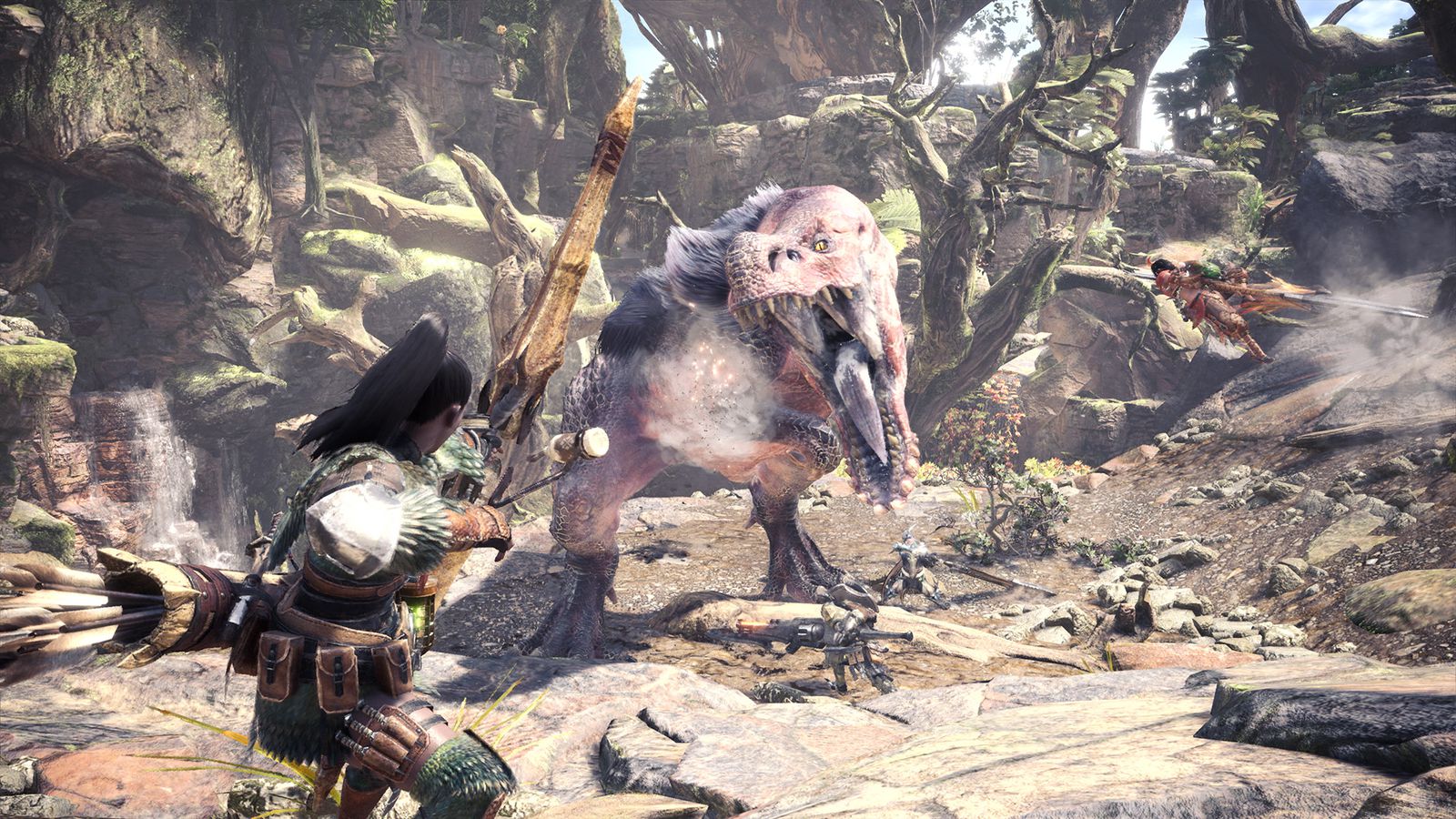 ...and when I say all the creatures I mean enough creatures of each species that they are all genetically viable.

Knowing there is HUGE monsters (like Jhen Mohran), they live in HUGE natural areas (maybe not in one place for all the being of one specie).

What could be the size of such planet also taking account there is some hunters (obviously) killing them down ?

"Naïve" answer: our tiny planet has hosted species of all sizes, ranging from amoeba to Apatosaurus

Today we cannot get anything bigger than an elephant of a blue whale, and the planet size has not changed.

On Earth, the thing that prevents creatures getting any larger than they do is gravity. If you want bigger animals, you need a lower surface gravity.

Of course, Mass = Density * Radius^3 (for a sphere), so assuming that you wish to have a similar composition (and so density) to Earth, surface gravity is directly proportional to the radius of the planet, and so you will want a smaller world.

Of course, if you make it too small then the atmosphere might escape, but that's a whole other set of problems.

The reason the dinosaurs were so big was mainly due to the higher levels of oxygen available in the atmosphere. According to this, this was also the reason why all arthropods were also much bigger than today. This because they "absorb" oxygen through their carapace. This method of breathing is limited and thus the higher oxygen level is what enabled them to achieve the size they did.

This also applies to all other animals that breathe or need oxygen. A higher oxygen level while all other parameters are maintained, enable an increase in size.

In your case, the only real thing your planet would need is not an increase in size but an increase in oxygen levels. This can easily be accomplished with greater flora or more "efficient" plant life.

I read an article that I cannot find now that stated that one of the factors for greater oxygen levels in the prehistoric era of the dinosaurs and even before them, was in part due to the fibers and cells in trees of that time. Bacteria and smaller insects didn't know how to process these substances and later evolved to do so. But when they could not, the dead trees simply lay there and didn't decay as they should. This lead to less carbon dioxide emissions as well, also being a cause for bigger arthropods and the like.

To be able to produce a planet that could sustain massive animals such as monster hunter animals, increase oxygen levels. Their size, as mentioned being ~400meters, should be irrelevant since a planet the size of earth is still absolutely massive. If you want to, just increase the size to your liking and change the composition of the planet to have a mass that equates to 1G, but is bigger in volume. In short, greater volume, lower density.

Rather than try to think of how big an area is required to support all the different species, a different approach is to simply ask how big could a planet be given what we already know?

Judging by the picture the monster hunter world is an earth similar planet with exotic creatures that appear to be adapted to around 1g. If the surface gravity is 1g and if the planet has the same composition as Earth then the size of the planet must be the same as the Earth. The planet could be bigger if it were less dense than Earth. But how much less dense might it reasonably be? Assuming that it’s a rocky planet like the Earth the obvious way of making it lighter is by removing the iron core.

So halving the density allows a doubling of the radius for the same gravitational force. Therefore the monster hunters plant can’t be that much more than twice the radius of the Earth.

There might be a bit of wriggle room for the following reasons but each of these is limited:

Not the answer you're looking for? Browse other questions tagged planets fauna universe species or ask your own question.

67
Can you simply scale up animals?
23
Maximum size of an exoskeletal creature
14
Just how big can I make this dragon?
13
What is the minimum planetary mass to hold an atmosphere over geologic time scales?

16
Ratio between planet-size and terrain elevation?
0
If Earth was returned to a 'natural' state could it break down present human culture?
9
Would it be possible for an Earth-like planet to have multiple moons with diverse biomes capable of supporting life?
1
Size of the universe, zipped
21
How do I maximize a planet's wave height (on average)?
3
Would a monster size aquatic lizard be possible?
7
Rotation, weight and planet size