What determines whether or not tribes will form into larger groups?

Before the development of states, kingdoms, and empires, all humans were confederated into tribes. Since then, of course, things have changed. Many tribal groups banded together defined their own boundaries, and formed into states and nations.

My first thought as to why this sort of thing happened was that it was based on agriculture. Babylon and Mesopotamia rose up out of agricultural societies, after all. I'm not sure this is a good explanation though, since it seems like there are cultures that practiced agriculture but did not form such states, like the native North Americans, and also nomads who founded empires, like the Mongols.

In general, what drives a stateless, tribal society to from into larger kingdoms?

This is a great question, with serious applicability for worldbuilding at large.

Lots of useful answers so far. I've got one, if I can express it well enough, that goes down to some very basic questions about human ecology. First though, lets get some terminology down:

"Tribe", according to the general definition in the Wikipedia article means:

"A tribe is viewed, historically or developmentally, as a social group existing before the development of, or outside of, states. Many people used the term "tribal society" to refer to societies organized largely on the basis of social, especially familial, descent groups (see clan and kinship). A customary tribe in these terms is a face-to-face community, relatively bound by kinship relations, reciprocal exchange, and strong ties to place."

In other words, we can use "Tribe" to mean either

This seems to match the original question's intent.

There are basically three kinds of associations in history that predate states and that rely on intuitive, rather than explicit, theories of political legitimacy. These three types of community are fundamentally distinguished by their ecological characteristics. They are:

[Note: I got most of the foregoing from The Rise of the West, by William H. McNeill; originally published in 1963, it's still in print and not freely available online. FWIW, I'd recommend it as a resource for any worldbuilder interested in the processes of prehistoric and historical development of human communities.]

In late prehistoric and early historic times, we see a three-way struggle for supremacy between these three human ecologies.

The hunter-gatherers got shouldered aside pretty early. They were, in general, too close to the margin of survival to compete effectively. Those who weren't absorbed into agricultural populations were generally pushed into more remote or forbidding areas: forest or desert mostly, or the icy lands of the north.

The hunter-gatherers could live in these areas because hunting and gathering are pretty sustainable if given time to adapt. Nobody else wanted those places. Neither nomads nor agriculturalists could grow food very well in those places.

The retreat or vanishing of the hunter-gatherer people cleared the decks for a rather dramatic, millennia-long struggle between agriculture and pastoralism. Pastoralists tended to be militarily far more formidable, because keeping predators away from the herds meant that courage and violent skills were desirable characteristics. Also, once they learned to ride horses, their mobility and cavalry tactics tended to present a formidable challenge to the settlements of agricultural people.

The increasingly large settlements of agriculturalists, on the other hand, were at a disadvantage. Not only were they less martial by cultural training (farmers with brawling, violent temperaments are less efficient at sowing and harvesting, and cost the community more in incidental damage), they had a lot of good stuff to loot. Stuff that nomads hadn't learned to make, or couldn't make or grow.

Thus came the great aggregations. Smaller agricultural villages were too vulnerable, once the nomads appeared on the scene. So they began to grow, and build fortifications, doubling down and to make arrangements for mutual defense.

Faced with these hardened targets, the nomads also developed larger bands, but they seldom had the staying power of the settlements of civilization.

The nomads created mechanisms of joint war parties, ad hoc expeditions whose goal was to plunder a foe too large for any single nomad tribe to take on. These eventually tended to develop into habitual associations: confederacies of nomad people who sometimes didn't even have much of a common language.

Yes, there were the grand imperial ventures of Attila and Genghis Khan and Tamerlane. However, the Pax Mongolica only lasted some two hundred years, and Genghis's empire was, although vast, too closely tied to his own formidable persona. It was, in a sense, just an incredibly large instance of a "tribe", with Genghis as the titular Father figure: an ancestor that bound his polyglot empire together.

The concepts of political legitimacy that the agricultural peoples haltingly pieced together over centuries never found a very comfortable home in the wild hearts of the horse people.

So, the original question:

What determines whether or not tribes will form into larger groups?

Has this basic answer:

The pastoralists, even as they responded to the increasing size of agricultural opponents by increasing their own political groups into confederacies and Hordes, remained tribal at heart.

Ok. First, the Math. As the area you control grows, you get a better border-to-interior ratio: 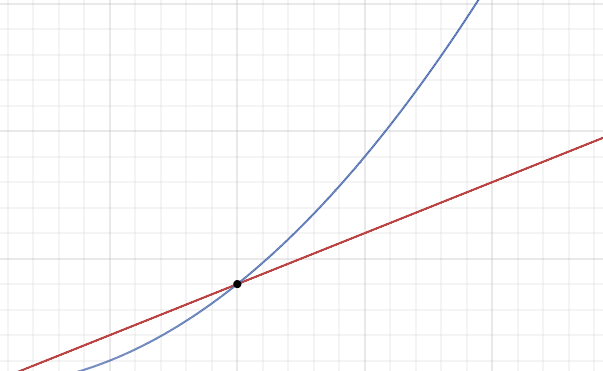 This is because your border size scales linearly (the red line) but the interior grows with the square of your average width/length (the blue line). So the bigger you are, the easier it is to defend your territory compared to the resources you control.

Now obviously not all polities are squares (actually I'm not sure any polities are perfect squares), but geographical features act as "free" border - they increase your ratio by either reducing the resources you need to secure it, or limiting your enemies to only attack certain areas (mountain passes, natural gulfs or bays, etc).

So, bigger area = less proportional resources needed for defense. This frees up your workforce to do other things, like agriculture, pottery, or blacksmithing. Good geography gives you a boost, so you can get some of the benefits in a smaller polity.

Second is Technology. This is obviously very broad, but let's break it down into a few key areas:

The real key is what happens when all the above combines. When you get a larger polity, you can defend it easier. This frees up some of your population for other tasks, which eventually leads to be better technology, improving your overall efficiency. Now you have the capability of expanding against your less-efficient neighbors (either through politics, economics or warfare). Now you're bigger, go back to step 1 and repeat.

Obviously there are a lot of places in this process where you can mess up and your empire fractures, or you run into someone else ahead of you on the curve and they take you over. But the basic feedback loop is the driver of early polity growth.

There is a wide array of reasons, but I'll focus on one of the major ones I see. In many cases, it's a single persons ambition (I should add "ambition plus luck")

There are several examples of Vikings and their leaders carving out kingdoms for their own.

For the most case, tribes (and city states) are loyal to a single person...with no abstract concept of nationality or king or country, the loyalty is to that single person (or perhaps dynasty of people). That single persons ambition often drives the mve to kingdom.

THe other side gets into common defense...agriculture becomes a big thing simply because you now have a stable population of decent size that can remain in one area. This leads to buildings and wealth and eventually an economy...you suddenly have something you don't want to lose. But even then, it's usually a single leader that goes about uniting several like cities into a nation/kingdom.

I think a quote from the civilization series...A multitude of leaders is a bad thing, let there be one ruler, one king. How ambitious that one ruler is in becoming King tends to be the driver behind the formation of kingdoms.

I think generally it's a form of self preservation. The larger your 'group' is the better you can defend what is yours from those who would want to take if from you. If you are the biggest group in the neighborhood, then you can even go on the offensive and be the one taking from others.

One of the reasons agriculture seems to make this more obvious is two things. One: plants are stuck in one location and thus need to keep others away from a known location. The farther the boundaries the harder it is to raid what's in the middle. Two: agriculture more easily allows for larger populations to be fed. Larger populations means more people available to defend what is ours or take what is theirs.

Being a social animal also helps encourage the group dynamics.

Groups form when they are more resilient or more enjoyable than being on their own.

Survival on your own is hard. You spend most of your resources on survival. Aggregating groups cuts down on duplication, so you free up more resources to work with. Consider that each tribe needs a shaman whose entire life is dedicated to the art. However, if tribes merge, eventually they can decrease their needs from one shaman each to one shaman between them all. That makes larger groups more resilient.

However, there is another side: when you merge groups, you have to make compromises. Your particular way of sowing the field, naked as can be, may have been effective on your own, but your new found friends don't appreciate the *ahem* scenery. You have to find a new way to sow the field -- most likely clothed.

As long as the benefits outweigh the costs, groups will eventually merge together (or at least ally).

As a detail, the human mind appears to be structured to handle several particular sizes very well. Each group feels a little more alien than the last. These sizes show up in countless cultures, over structures both social and military:

Three mechanisms that favour the apparition:

As for mechanisms agains the apparition of nations:

In all of the cases, I see technology as a factor improving the apparition of states (by improving wealth, communications and trade)

$^1$ Even in the case of the Muslims, the first caliphate lasted only thirty years until the first civil war, and the second one less than 90 years. After that, a caliphate remained, but with many of their former territories independent.

Not the answer you're looking for? Browse other questions tagged civilization tribes .

5
What would drive the native tribes of Australia to form a kingdom?