How would the human eye need to change in order to see in low light without any changes to physical appearance?

In my world there are humans who have undergone a mutation from being exposed to a certain kind of magic. They have not realized they have been mutated until they start noticing that they have the ability to see well in the dark (low light, not total darkness). Outwardly, they look the same as they did before the mutation, which is why no one noticed they had been mutated. They can also see just fine in the daylight as before.

I'd like to avoid a 'they can see in the dark because magic!' situation, and put more focus on the effects of mutation and how their eyes have changed biologically.

So, biologically speaking, how would the human eye need to change in order to see in near darkness without any major changes to physical appearance (like larger than normal pupil dilation)? Also, could this happen without jeopardizing the ability to see in daylight?

The retina is finally turned the right way around

If ever you have poked around in the Evolution vs Intelligent Design debate, you will have noticed the irreducible complexity argument that says that the eye is much too complex to have evolved, so it much have been designed by some intelligent being.

Well that supposedly "intelligent" being then did something really stupid:

They mounted the human retina backwards 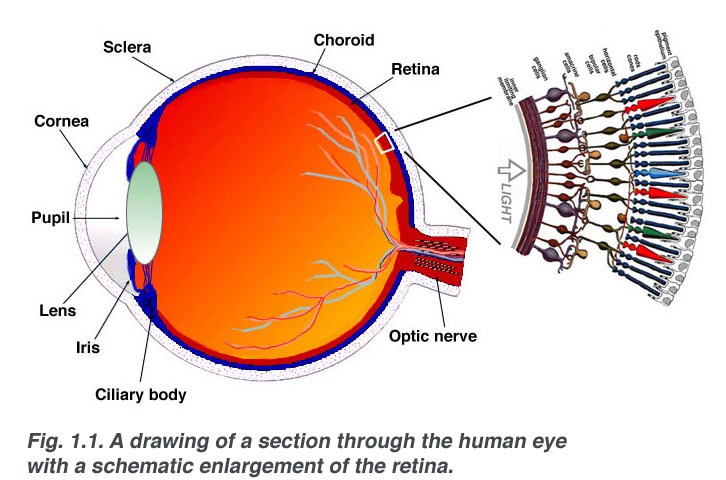 The light sensitive parts of the retina are to the far right. Lots of junk that light has to pass through before getting there. (Image source)

In an evolutionary mishap, the human retina became such that the light sensitive parts of it is pressed up against the wall of the eye, while the nerves come out inside the body of the eye. This is inconvenient for several reasons, including getting a blind spot in the eye, and having much less light sensitivity than we could have had.

So the easiest way your magic mutation can give us much better vision than before is:

Also we have another really silly peculiarity. In low-light conditions, our most light-sensitive cells are not in the center of our field of vision but on the edge. This means that we can see things "out of the corner of our eye", but as soon as we turn to look at them, they go away.

And in order to protect the eye and make it less painful to experience this brighter light, especially in sunlight...

This is because it is mostly UV that hurts the eye in strong light conditions, not visible light, or at least not quite as much.

All of these things can happen without any visible change to the human appearance...

...except that instead of getting red pupils in a photograph, they will get green dittos. 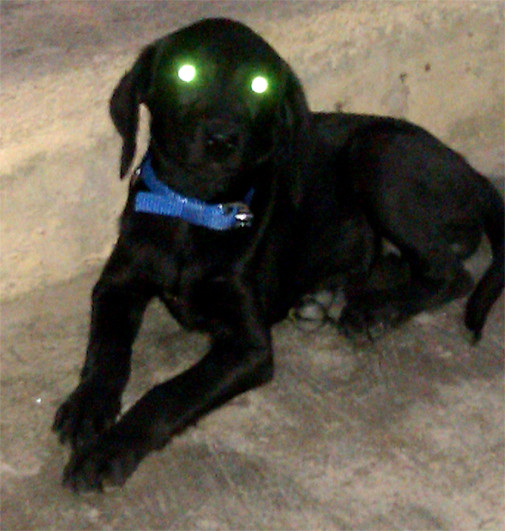 Dogs, cats and more get green eyes when photographed thanks to the tapetum lucidum.

Real life adaptations to increased night vision include increasing the density of rod cells in the eye and dilation of the pupil. With normal human eyes, you adjust to the dark in about 5-10 minutes. Nocturnal animals have adaptations like specialized rod cells or a tapetum Lucindum that maximize the low light levels at night.

The problem with biological adaptations seen in nocturnal animals is that it may make it harder for your humans to see different colors and focus on things in bright light. With magic you could have them adjust quicker to darkness and dilate their pupils at will, but I don't know how to trade off the downsides.

I'm not sure if this fits your definition of "They can see in the dark because magic", but allow me to provide a shift in focus:

Their eyes are noticeably mutated and do change in appearance in darkness. However, they are magically concealed. Instead of trying to come up with a -probably inaccurate to some extent- semi-scientific eye model that is largely superior to the human eye without being aesthetically different, isn't it easier to actually let their eyes be different, but people just don't notice it? Of course, if there's magic in your setting, there are ways to suspend this illusion, and a powerful enough mage/sorcerer/wizard etc would potentially be able to see through that kind of thing, but if they're in your average village or city, there's most likely not going to be one of those powerful people around.

That being said, here's an alternative answer that actually(maybe) responds to your question:

Probably not. Either they would have the thing that cats and dogs do(Which would make their eyes reflect light as if they were a mirror depending on the angle) or they would have a lot more of rod cells(which would either affect their ability to see in daylight, as if they had photophobia, or cause their pupils to contract absurdly when exposed to "normal" lighting conditions). I can't really think of other ways to see in dark ambients that are natural, but perhaps if they could perceive that ambient without relying solely on vision(Something sonar-like) it could be done and they wouldn't necessarily have an all-enhanced hearing, you could get away with them being able to hear what a normal human does and the frequency of the sonar without hearing the frequencies between them.

Not the answer you're looking for? Browse other questions tagged science-based internal-consistency biology humans vision .

17
What sort of problems might occur if every human gained extra muscle mass?
16
Could it be possible to be near-blind in daylight yet see perfectly at night?
38
How to modify the human eye to see into the ultraviolet and infrared bands?
5
Would the sub races of elves really evolve?
0
How is petrification by venom scientifically plausible?
10
Realistic darkvision?
3
Is it possible to grow new organs through exposure to radioactivity?
5
Is the existence of vertically shaped pupils, with a hawk eyesight, biologically possible?
5
How can I cool the body of a human such that it can see Long wavelength IR light without its eyes glowing
8
At what age do you age the least?