How do I grant superheroes gravitational manipulation, justified scientifically?

Superheroes! Everybody loves them! (Though maybe not as much as magic.) The point is, I have a world with super heroes in it. I have a pretty good system of power granting, and have basically divided the available power sets into three main types: biologic powers (like super strength, super speed, elasticity; basically anything that can be explained by biology alone), thermodynamic powers (pyrokinesis, cryokinesis, aerokinesis; powers explained by locally violating the second law of thermodynamics) and gravitational manipulation, which includes light-bending and telekinesis.

This last one is the annoying one: Biologic powers have only the one body to worry about and thermodynamic powers can be explained with some mumbo-jumbo about quantum mechanics (though I might ask about it later), but gravitational manipulation requires ridiculous amounts of mass-energy to be feasible (after all, a measly refrigerator magnet can hold up a paper-clip against the pull of the ENTIRE EARTH), and that ridiculous amount of mass-energy will cause nasty side effects, like tidal forces or skooming. How do I grant powers of gravitational manipulation without killing my superheroes in new and interesting ways?

There are several things to consider:

-I can make do with gravitational manipulation not actually manipulating gravity, so long as it can produce light-bending and telekinesis by the same process

-Telekinesis must not rely on air displacement; it must also avoid visible distortions of the object telekinete's appearance and (especially in the case of personal levitation) must avoid tidal forces

-Light-bending should only bend light; passing through an invisibility bubble should only change the field of view, although I can make do with slight nausea, and the same goes for gravity lenses; lasers are supposed to be deadly, so it doesn't matter as much there

-The method of power granting is gene-editing by viral infection followed by consumption of the necessary materials, hence why biologic powers are the easiest to explain; the energies required for gravitational manipulation must be harnessed by metabolism (and how the virus knows which bits to modify will be another question)

-The more plausible the science, the better (hence the science-based tag), but I will accept some crazy pseudo-science if nothing better comes along

-Bonus points if anyone can figure out force fields; unlike the Invisible Woman or Violet Parr, they should not be coupled with light-bending, but be a third power type granted by gravitic manipulation

Short answer
Primordial black holes and associated worm holes may be a key to harnessing, and overcoming the limitations of gravity.

Background
The general relativity theory of Einstein basically says that gravitation is not a force, but instead a manifestation of the curvature of space-time (source: NED). Basically it states that a massive object does not pull on another object, but that instead it bends space-time such that it appears to be pulled to the massive object by a distant observer (Fig. 1, upper panel).

Now, you don't want your super heroes to be like Atlas tossing around heavenly objects. Here, black holes become interesting, because they can be as massive as stars and beyond, but can be substantially smaller, because their density is infinitely larger than a celestial body. Black holes are regions in space where the pulling force of gravity is so strong that light is not able to escape. The strong gravity occurs because matter has been pressed into a tiny space. This compression can take place at the end of a star's life and some black holes are a result of dying stars. Because no light can escape, black holes are invisible without sophisticated observation equipment (source: New Scienist, 2013).

Black holes can come in a range of sizes, but there are three main types of black holes, dependent on its mass and size. The larger two types, i.e., the stellar (and most common) and supermassive black holes are not of too much use for your story line I guess. However, the smallest type is known as the primordial black hole and this type of black hole can be as small as a single atom, albeit with the mass of a large mountain (source: New Scienist, 2013).

Now, such primordial black holes may be the gateway to singularities. Singularities are the core of a black hole, where the gravitational field is infinitely strong. At that point, entering it will likely cause anything to be crushed to an infinite density. However, general relativity provides no basis for what happens next. Basically, at thus point, all our known physics law cease to apply and all known equations break down (source: New Scienist, 2013). Different models explain the behavior of travel within a singularity differently. One model predicts that eventually gravity again reduces and objects can re-appear in another part of the universe, or another universe altogether. This has been described as a worm hole (Fig. 2). Worm holes are your gateway to, well anything related to gravitational tricks I guess (pun intended). 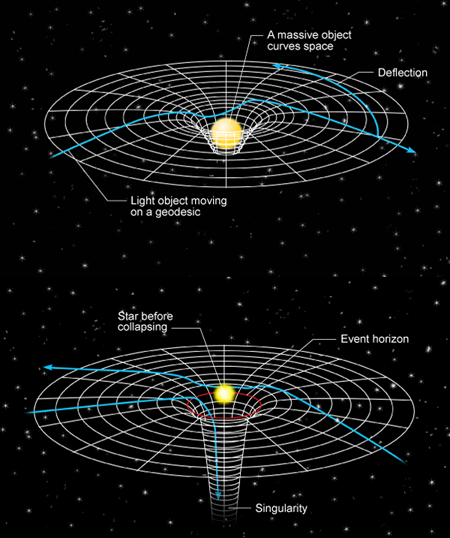 Fig. 1. Black hole (top) and singularity (bottom). (Top) Einstein’s general theory of relativity states that gravity is a curvature of space-time. A massive object, such as a star, deforms space-time, such that another object such as a planet or a light beam follows the shortest path (a “geodesic”) on the space-time grid. To an observer, this looks like a deflection of the trajectory of the planet or light beam caused by gravity. (Bottom) A black hole can be so dense and massive that it creates a region of infinite curvature (a “singularity”) so that inside the event horizon light cannot escape. source: NED) 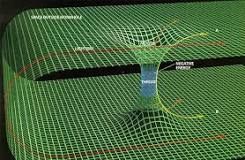 Fig. 2. Visualization of a worm hole. source: Physics of the Universe

Not the answer you're looking for? Browse other questions tagged science-based physics gravity super-powers relativity .

23
Gravity magic - How does it work?
4
How to Use Gravitons for Telekinesis?

4
How might a superhero gain heat control powers?
72
How to harness Jupiter's gravitational energy?
2
Hitting a Thermokinetic With a Bullet
3
Is there a way to trap a super-being like Dr Manhattan?
10
Can I justify pyrokinesis / cryokinesis in a psychic-style magic system?
2
How can I have gadget-using superheroes?