How to Use Photosynthesis Creatively in Humans

I've seen many questions here about humans being capable of photosynthesis. And I know, humans don't have enough surface area to power themselves full time. However, that's assuming that the energy from the photosynthesis goes towards our calorie intake.

What is photosynthesis anyway?

Hmm ... photosynthesis in and of itself is pretty specific: energy from sunlight is used to split water into oxygen, which is discarded as useless junk, and a bunch of hydrogen, with a bonus ATP (energy storage). The energy and hydrogen are then used to turn carbon dioxide into a carbohydrate, aka sugar. Hence photosynthesis ("light" + "putting-together"). Read up on it in detail; chemically it's amazing!

So what do you want to focus on?

Hey it's driven by sunlight!

There's some room to play with here. While not enough to completely support a human metabolism, it sure could slow starvation. Only those wealthy enough to have safe food supplies would go around wastefully wearing shirts.

Hey, it's all about the chloroplasts!

Supposedly chloroplasts were once (the ancestors of) cyanobacteria which got assimilated into a eukaryote. Who cares? We do! Because you can extend this to say that for your world we can do this with any prokaryote. Sky's the limit. There are:

Hint: almost all molecules in the entire biological world exist in prokaryotes (I read this a long time ago; I believe that the article said there were a few exotic snake venoms and compounds in flowers which were not found in prokaryota).

You can make these optional, nice-to-have features, or vital to life, such that sunlight-deprivation is a major crime and plot point.

They don't have to be bacteria that exist on Earth; make up your own! They don't even have to be light-driven. They could consume sugar (or other compounds) to provide some service... Maybe there's one which eats sugar and gives off oxygen, making for a race of awesome divers

Okay, now it gets real

So okay, we have humans which have assimilated some wacky bacterium to give them an advantage. Who's to say all humans assimilated the same one? There could be several bloodlines/tribes/clans each of which has a different symbiote. Which could mean:

You don't need to look far.

Our bodies manufacture vitamin D when the sun's ultraviolet B (UVB) rays interact with 7-dehydrocholesterol (7-DHC) present in the skin.

This is a very specific and real kind of photosynthesis.

Kill parasites, or other unwelcome passengers.

In a competition between host and parasite, the host can take on stresses that it can deal with but which are too much for the parasite to withstand.

An example is the black noddy. It lies in the sun and its black feathers get very very hot. Lice die. Bird does not! 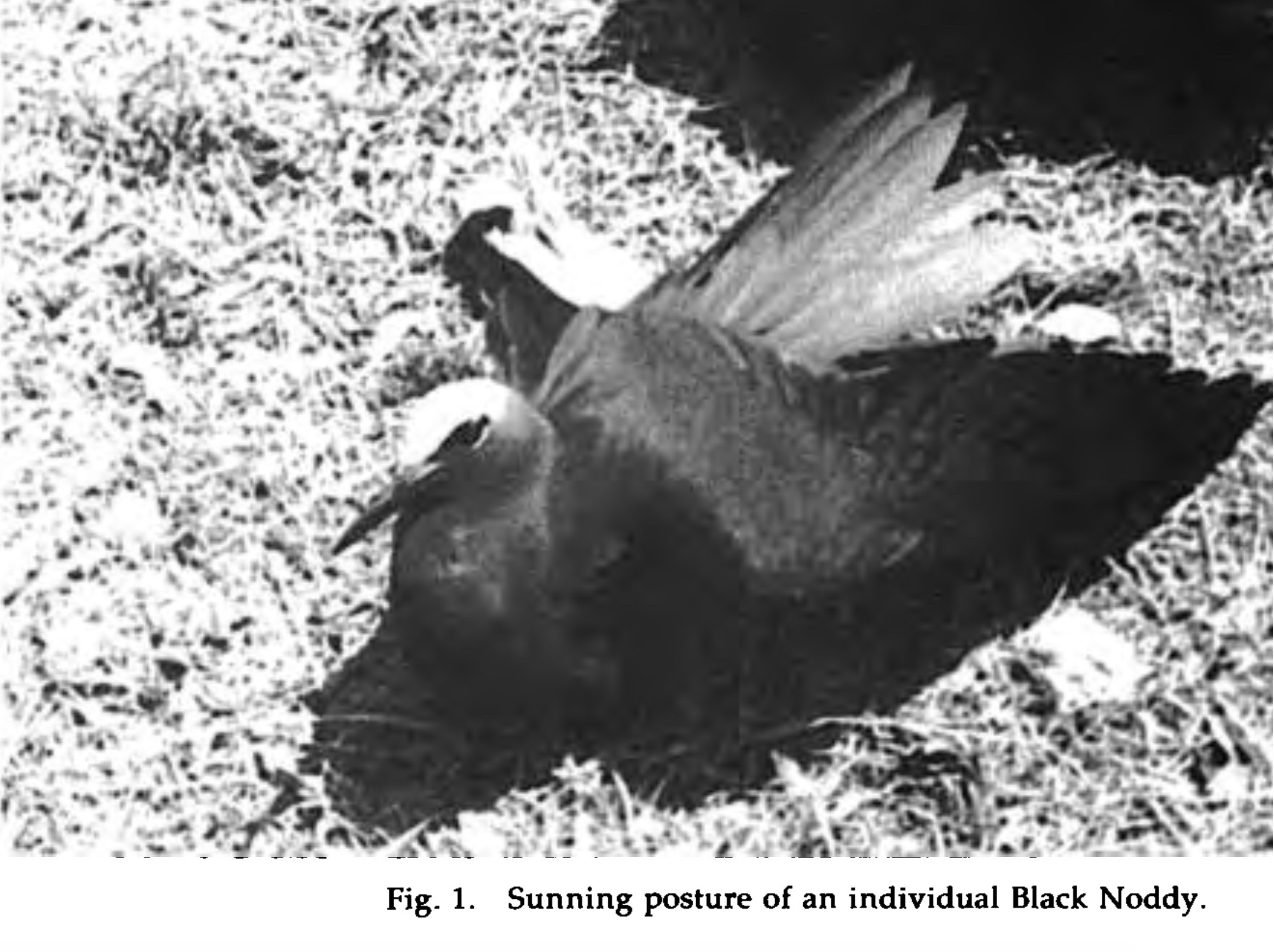 A somewhat analogous situation is photopheresis. Blood is removed from a human, treated with UV light and then returned. This cripples immune cells, which in this circumstance are probably foreign ones from a bone marrow transplant, attacking the host.

A similar but less technically sophisticated use of light as an immunomudulator is photodynamic therapy. In immune problems confined to the skin (or immune-derived cancers confined to the skin, like Sezary's syndrome) one can attenuate the immune response with UV. You can even do this with sunlight, although it is hard to charge the patient for that I imagine.

Psoriasis is an immune disorder of the skin. Here is a before and after picture showing improvement with phototherapy. 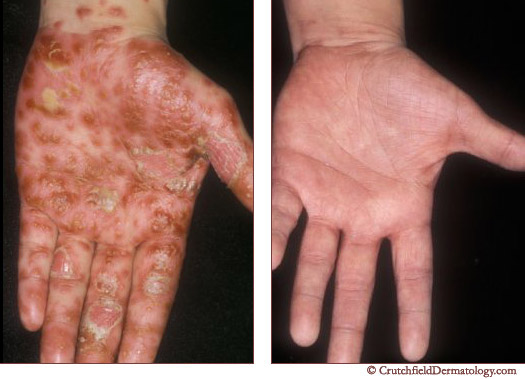 So: I could imagine a circumstance where humans either had an overacting immune system (overreacting to some alien antigen?) or perhaps a disease or parasite, and the UV damage produced by sunlight was beneficial in attenuating the immune system, or damaging the parasite.

It probably couldn't evolve naturally because there is not survival advantage linked to having it, but it would be interesting to have photosynthetic support for short term memory.

That could make the old wives tale of Optography possible.

Optography is the process of viewing or retrieving an optogram, an image on the retina of the eye. A belief that the eye "recorded" the last image seen before death was widespread in the late 19th and early 20th centuries, and was a frequent plot device in fiction of the time, to the extent that police photographed the victims' eyes in several real-life murder investigations, in case the theory was true. The concept has been repeatedly debunked as a forensic method.

In this photosynthetic version, it wouldn't be the eye which records the last moment of life, but part of the brain (supported and maintained by sunlight) which held the last few minutes of a victim's sights and thoughts. This could be used to drive any number of story plots...

Perhaps if the energy balance was different, the chances might improve. If “human” could be stretched to include a cold blooded or hibernating human, there might be sufficient benefit from some form of appendage with an unfurl-able photosynthetic surface. Such a structure could supplement the low level of energy required during dormancy on cold bright days. Over an extended period the meagre supply of energy obtained might just make the difference between life and death.

So to answer your question photosynthesis might supplement emergency survival energy when all other external sources were unavailable.

Not the answer you're looking for? Browse other questions tagged science-based reality-check humanoid photosynthesis or ask your own question.

26
Hydrogenenic Photosynthesis: Strategies for animals
7
Powering Adam Jensen
4
What stellar qualities would allow our Sun to support human photosynthesis?
3
Are all combinations of right-handed and left-handed amino acids and sugars equally likely?
6
Adapting humans to a permanent 1.5g environment
5
Genetic feature based crossbreeding of various demi-human species
7
How could this flora/fauna symbiosis work?
2
A desert planet with temperate polar regions could sustain how much plant-life? Any?
8
How could formamide lakes form on an exoplanet?