In my world, there are underground ruins from an ancient civilization. There are giant insect creatures living in these underground cave-like ruins, ranging from the size of a large dog to the size of an elephant. They are attracted to these ruins due to a magical aura it gives off, and have a natural resistance to it. The attraction is so strong that they don't leave the underground caves to gather food from the surface, or for any other reason. The same aura makes other animals die.

There is no light coming into the underground caves, but there is a natural supply of water that makes its way down into these underground caves. Plants don't die from the aura, but since there's no light, plants have a hard time living there.

Are these conditions too unrealistic for such a creature to thrive?

What else would need to be present in this environment for giant insect creatures to have sufficient food so that they could thrive in large numbers?

Edit: Thank you everyone for the great answers! You've all given me a lot of really interesting things to consider. This community is awesome.

You need an energy source other than the sun. The main alternative is reduced sulfur that can be oxidized for energy. Organisms that can do that chemistry are chemotrophs and so far all are bacteria. Either the bacteria themselves can form the plantlike base of the food chain or larger organisms with symbiotically associated chemotropic bacteria can be the base. Or both! 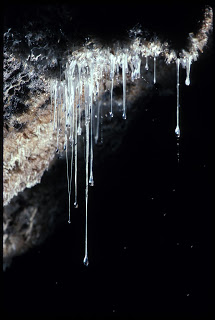 Snottites are the thick mucoid colony structures formed by cave dwelling chemolithotrophs which get energy from dissolved sulfur compounds in the water. From link 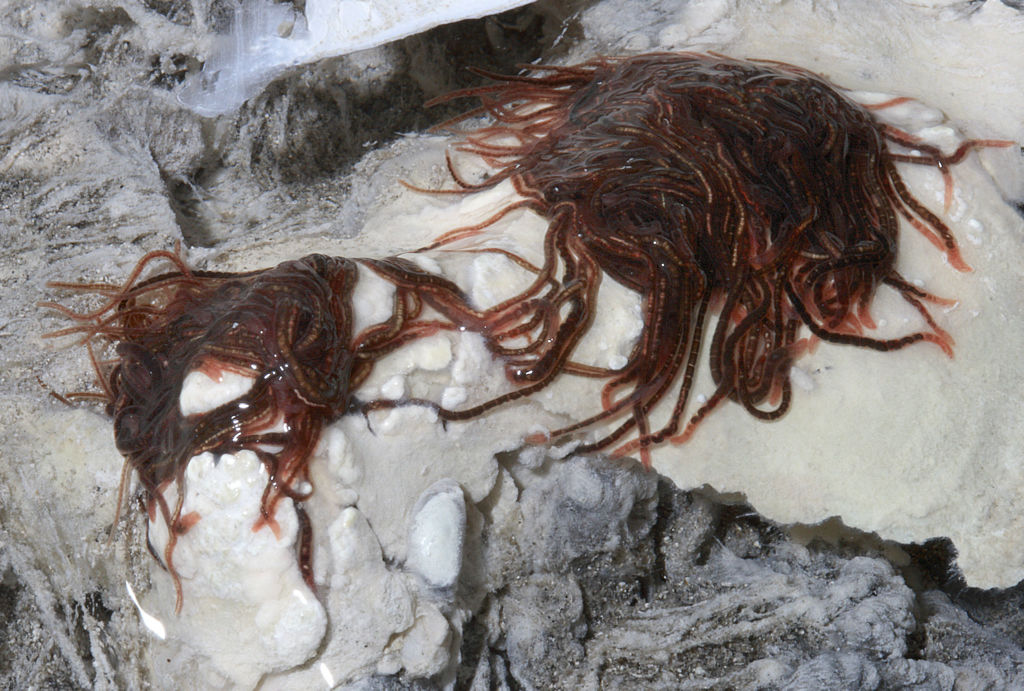 These worms in Colorado’s Sulphur Cave are believed to live on the chemical energy in the sulfur in the cave, similar to deep-ocean tube worms. On the left are streamers—colonies of microorganisms similar to those in hot springs in Yellowstone National Park. PHOTOGRAPH BY NORMAN R. THOMPSON

I am suspicious that these worms might actually just be grazing on bacteria. But maybe they do have chemotropic bacteria colonies inside them, like the tube worms.

I learned the word "exosymbiont"! These live in the Frasassi caves in Italy; interestingly the Wikipedia article on these caves does not mention what is practically exobiology; Google hits only scholarly articles. These amphipods are covered with filamentous sulfur metabolizing bacteria, which form their food source. 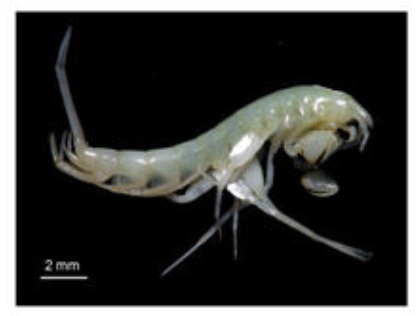 Niphargus ictus is the numerically dominant macroorganism in the sulfide-rich Frasassi cave ecosystem and has been the sole amphipod species reported to date from this location [14, 29, 30]. It thrives in the sulfidic streams and pools found in various parts of the cave, and a possible explanation for its tolerance to sulfide may lie in its symbiosis with chemoautotrophic sulfur-oxidizing bacteria of the genus Thiothrix [31]. Such chemoautotrophic symbioses are common in marine environments [32], but appear much rarer in freshwater where the N. ictus symbiosis is the only example reported to date.

An interesting side note as regards the "aura". Hydrogen sulfide (H2S) is the reduced sulfur molecule which is oxidized for energy in these sulfur ecosystems. H2S is a toxic gas which smells horrible to us - like rotten eggs. The amphipods shown above are unusually resistant to H2S. I could imagine they might be attracted to it since that is what their exosymbionts and food live on. Maybe that is what the bacteria get out of the deal - in exchange for providing a food coat for the amphipod to graze, the amphipod can smell out H2S and move towards it so that its coat has food. Maybe your aura is H2S? Science is cooler than magic!

Have you considered your creatures would not eat at all?

Basically they spend their lives as a larva before coming to the cave. During the larva stage they eat enough to supply them for the rest of their life. After the larva stage, the transformation makes them immune and drawn to the aura.

Some crocodiles assumingly can go without food for over 3 years, other species even longer. Also it's not uncommon for insects to not be able to eat in their final stage. Think about moths.

This won't give you creatures that can live forever, but it wouldn't be a stretch to give the creatures a 10 to 20 year living time in you magical cave.

Organic detritus can be carried down from the surface in streams of water or in water trickling down though small fissures in the rock. Your insects could filter-feed or there could be smaller critters that filter-feed and are predated by your insects.

You need an energy source / food supply. Fungus grows fine and many insects farm fungus as a food source.

The insects could recycle their dead and waste to feed the fungus but also supplement the fertilizer with wandering animals killed by the aura.

Note that the availability of food is not the limiting factor for insects size, but rather oxygen concentration. Since insects have no lungs, they can not deliver oxygen effectively to internal organs. See for example http://rspb.royalsocietypublishing.org/content/early/2010/03/04/rspb.2010.0001

Whoever made the city planned long term, building critical systems as nearly closed loops able to wind down for eons. The bugs found a food system still working. The pest control protections target small things, so the bugs evolved to be large enough to be mistaken for livestock or pets.

You already have an important aura, let the bugs feed off it. Taking radiation as a proxy, there is real mold that grows inside the reactors at Chernobyl, the radiation would kill us quickly but this stuff feeds on gamma rays.

The bugs use their own magic to survive, maybe luring victims or transmuting dirt or conjuring meals.

Once you realize that the "underground ruins" are actually the remains of the city's sewers, septic tanks and sewage waste processing plants, the question of "what's on the menu?" becomes a little less appetizing.

Never heard that smell described as "magical" before, but to each their own. One man's %&#!@ is another bug's smorgasbord.

There you have it. No more is needed.

The magical aura gives them life energy. Perhaps combine this with @Pieter B's answer for a really good solution.

Your giant, secluded, underground cave-dwelling insects are lithovores. They can consume rock, ore, soils and metals in quantity and thrive in large numbers.

They could be scavengers living off of the animals that wander into the caves and die from the magical aura.
Of course the cave would then need to be near a sufficiently large source of curious-and-tasty animals that will consistently keep wandering in. It would, however, be a good way to justify the creatures being aggressive (if that's what you're going for), since they're used to eating the things that wander in.

Life takes energy from some source and generally changes it into a higher-energy system, kind of a localized anti-entropy. They need some form of energy to process.

Energy can come in any form, life will probably figure out some way to deal with it.

If you had a lot of magnesium and oxygen it could probably burn the magnesium internally, there are thousands/millions of chemical combinations that could produce the needed energy.

If you have a temperature differential it could be harnessed. In our world this exists in the deepest parts of our ocean near volcanic rifts.

I suppose if you provided an electric charge for long enough some form of life would evolve on top of it.

Problem is, ALL forms of energy will eventually run down. We're lucky that our energy comes from a source that has been/will be viable for a duration that's nearly incomprehensible, but any form that is stored "Underground" will be much more limited (Unless, I suppose, it's some kind of gamma radiation based form of life.)

Not the answer you're looking for? Browse other questions tagged reality-check biology insectoid insects or ask your own question.

1
How would an organism live without blood?
5
Can a large animal get nutrition from minerals?
3
What Foods are Possible for an Underground Society
2
Anaerobic Fungal or Plant life

7
Creating a realistic Fae underworld
9
Behemoth, the Sessile Mammal
10
What would the eyes of a cave-dwelling race be like?
7
How would a cave civilisation survive underground?
8
Can fiber optic cables be used to pipe sunlight into an underground bunker for growing plants?
0
Feasibility of the Spore Mantis
3
What can I expect these humanoids to look like?
1
Exclusively underground creature experiencing sun-light for the first-time
9
Where would the best cuts of meat be on a giant insect?
4
Oasis ecosytem contained within the corpse of a long dead megafauna?