Would a river running through a large salt deposit turn red?

I’ve heard that bodies of water boasting high salinities tend to turn red due to seasonal algae blooms. I have a river in a fantasy setting I’m working on that’s blood red year-round, and I want to kind of subtly hint to the readers that this is the actual reason the river is red, rather than the local juju and other superstitions (because medieval folk probably wouldn’t understand the idea of microscopic organisms turning the water into blood).

However I’m not too familiar with the details of these blooms or what environmental factors can permanently cause a river to become highly saturated with salt. My immediate, most brute-force caveman idea was to have the waterfall that feeds into this river cut through what amounts to a hill or a small mountain of salt, giving it the nickname “Leech’s Knee” (with the angular waterfall being a bent knee and the red water below being the blood flowing from it after one has plucked or salted a leech). I don’t know if this would actually work however, or if there is a more elegant solution.

Can anyone lend me a hand?

Reasons for red colouration could be due to:

Erosion Massive amounts of soil being deposited into a body of water through erosion can change its colour to red if the soil is this hue. But, for this to occur, large amounts of rain are usually necessary.

Increased salinity or decreased oxygen A salt-loving algae called Dunaliella Salina, which produces a red pigment that absorbs and uses the energy of the sun in order to create more energy, can cause a red tide. This can happen if the salt level of a lake increases, killing the creatures such as brine shrimps that normally feed off of the algae. Lack of oxygen can have a similar effect.

Pollution Discharge of industrial pollutants such as dyes and chemicals can also cause dramatic colour changes.

If you want to use salt as the mechanism you just need a salt lake high up in the mountains. Perhaps the climate has changed and what was a dry salt lake has become a real salt lake that now overflows and contaminates rivers downstream causing them to turn red.

Erosion would be easy – just have some red soil upstream.

Deoxygenation is a little harder but if large amounts of rotting material are regularly washed into the river and get stuck at a choke point marsh or lake, bacteria in the water would rapidly consume all of the oxygen in the water leaving it deoxygenated and dead. If some organic material flowed with the stream and there were no waterfalls or turbulence, this state could continue for many miles downstream.

I think it happens from time to time in the Yangtze River: 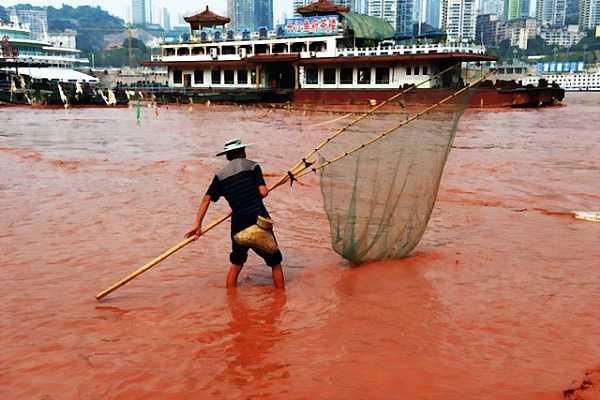 Can you change the output of your star so that anthocyanins are more useful than chlorophyll? This would be an interesting way to get to more red algae.

If you built the world off of anthocyanin, instead of chlorophyll, you would have a lot of purple plants (you can throw in a few green ones too.) The algae could be predominantly red.

The single change that would cause this, then, was the original endosymbiotic event that allowed photosynthetic eukaryotes to evolve.

Then a red river is a simple matter of nutrient (N, P, K) run off, just as our rivers with lots of runoff are usually green and slimy.

p.s. as I read your post I kept thinking about red snow I have seen. In case it is useful, I included the link.

Around our coastal areas we have this problem often.

The meteorological institute keeps a close watch for this. But it's seasonal, not all the time.

It has been know to happen in rivers as well but the causes were different.

In some cases they were due to three factors coming together and wouldn't have happened otherwise. It started by agricultural fields along the river banks being over-fertilized, this raised the concentration of nitrogen, proteins and other chemicals in the water, then as temperatures increased the algae appeared.

Maybe your farmers are using too much manure?

There's also the option of a volcano being nearby. The volcano would continously exude to the outside thermal waters (above or underground) that would carry along various ionic compounds (salts) of sulfur and iron, which turn the water to a color similar to iron oxide.

Not the answer you're looking for? Browse other questions tagged reality-check geography geology chemistry or ask your own question.

2
How would humans eradicate an organism that can actively spread through Earth's atmosphere?
8
Would a salt flat be near a river?
12
Would it be possible for a large inland area to have a groundwater system with cenotes, rather than rivers?
2
If I was to tunnel straight through a mountain, what kind of rock would I find?
7
A River Runs Through It - The effects of a time dilation field on a body of running water
3
Would an deep sea lava river be feasible?
14
Could the Missouri River be running while Lake Michigan was frozen several meters deep?
2
Need a North American location with a large city and whitewater river for post-apocalyptic fiction