Can a Ringworld have a 'moon'?

The idea is to have a number of artificial, spherical satellite to have sort of a "spiral" orbit around a Ringworld, such that the inhabitants of each of a number of ring sections see a moon in the sky once every year or two. Is that theoretically possible for a sufficiently advanced civilization?

Edit: By 'Ringworld' I mean a Niven-Ring, I should've clarified that sooner and I will try to do better next time. Thank you all for your answers! I think I have a better idea of what I want to do now.

There are a few options. I'll assume a Niven-type ringworld with a radius of 1AU (i.e. the surface is the same distance from the sun as the Earth's surface).

If a ring this size were simply in orbit, rotating about the sun once per year, then its occupants wouldn't experience weight. So it actually rotates 41.6 times faster (once every 8.8 days), creating a centripetal force of 1g.

The following ignores the mass of the ring itself (it's made of carbon fiber or something), but at least the first two scenarios could probably be adjusted to account for that.

The "moon" (actually a planet) orbits the sun in a highly eccentric anecliptic orbit, meaning that its orbital plane M is at 90 degrees or so to the ringworld's orbital plane R (figure A). If you fix your camera to a point on the ringworld, the moon follows a helical path around the ring, as requested (figure B). However, this isn't really what you want, because most of the time it would be too far away to see, and when you could see it, it would be rapidly falling toward the horizon and then rapidly rising out of view on the other side of the ring.

You'd never see it pass right overhead. But you could time the orbits so that people in a given town only see it once every 5 or 10 or 50 years.

Orbits like this aren't seen much in nature, for a few reasons, but it's nothing that a ringworld engineer couldn't easily fix.

You have two (or more) moons orbiting each other in a "rosette" (Niven actually mentions this in Ringworld although his terminology is a bit wrong). The center of this system orbits the sun in a circular orbit of the exact size of the ringworld itself, so it looks as if the moons are orbiting the ring (figure C). The center point of the rosette goes round the sun once per year, while a point on the ring goes round the sun 42 times per year, so again, relative to the ring, the moons' path describes a helix (figure D). You will pass under the moons once every 9 days.

This one is a bit harder to visualize. First, let's forget for a moment that the ring is a centrifuge, and assume it's simply floating in orbit round the sun. If you have a single moon orbiting the sun in approximately the same orbit (figure E), then it's in geosynchronous (halosynchronous?) orbit and will appear stationary in the ring's sky.

Now, make that moon's orbit slightly eccentric, so that the apogee (strictly, the "aphelion") is outside the ring, while the perigee ("perihelion") is inside the ring (figure F). It's still sort of stationary, but it's bobbing above and below the ring – if you plot it out, its path looks like this: 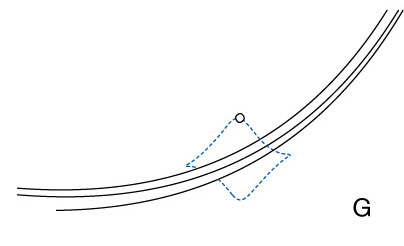 It's not exactly a circle, but it does rise on one side of the ring and set on the other.

Now if you recall that the ring is spinning at an extra 40.6 revolutions per year, that shape becomes a distorted helix – I won't try to draw it, but it's the same type of situation as figures C and D.

If it's important to have the moon pass overhead, then you want scenario 2 or 3; if it's more important to have the moon appear at long intervals, you want scenario 1. I don't think there's a way to have both using orbital mechanics, given that the moon needs to get close enough to actually be visible. If none of these options work, then perhaps instead of a real moon you could have a giant airship, or some sort of moon-shaped machine attached to the ring.

If you're determined to have something in the sky you could make a fake moon, though. Build another ring at some distance inside the habitation ring. Your "moon" is merely a picture being carried on that ring. This avoids all the problems mentioned above. Why? There is some cultural importance to a moon that's enough to warrant the cost of making a fake one.

You'll find some hard math here, but the short answer is: if you're moon is unpowered, you cannot have a spiral orbit. That's simply not the way the universe works. As mentioned by @Slarty, you could have a very long elliptical orbit, but there's a limit to how long the ellipsis can be before the moon walks away from lack of gravitational pull.

If you love physics & math (or simply want to learn something cool despite the headache it will give you), read Wiki's page on orbital mechanics. The basic truth is you can't get what you're looking for ... kinda. Let's examine some goods and bads.

Another possibility is to put the moon's orbit on a high declination, such as the orbit of Pluto or the orbit of some asteroids around the Sun. This won't give you years, but it would make the moon appear aperiodically from the perspective of the planet's surface.

Its orbit must be outside/inside (not within) the rings

A gotcha you need to worry about is that the moon's orbit must not be within the rings, otherwise the rings will slowly pulverize the moon. An elliptical orbit with a high declination would allow it to move inside the orbit of the rings, but without the declination, it would need to be completely outside the rings (meaning from the right place on the planet you would always see a line across the moon as the rings cast a shadow).

But, it's artificial, so it can be what you want

But, everything I've been telling you is from the point of view of using gravity to keep everything in order. If you give the moon power then you can have it do what you want. That's really the question you need to answer: does my moon have the ability to apply force to correct/control its orbit? If yes, then it does what you want when you want. If no, then it doesn't matter if it's artificial or not, it must obey the laws of celestial mechanics (with a little literary license thrown in to keep astronomers on their toes).

A spiral orbit would not be ideal for a long term satellite as it would eventually crash into the planet or fly off into space. However an eccentric elliptical orbit would allow a satellite to make relatively close flybys of the planet from time to time and depending on the exact orbital period it could easily pass over a different “section” of the planet each time. Here are some example eccentric orbits. The satellite would be moving fastest at its closest approach to the planet in each case. 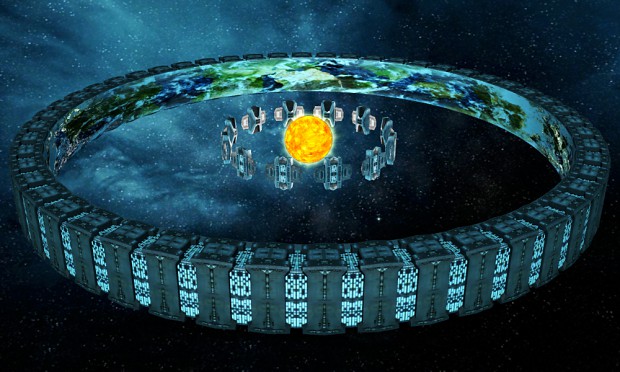 I suspect the stable orbit of a moon around the ring world would follow a figure of eight pattern or a linear motion perpendicular to the axis of the ring world in a pendulum motion like this: 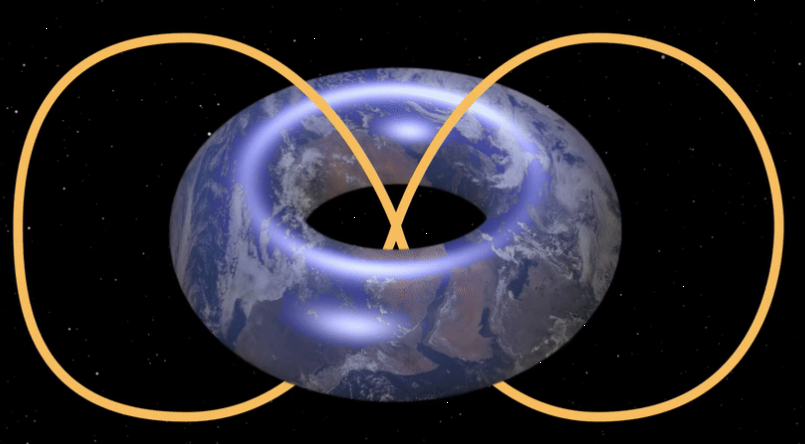 See this link for the alternative:two possible orbits Although this would obviously not be possible with a central star.

However I think the geometry that the OP was asking for would be best described as a spiral ring similar to this (the closest that I could find being the electrical equivalent): 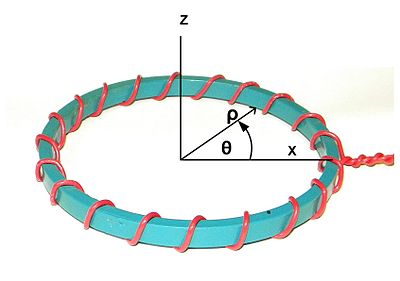 But the calculations are atypical and a little complex. So I stand to be corrected if anyone knows better. I should also point out that any ring world orbits would be highly unstable if any other large astronomical objects were in the vicinity (with catastrophic results).

You may be able to have an orbiting body that is moon-esque in its relationship to a Niven Ring but you don't want to. Ringworlds are unstable in their "orbit" of their primary, and the orbits of Moons are not stable over geological time. As such any object that shares a star system with a Niven Ringworld will either get too close and destabilise the structure or actually hit the ring and make a hole, holes are bad. In Ringworld the system is empty of everything except a few Oort Cloud distance objects left behind to "top-up" the biosphere at a later date, also it uses the star as an anti-impact defense particle weapon system because that's how much of a problem the ring getting hit is.

You could make a second ring structure "orbiting" the big ring(the truth would be it's orbiting the sun) structure which would hold a moon like artificial body and for good measure make it simulate night time on the ringworld segment it's on at that particular moment. Not having a night cycle could prove bad for the psychological aspect of the inhabitants.

Not the answer you're looking for? Browse other questions tagged moons dyson-ring .

32
Can we 'beam' energy from the moon?
7
Can my habitable planet have a habitable moon?
10
Giving a Planet Sunburn
12
Horseshoe Orbits
9
Feasibility and consequences: the cosmic dance of twins habitable moons
7
What is the natural shape of the atmosphere on a Niven ringworld?
13
How can a moon have an ever-changing face?
6
What would the effects be on a planet whose moon orbits at a speed just faster than a geosynchronous orbit, so there are more months than days?