What non-arachnid animal would be capable of spinning a web?

Spiders produce silk, a protein fibre able to construct webs and dens. But is there an existing animal (preferably a vertebrate) that would be able to evolve a similar ability of producing a silk-like fibre?

The edible-nest swiftlet fits the bill. It is a vertebrate. It has saliva which performs a structural function without added twigs or vegetable matter. 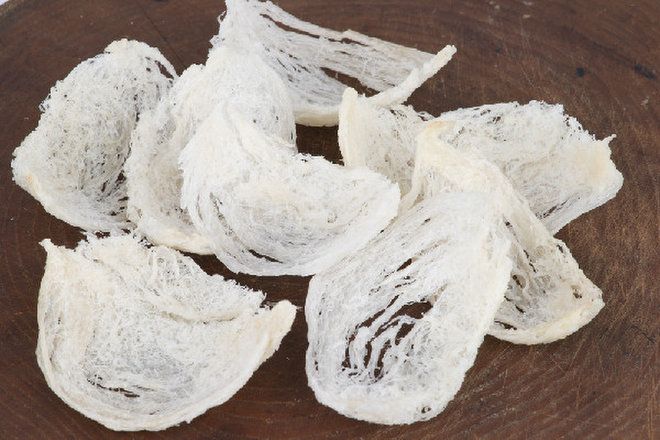 Probably you could make delicious soup out of the web too!

mussels produce external protein fibers, eventually this could evolve into a web. 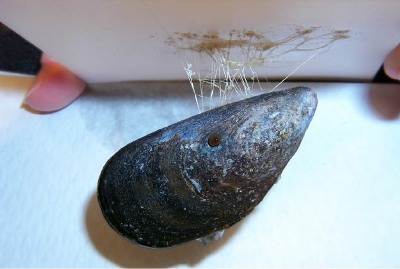 Silkworms produce silk. Some caterpillars weave webs to protect their cocoons. Other moth and butterfly larvae, like bagworms, could also create similar structures.

These goats did not evolve, they were genetically modified. They have spider DNA and produce spider silk in their milk.

Maybe with some more tweaking you could get them to produce pure silk instead of the milk silk.

Evolution modifies existing traits as new uses emerge. Spiders use their silk to catch/immobilize prey, drift through the air, protect their eggs, and build shelters. Any of these uses could have come first, but the first one gave an evolutionary advantage.

Skunks spray in self-defense, but a new protein could make skunk spray an adhesive, which could eventually lead to skunk webs. Birds use saliva to glue together nests (like Will says), and that could turn into cobwebby, entrapping structures. Any tunneling animal, like a prairie dog, could start extending its structures aboveground, or up into trees.. given where the spinnerets are on spiders, maybe they started out with sticky excrement?

Original question: "is there an animal that could evolve to have webs?" Short answer: given evolutionary timescales, anything is possible. Start with a use case and build out.

The default answer I'm seeing a lot of is this:

There's certainly a point here, but I'd like to add a caveat. It has to do with scale. That is, the extrusion of silk depends heavily on the processing of the raw pre-silk fluid through spinnerets (basically molecular-level protein alignment by squeezing through narrow opening) and then braiding or weaving separate threads together. This is a very micro-scale operation, and it's unusual for a large animal to have conscious control over such a small, precise operation. Spiders are small enough that their "awareness" for lack of a better term is on that level.

I may not be explaining this well, but the short-short is that (say) a human would find himself too fumble-fingered (and his fingers too large) to handle such tiny filaments.

You could posit maybe a chain of organs where the small-scale work is done autonomously and then hands off to a larger manipulator (maybe several steps) until you get to a scale appropriate to the creature, but ... it seems a little precarious.

Note: I'm making a huge assumption here about the level of fine manipulator control being linked to creature size. I think it bears out, but feel free to challenge!

It's all about genes. Evolution has a nasty habit of 'stealing' successful genes from some organisms and transferring them to others. Basically, anything one organism can do, so can another, if the genes transfer over. That is what Genetically Modified Organisms is all about.

Give the organism the gene to make the correct protein that will make silk (or a silk-like substance), and you have your answer.

Even humans are getting in on the act - modifying bacteria with the gene to make spider web strands, as a way to make stronger materials.

Not the answer you're looking for? Browse other questions tagged biology evolution science-in-society or ask your own question.

42
Would armour made of spider silk work?
8
How can a vertebrate animal evolve for extended flight before living on land?
37
Anatomically correct Arachne
3
How and why would an organism evolve BioSteel?
7
What would be the usefulness of both arms and fins on a sea dwelling, amphibious organism?
4
What changes to the livestock industry would slowly evolve the animals to become a threat to humanity?
8
Could a non sentient land animal evolve an innate knowledge for making boats?
4
The Itsy-Bitsy Insect Has Made a Web. How Differently Would it Look From Spider Web?
2
Mammal evolving spider-silk
6
What is the most effective location for spinnerets in a vertebrate?