How would you represent an encounter with a being beyond our understanding? [closed]

In my fantasy world, there are four supreme beings that even our gods can't understand, in fact they believe they were created by those beings. Imagine that a human character would face one of those beings. How do you think the being would act? What would happen? (that does not result in the character instant death).

The most impressive situation I saw about this kind of thing was on the Japanese manga Gantz Chapter 369 and 370 where the characters meet an alien being whose intelligence/existence was beyond human comprehension http://www.mangareader.net/gantz/369 (You may read here, but 18+ only)

Have you ever seen this kind of situation in any book, movie, or anywhere else? If you did, give me a recommendation.

TLDR: What would it be like meeting a supreme being beyond human understanding?

Edit: Also if you can, give me ideas of what interesting things that could happen when the character meet such supreme being.

Well, if they are beyond our understanding, how would we even recognize that we met them? Beyond that, if they are that impressive, would they even be able to notice us? We would be less than intestinal bacteria to them, maybe viruses to those bacteria.

I would say unless the being somehow deigned to give us some aspect of itself sufficiently diminished to be with in our understanding, we wouldn't even know we had the encounter. Anything that happens would be put down to some kind of strange natural phenomenon.

It depends on the Point of View of your writing.

If you are writing in first person, with your readers perspective of your world limited by their senses, thoughts and understanding, then you would have to render any incomprehensible being as that character would perceive it. In this case, your character's emotional response to the encounter may overwhelm their ability to describe it clearly. Their sanity might even fail them, leaving the reader on a precarious perch, with their narrator slowly going insane. Check out the writings of H.P. Lovecraft and other authors of the Cthulhu mythos for more on this.

If your readers have a little distance, perhaps a limited third person point of view, you can be more "show don't tell" about it, describing the physical manifestation and its actions; then describing your character's reaction. Here you don't have to say that no common ground exists between the human and the divine, you just have to show it. Again, your character may not handle the encounter with impunity, she may become enlightened, inspired, or damaged. I seem to remember that Piers Anthony's early Xanth novels handled their divine being in this way.

Omnipotent third person is where the task becomes more challenging. Here your readers have become used to you, the god-like narrator, understanding everything and explaining it to them, as the characters perform in ignorance below. Your readers are used to a privileged vantage point where they not only get to see all that happens but also get to know why it happens. And now you have to explain the unexplainable to them. ...yet another reason to avoid this abysmal POV option.

I like the view of the supreme being that we are a part of but incapable of understanding. The parallel that I like drawing for this is the relationship between us and our cells. Let's say a cell in your body (let's use a red blood cell as an example) suddenly became conscious through whatever means.

I can go on with questions along these lines...to a single cell in our body that had thought, how much can it really be aware of the far greater purpose of it's body? And not to say that far greater purpose of the body is actually anything greater other than scope...for the length of that cells existence, the body it brings to life could be part of a firefighter saving anothers life as readily as it could be a part of a criminal viciously taking anothers life...or potentially more likely, the blood cell is a part of a human in front of a mildly entertaining tv program as he wastes it's life away. The greater scope and understanding of these supreme beings does not imply they are doing anything more important/valuable than we are.

The reverse is true too...how aware are you of the internal struggles of a blood cell in your being? Do you really care if you cut your finger, lick the wound, and unwittingly sentence thousands of them to die in the acid vat that is your stomach? Are you aware of how your cell would experience the world as a series of chemical inputs as it communicates with other cells?

So I would answer your question in one of us meeting a supreme being as a cell being put under a microscope and being examine by us...Perhaps a little awe in the supreme being realizing it can actually see something so little and meaningless to itself, and probably very little potential of the person even being aware of it being looked at. Interaction is near impossible as the senses the two beings are barely recognizable to each other...but maybe a little understanding that neither could exist without the other.

The holographic displays were flickering, while the black outside viewing ports were either obliterated or dimmed to near zero, as the onboard AIs were routing all available power to the shielding systems. Yet the oncoming onslaught was such that Nabresh could see that rifts were starting to ...Discontinuity...

Nabresh blinked. "Am I dead?" he wondered briefly. Still in his hundred-g suit, most of his sensory implants reported back, albeit with mostly nonsensical values such as out-of-bounds readings from the temperature, pressure and neutrino monitors.

Using what he thought were his regular eyes, Nabresh could see the dark outlines of a giant hall. A narrow central corridor was lined with parallel stacks of book-cases. And he could sense presences, busily shifting through the corridors, although his eyes could not detect anyone.

Just as Nabresh started to wonder if these ghosts were simply the delayed result of the magnetic overpressure he'd been subjected to on his ship in what seemed like only seconds ago, there was a sudden change in the presences. They were suddenly hurried, and started to become more distant, as if they were all fleeing in the same direction. Nabresh felt the strong urge to do the same, but hesitated.

Curiosity got the better of him, and as he waited, energetic flashes of light invaded the hall much like the blue-red flashes of a space-station ambulance ship, except these were blue-gold. The hall's geometry had shifted imperceptibly, with the central corridor now a vast opening. Something was coming.

Nabresh now got an overwhelming sense of dread, and knew that he had to flee, but was somehow frozen in place. The flashes increased in intensity rapidly, and became almost painful. Then, suddenly, he saw it. It was near.

In appearance it seemed like a small golden globe, about the size of a grapefruit or a small basketball. Against it were pressed with unimaginable pressures two twisting dark-blue hemispheres, each rotating in a different direction. 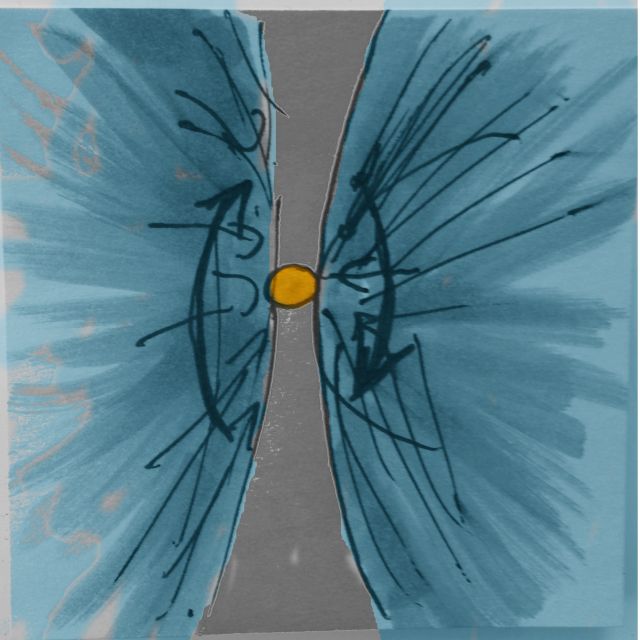 For a brief moment, Nabresh knew he had encountered an alien god. As it neared, the sense of horror grew without limit, and Nabresh's last tought was "I should have fled with the others" as the sheer uncaring passing presence of the entity ripped his being to shreds and erased him, and whatever platonic-shanonic construct 28th century physicists chose to represent souls, out of the very fabric of spacetime.

TL;DR-WTHDYGTTTWTTS - (Where the heck do you get the time to write these things, seriously?) It's big. It exists in a place so strange your mind reduces it to a more familiar sight to protect itself. It's so alien it's painful to look at. It will crush you and destroy your soul, probably without even noticing.

An encounter with a God like being we will never comprehend or understand would be like seeing an unexplainable flash of light, or feeling a cold chill on a warm afternoon. We can only hope they recognise our vulnerabilitys and let us exist. I suspect there attention on us will be short lived and only our impression of them will remain for very long. On the other hand it is god like and has all the power so it will determine how much we understand. For as long as we believed!

Consider how we interact with ants.

One way we interact with ants is through surrogates. Watch a child investigating ants. He mostly doesn't poke them directly. Instead, he pokes them with a blade of grass, perhaps with a dead ant on the end, trying to get the two ants to "talk". He changes the ant's environment by removing its trail, and sometimes by moving it away from its familiar environment to a jar or tupperware container.

In visual storytelling, this is usually represented by a blank white void or white room, as you see in 2001, the Matrix, etc. Don't do that.

But it's important to remember that despite being ineffable to us, we may be equally inscrutable to the God - it may not even know we exist, nor, on knowing, might it have the least clue what our thoughts or beliefs are.

But if it did want to communicate, it would communicate on our level, by changing our environment, or poking us with sticks. So, an Avatar or angel - a collection of whatever crap the god found around, crafted into some form of approximation for us. It might or might not be able to communicate with us. Most likely, if we were inscrutable to the God, it'd just make the avatar do stuff and see how we reacted. Eventually, a God interested enough to put the work into it, would be able to understand us, especially if we made an effort to communicate back, just as we can understand the basics of animal communication (back off! I'm hungry! I'm scared! I'm wounded! etc).

Not the answer you're looking for? Browse other questions tagged humans aliens or ask your own question.

48
If accelerated natural healing were to occur, what would happen to the human body?
6
How can an alien meet the president of the USA without attracting attention?
15
Psychological impact of being immortal
2
Realistic reason to nuke an almighty entity without minding the collateral damages
8
Mathematics of monsters
4
Could a human grow up larger by manipulating their endocrine system?
9
How long would it take to eliminate the lovecraft mythos from the human consciousness?
17
How devastating is a weapon that can internally and rapidly cool down a section of a human body?