Can a dual planet have an orbit around the Sun similar to Earth's?

OK, let's imagine that the thing everyone thought was a moon was actually a twin planet sharing a barycentre with BlinketyBlink.

They are currently not tidally locked, the twin is slightly smaller, with a similar basic composition and a Venus-like atmosphere.

They are far apart enough to not cause deadly disturbances on BlinketyBlink's geophysical conditions (weather, plate tectonics, volcanism, tidal waves...)

Everything is just perfect and life goes on normally on BlinketyBlink.

My question is : could the twins have an Earth-like orbit around their Sun? That's to say about 365 days, slightly elliptic and that would maintain regular weather patterns (summer to winter seasonal periods) on BlinketyBlink?

My imagination gives me this 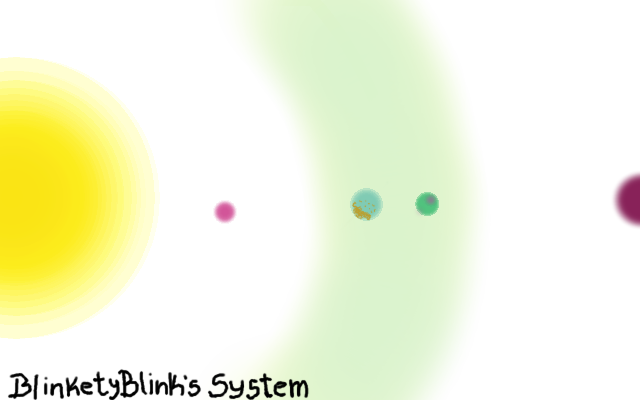 Short answer is"yes", living on Blinketey blink would be very much like living on earth with two key differences.

"Moon light" would be several times brighter. Our moon is actually about the same reflective index as coal, but the atmosphere of the second member of the binary will be much more reflective, and the apparent size will be quite a lot bigger.

Tides will also be stronger.

In the situation you describe the center of mass of the system will orbit around the central star following the usual ellipse.

Both planets will "dance" around their center of mass, with the result that they will get more close or more far from the star with this dance.

Since you state they are far enough to not disturb each other too much, this means the change in distance from the star can be significant.

It's all a matter of the size of the sun and the distance of the orbit from the sun. How big do you want your planet to be?

Our seasons are dependent on the tilt of the earth's spin in relation to the orbit around the sun. Each planet could have a different tilt. This is completely variable. The axis of spin of one planet could even be on the plane of rotation around the sun.

It is also variable as to how the planets orbit each other. Perpendicular to the sun-planet line? On the same plane as the orbit around the sun? Or somewhere in between. If on the same plane, the eclipses would be spectacular, and on every orbit of one planet around the other. If it was completely perpendicular, there would never be an eclipse.

Actually, thinking about it some more, I'm not so sure that a two-body co-orbit that's perpendicular to the solar orbit would be a stable situation. At the two points in their solar orbit where A and B are equidistant from their sun the sun would be pulling on both of them equally (or almost, depending on their size differential) but at the other two points, 90° away, one would be closest to the sun while the other would be furthest away. It seems to me that this would introduce variability into their orbits, making this arrangement unstable. The reason this doesn't happen with the Earth-Moon system is because the Moon's orbit is (pretty much) aligned with the Earth's orbit. But, then again, I'm not an expert. Would anyone out there with an astrophysics degree care to chime in?

Not the answer you're looking for? Browse other questions tagged planets astronomy weather geophysics .

40
Habitable moon of a gas giant: working out the sizes and distances
10
How would this tidally locked planet be affected by its moon and would the moon have a deaccelerated orbit?
0
How big could a moon be before its orbit became too unstable or tidally locked to its planet
8
Can early astronomers determine the gravity of their planet's "moon" without ever going there?
2
What if a moon orbits far away and extremely fast?
2
What kind of ecosystem would naturally develop on a relatively large outer moon of a gas giant?
1
Two celestial bodies tidal locked - not with the sun
3
Given the parameters of this planetary system, what would the practical effects be on its surface?