How big could a moon be before its orbit became too unstable or tidally locked to a planet about 1.6 times larger than Earth.

Planet BlinketyBlink is on a similar orbit (to that of earth's) around its sun, its landmass is 12% to 80% water and 8% ice.

Alternatively, if the Moon is about 27% the size of Earth, how large would it have to be before it became unstable or tidally locked?

I need a large moon that is not tidally locked (yet).

How large could it be?

My world is younger than Earth about it's age when Pangea was around, and its moon as well I guess, it doesn't really matter. I just need my planet's atmosphere and weather conditions to be similar to that of Earth's right now, but the moon to not be tidally locked and be larger than ours.

A planet and its moon both rotate about their combined centre of gravity or barycentre. In the case of the Earth Moon system the barycentre is quite close to the Earth as the Earth is so much more massive than the Moon. But if the mass of the Moon were to increase the barycentre would migrate away from the Earth towards the Moon. 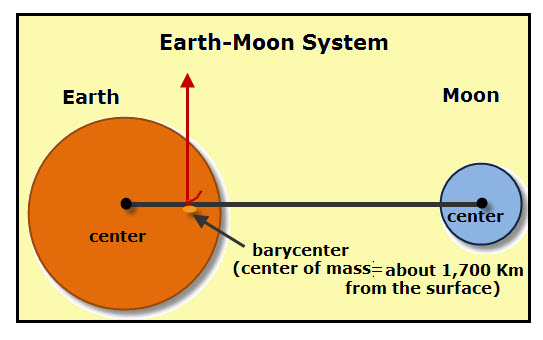 If the Moon were the same mass as the Earth the barycentre would fall exactly between the Earth and the Moon. In this situation the system would better be described as a binary planet. If our Moon were more massive than the Earth, our Moon would be classified as a planet and the Earth would be classified as a moon. So to answer your question just under 1.6 times the mass of the earth (assuming mass rather than size) any bigger than that and it would no longer be considered to be the moon, it would be the planet instead.

If a planet were to gravitationally capture a moon which already had a significant spin, tidal forces could take millions or billions of years to slow it down, depending on the detailed circumstances. Moons in more distant orbits would take longer to become tidally locked.

Tidal braking will take always place; tidal locking will be a matter of time. As another answer said, you could have a moon that is not tidally locked if it was recently captured by the planet (meaning a few tens of millions of years ago, probably). Since a rogue object can come from anywhere, recently captured objects tend to have remarkable orbits, often very excentric and rather tilted with respect to the plane of the planet's equator. In time these things tend to become more "normal"; tidal braking in particular tends to circularize orbits and to shift them towards the equatorial plane of the planet.

One thing you need to consider is that tidal braking is produced by dissipation of rotational energy, which is most intense at the beginning of the process. Imagine a car rolling downhill with the driver always applying the brakes. In the case of your captured moon, this energy that is being dissipated as the moon brakes will probably melt it (as is theorized to have happened to Triton after being captured by Neptune), or at least turn it into a very active place (as is happening to Io).

A large, close-in satellite will not necessarily make your planet a worse place to live, but it will certainly have important effects. Tides will be stronger, and of course your planet will also suffer from tidal heating, possibly becoming more active geologically, since both bodies (planet and satellite) will be working toward tidally locking the other.

7
Can a dual planet have an orbit around the Sun similar to Earth's?
3
What would be the effects of a large moon?

13
What factors go into whether a moon or planet is tidally locked?
11
Open sea navigation on a tidally locked moon
2
What would be the effects of an existing planet becoming tidally locked?
10
How would this tidally locked planet be affected by its moon and would the moon have a deaccelerated orbit?
7
Can a dual planet have an orbit around the Sun similar to Earth's?
4
Tidally Locked Planet with no Oceans
2
Would Moons of a gas giant appear to phase when looking at them from another, tidally-locked Moon?
0
In this binary, how far would the secondary planet orbit the primary planet and still have its own day-night spin?