What kind of gas would allow a rock to float? And what kind of rock would it be?

Scenario + question: So for the purposes of this question lets so that there is a canyon much like the grand canyon but about 50 miles deeper, so the bottom is always in shadow and it has no observable bottom (but there is one). What kind of gas would it need to be filled with for floating islands to be possible?

Requirement: This is in a world that has natural magic (as in occurs naturally and by itself), however I would like to make it at least kind of scientific. The gas might be so dense that it appears on on the bottom of the canyon in a liquid state, which is OK. The rock may also have another gas trapped inside (e.g. helium or oxygen), however it needs to be solid enough for a building to exist on the top (more like huts because of the time period).

Therefore, your gas would need to be more dense than the rocks. At that density, whether a gas or not, you could walk on it (and, to answer your side question, boats would work just fine... assuming they could move through something more dense than rocks....).

It's possible to address the question as rocks filled with an offsetting gas (e.g., helium), but it would have to be very little rock to a lot of helium due to that "their own weight and a little more" statement I made about hot air balloons. Look at how much hot air is required to lift a nylon bag. Now pretend that bag was as dense as rock.

Therefore, let's assume your planet has a type of rock that forms thin, difficult-to-break shells as they rise through magma, trapping gas inside. In real life, that gas is never helium, but let's stretch reality for a moment and say that it is. Your floating islands would be fairly large, paper thin (though difficult to break) and almost entirely made of this material. Let's say it shimmers like glass. It would look cool. But this is as close to science as you can get (and there's not much science here).

Gases are tipically 3 order of magnitude less dens than solids, so there is no way you can have a massive rock float in a gas. You can still have a hollow shaped rock float, as long as the average density is lower than the gas. Basically a rocky ballon.

Sulfur Hexafluoride is a pretty dense gas, so you can go for it.

Edit I have thought of a better way, but will keep my other suggestion below for amusement.

If we abandon equilibrium conditions it makes things hugely easier, if the system is not at equilibrium there would be far more scope. So if your canyon has a high continuous and steady gas flow flowing out of it upwards and it is slightly "v" shaped in cross section then rocks might float in the same way that humans can float in an air stream like this: 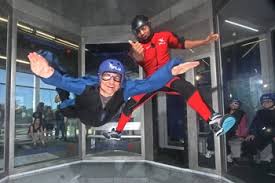 Original post It depends on how bizarre you are prepared to let your environment be. If you were hoping for it to be a human habitable world even approximately, then I would say not a chance. It’s a tough call in any environment, even excluding human habitability. But let’s see what’s possible. My answer to this recent question might be of interest and I guess if you’re using magic then you won’t mind playing a bit fast and loose with the physical parameters of the world?

At around 25 degrees C Xenon gas has a density of around 3g/cc at 203 MPa (around 2000 atmospheres pressure) seep84. Although this must be close to its condensation point at this temperature and pressure as the liquid density is only 3.1c/cc. That should be enough for your floating rocks as a solid rock is not that compressible and you could pick some nice light rocks from this list.

But this world would be beyond weird. Although technically a gas it will be so dense it that walking though it would probably feel more like swimming in treacle or mercury than walking.

A phase diagram for xenon would have been useful, but I couldn't find one.

Perhaps an easier answer would be to suppose some form of magnetic levitation along the lines used in the film Avatar...

Leaving out a few technical impossibilities, such as gasses not separating, and that a canyon (or any hole, like a crater) much deeper than 10 km/6 miles is unstable for the same reason that mountains higher than that are unstable, consider aerogels. Graphene aerogel is reportedly lighter than air: https://www.extremetech.com/extreme/153063-graphene-aerogel-is-seven-times-lighter-than-air-can-balance-on-a-blade-of-grass

The problem is that (at least as I understand it), the graphene aerogel is porous, so it's permeated with air and so doesn't float. But with some fancy bioengineering, say, you could manage to grow closed-cell aerogels containing hydrogen, perhaps even with lower than ambient pressure. The aerogel "tree" would even have a "bark" surface, so you could walk around on it.

16
Naturally-ocurring Airborne Floating Islands - is it possible?
4
How to create a floating rock
2
How to get high atmospheric pressure with 1g

45
Papers, please: Can characters trapped in our reality acquire enough paperwork to be legal?
2
If I was to tunnel straight through a mountain, what kind of rock would I find?
7
Would the rock formations in the giant's causeway scale?
2
Fantastic gas, part 2: what would be the source of a subterranean gas that's not organic in origin?
8
Effects and feasability of a modern-day Olympus and Hephestus
2
What kind of rock could I use in my mountains?
2
What kind of weathering on which kind of stones would produce fantasy style rock formations?