Do orc's tusks have a place in modern society? [closed]

I am picturing the orcs coexist with the humans amicably in the present day society, is there a need for the juvenile orcs to remove their tusks at puberty in order to mingle with high social class human? Note that they have long abandoned their predator instinct and have evolved over the millennium to share similar higher brain functionality as us, is this scenario too naive? or you cannot erase their savage personality by giving the orcs a superior brain? I like the orcs to be highly educated and possibly having inter species marriage with humans. An orc with tusks always look frightening especially if they look at you in the eyes and grins... 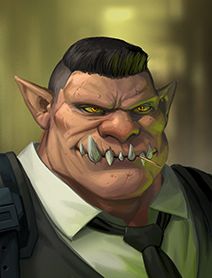 It depends on the society

An Orc's tusks are a natural part of them, provided by their genetic makeup. Removing the tusks would be the equivalent of someone changing their skin colour & culture to try and fit in.

If you look at it from the perspective of racism in the current world, you would find areas that are more or less accepting. In places of less acceptance, an Orc might do as you've suggested. But some Orcs would also be proud of who they are, and refuse to change just to "fit in".

I think something so ubiquitous to a species will not have much impact in a modern society. I suspect that larger tusks would be seen as a desirable trait (as we see in animals) and may be a source of pride. They may decorate their tusks, given the prominent features.

Your question reminded me of this
https://en.wikipedia.org/wiki/Human_tooth_sharpening#Examples_in_the_modern_world
and of all other body modifications people are willing to undergo either to fit better in a determined culture, or to feel better about themselves.

I don't see the orcs tusk removal by itself as changing behaviour, but the willingness of each individual to fight instinc could maybe do it.

Superior brains don't signify not having a savage personality either. Some dangerous psychopaths are/were very intelligent.

The Orc is your creation, and it can be anything you need it to be.

Think 'genital mutilation' in humans, or stretching the neck by wrapping wires around it. No need for it to have any purpose, except purely cosmetic It doesn't have to be rationalized.

In real world we consider orcs as a mythical creatures. We are not used to them (I mean, it's extremely unlikely for you to meet a real orc, let's say, on your way home from work). So when we look at them now, we see tusks as a distinct facial feature.

On the other hand, if we were to grow up as a race along with orcs, we would've got used to them and tusks would appear as something quite natural and non-questionable. For example, we do not expect white people to change the colour of their skin to better fit in african societies or women to change their sex when working in male-driven communities. The same applies for tusks, I believe.

In my opinion it would depend on how long the orc race has existed and how much it has evolved. The human race has evolved over thousands of years and these changes can be seen when examining for example the skull of a medieval male against a modern human male. There are some major differences in the teeth and how they evolved during the ages with humanity becoming more and more "civilized".

If orcs in your world have evolved as humans did, there's a good chance that their tusks are becoming smaller, less prominent and slowly resembling human teeth. Since orcs are not using their tusks to hunt or eat foods that require sharp teeth to tear into.

Other than that, and maybe a bit further into the future, an option could be gene manipulation of the fetus to have different teeth or as you mention, teens or younger adults could undergo a procedure to change their tusks.

As others have mentioned, this is your world and you shouldn't be restricted by other universes (forget LOTR or Warcraft etc.) this is your world. If your orcs have evolved from primitives to intellectual beings, then so be it.

Don't wanna spark an evolution-related discussion in the comments but humans were also at some point killing things with their bare hands and tearing into them with their teeth and look at us now (well OK don't look too hard!).

Hope this help, good luck with your endeavour!

I was working on a contemporary fantasy setting at one point and thought there would almost certainly be some cultural element to an orcs tusks (as well as tribal names, icons etc) that would have persisted to a modern era.

There would probably be stories in their mythologies about how the orcs got their tusks, old wives tales about tusks not growing if you don't eat your meat, or mythic heroes with huge ones etc. Their history might have cases where orcs were de-tusked during a period of oppression. An Orc who cuts his tusks to fit in with high society humans may be considered by working class orcs to be a sell outs or traitors, pink on the inside etc.

Extremist orc movements, orc supremacists etc may ornament them as uniquely orcish things to be treasured.

While there may be no practical everyday USE for them, they may still have ideological and cultural power.

Not the answer you're looking for? Browse other questions tagged society creature-design interspecies-relations or ask your own question.

6
Modern Society… Without the Americas?
15
Would a society of simultaneous hermaphrodites have gender roles?
10
Resolving anachronism: Have a modern society with outdated warfare
40
Jobs for Giants in modern society
25
Why would orcs have tusks?
6
What tweaks could be made to a society of intelligent hypercarnivores to allow them to compete with agrarian societies?
6
Tusks of a Cyclops
8
Retractable Tusks?