Is there a way to design a river system in an O'Neill/McKendree-style cylindrical habitat to passively feed into itself in an endless loop, from one end of the habitat to the other and back again?

Reworded: is the Coriolis effect or other innate properties of a spinning habitat up to the task of circulating water, river-like, the length and breadth of the structure? (If so, I would expect uphill flow to be possible in antispinward channels.) 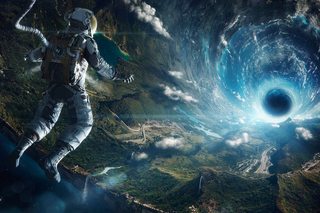 The river must flow as a river does – making water sit still isn't difficult to figure out – without use of pumps. Assume the primary courses/channels are artificially constructed and maintained, which allows for forking and variable depth/width/etc. The system can use underground channels (vertical, lateral, angled) to take advantage of differences in pressure between the inner surface and hull. Dams, reservoirs, lakes, etc, can all play a role.

I believe that there should be some way of achieving this although it might require multiple cylinders for it to work. Consider an arrangement of 4 rotating cylinders such as this: 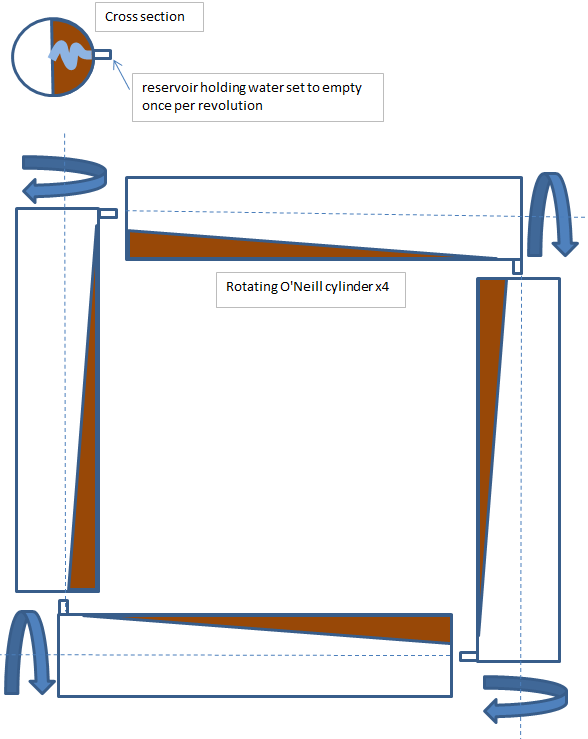 The water in the rotating cylinder at the top of the diagram would flow downhill (from left to right). When it reaches the lowest point it is collected in the reservoir on the far right projecting “below” the first cylinder. Once per revolution the bottom of the reservoir opens when it is directly over the centre of the adjacent cylinder centrifugal forces force the water into the adjacent cylinder and the process is repeated.

Although it may appear that I am suggesting perpetual motion, I am not. The energy required would ultimately come from slowing of rotation of the cylinders by a small amount.

There are many objections to this design on practical grounds such as transferring the water through a vacuum. However the basic principle stands and such issues could be greatly minimised by careful design improving on my basic proof of concept idea.

edit mark 3 counter rotating end torus forces water outwards and back to the central axis of the main cylinder by cetrifugal force. 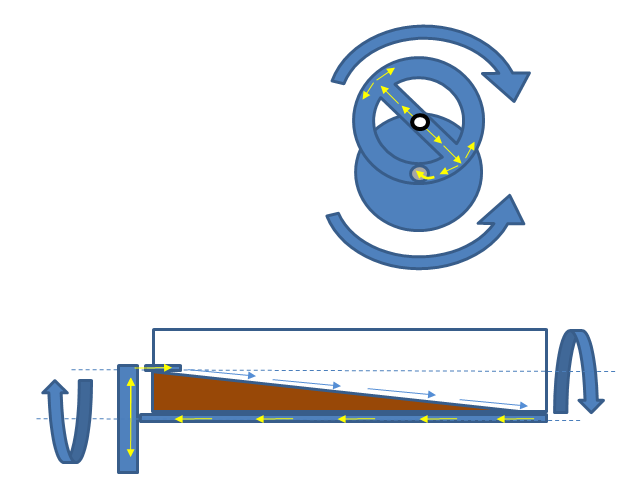 Water flow dissipates energy. On Earth that energy is supplied by gravitational field and from the sun.

If your system doesn't have a supply of energy to the flow, the water is going, sooner or later, to stand still.

The centrifugal force will only help distributing the water on the walls of the cylinder. To move it up some hill you cannot escape using some pumping mechanism.

On the inside of the cylinder - not the caps - the Coriolis force won't have any "horizontal" effects on the flow of rivers.

Maybe you're not convinced. Consider the Coriolis acceleration on Earth's equator. There's no horizontal component to the acceleration, right? Well, on the cylinder, the edge of every cross-section is like the equator, at the same distance from the axis.

I don't think it'll work without active control. Even then, your plan would borrow energy from the rotation which would be bad in the long run.

As has been pointed out, rivers require weather. You have to evaporate water from the low lying pools and release it as rain on higher ground.

Theoretically you could taper the inside of the cylinder near the ends (making the ends of the cylinder "high ground"). Then, with differential heating, make the center of the cylinder warmer and try to start a air circulation patter running from the center to each end along the ground (with return through the axis). This would cause the air to release the moisture that it picked up at the center. This will form a cycle that will allow the flowing of rivers.

The problem that I see with that is that it relies on the rising air releasing its water. In the rotating cylinder, the gravity decreases dramatically as you approach the center. The lower gravity would allow the air to hold larger droplets of water before they are heavy enough to fall.

Would this be enough to prevent weather in the cylinder? I don't know.

If that is the case, this might still work if you have water condensers on the ends (or, maybe, on a spine running through the axis) and get your water out of the air that way.

Only if your willing to vary the rotational speed of the entire station.

Objective : a passively powered lazy river inside an O'Neill cylinder.

That it be an endless loop is actually a requirement. It will flow backwards until it's done contending with the first law of motion. The first part of which makes the water remain where it is. The second part eventually accelerates it due to the friction of the riverbed, at which point it no longer 'flows'. Once that happens you have to slow the station down and let it reset, and then you can repeat the process.

Or, enjoy it while it lasts. After a while once the station is up to speed, without pumps or a water cycle, the water will stagnate.

If we imagine a river that circles the habitat around the axis of rotation I think such a river will have an apparent flow from the perspective of an observer standing on the banks. I will explain my reasoning below.

The first thing we need to address is L.Dutch’s criticism that there must be an energy source to generate flow. As Molot pointed out in the comments that energy can come from the rotational spin of the habitat. In fact, any nonrigid body will lose speed due to friction and turbulence in the gases and liquids inside it. What this means is that the atmosphere and hydrosphere inside the habitat will slow in relation to the rigid surface of the cylinder. Friction between the rigid and nonrigid will speed up the water and air and slow down the ring. This is a constant process that will gradually slow the ring. This means that at equilibrium between the two opposing frictional forces we can expect that on average the nonrigid components of the system will have a slightly longer rotational period than the rigid components. That is to say, the air and water will tend to have an anti-spinward velocity from an observer standing on the inner surface of the ring.

On Earth, a train going around the equator to the East (spinwards) is lighter than a train going West (anti-spinwards). This is due to the vertical component of the Coriolis effect called the Eötvös effect. Essentially, the centrifugal force of the Earth’s spin acts against the pull of gravity and tries to fling us into space. Spinning faster increases this force and makes us even lighter while spinning more slowly reduces this force and makes us heavier.

On Earth, this effect is slight and only important for rocket launches and long-range artillery bombardment, but on our relatively small spinning habitat, the magnitude would be much larger. Now how does this apply to our river? Because our spinning cylinder is “inside-out” compared to the Earth the forces are reversed. Water moving in a spinward direction faster than the water around it will be effectively heavier and water moving in an anti-spinward fashion will be lighter. This means that spinward currents will sink and anti-spinward currents will rise. This will result in the surface of the river having a larger anti-spinward velocity than the bottom of the river. In this way, the Eötvös effect will exacerbate the perceived flow of the river from an observer on the surface.

These forces, the various frictions and Coriolis effects, will act together to cause the surface of a circular river to flow anti-spinward in an endless cycle powered by the rotational kinetic energy of the system which will be gradually lost to heat.

First the hard core facts: What makes a river work on earth is gravity and differences in elevation ie ultimately a difference in potential energy. In this system it is not possible per se to use difference in elevation as a driver of the river because it must wrap around (because water cant travel uphill at any point in the stream).

Mountains are a major contributor to the formation of rivers as water sources. When water vaporizes in the water cycle into the atmosphere it's looking for ways to cool and condense and return. Because of the elevation of mountains they can act as a condensation point collecting the water vapor as rain, mist, dew, etc. This water then flows down the mountain and feeds rivers.

How to make this work:

Strategically place mountains near your river and build collection channels so that they feed their water into the main river. Have all of the streams pointed in the same direction (like right of the mountain into the river). Because all of the rivers tributaries are flowing water in from the same direction this will result in a current flowing in one direction. The river can then be wrapped back into itself.

Water must be consumed from the river or else it would just pool. But this could be used to water fields, civilization, or intentionally be vaporized to further fuel the cycle.

But this is essentially a river, its basically the same concept as a lazy river at a water park.

A heck I just drew you a picture instead, deal with its quality: 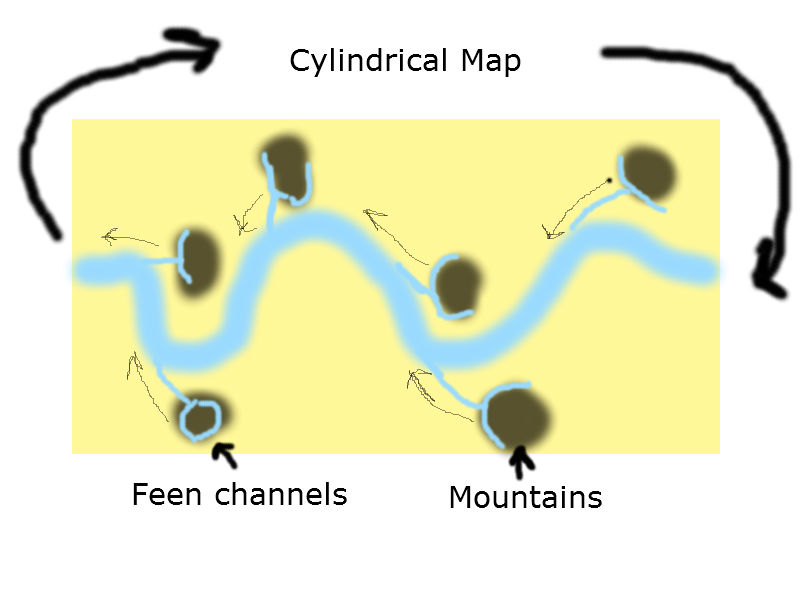 I misspelled "feed" with "feen" oops.

regardless you are using the energy of the water run off from the mountains to drive the current of the river.

Not the answer you're looking for? Browse other questions tagged science-based engineering water megastructures or ask your own question.

1
Possible: Canal town (e.g. Venice) in a River Valley?
13
Stabilizing a McKendree Cylinder Habitat
5
Is it possible to have multiple different climates within one O'Neill cylinder?
11
Hurricane-force winds or gentle breezes in an O'Neill Cylinder?
1
How massive can a structure get on the inside of a Mckendree cylinder?
6
How to allow a cylindrical habitat (O'Neill or McKendree) to radiate heat to space?
3
What is the best form of powered vehicular flight within a McKendree habitat?
10
How to simulate tidal currents on an O'Neill Cylinder
2
Weather forecast for colossal O'Neill cylinders?