Would a jellyfish type of animal be detectable by radar inside water?

On my world a jellyfish type of animal exists, it's an aquatic animal of course and extremely dangerous as it consumes anything organic it touches.

It's thin and wide, like a fleshy transparent blanket, not fast at all depending on the currents to go from one spot to another, mostly it just floats about. The most "solid" parts of it are the millions of tiny, pin-tip like, protuberances which secret a digestive liquid when it catches a prey.

One of my characters is a mariner and on their boat they have a primitive radar system. would the radar be able to detect the animal?

No radar underwater. Radar uses a frequency which is essentially microwaves. The original microwaves were called radar ranges. Water soaks up microwave energy very well, which is why you can cook with them. Radar is not useful underwater. http://www.physlink.com/education/askexperts/ae456.cfm

Submarines use sonar, which is sound waves. An interface between something which was slightly different from water and water might reflect some sound waves and so be detectable. It would not be like detecting a submarine, or even a fish. I think it can be done. 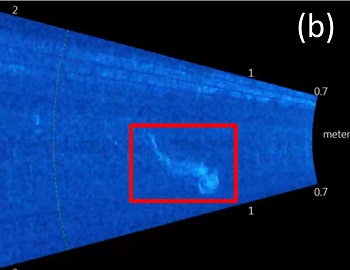 During World War 2, both SONAR and RADAR where deployed against submarines, both from planes and surface vessels. Anti-submarine warfare planes, until they built radar arrays small enough to fit on those planes, where basically large spotter planes, often seaplanes, with a high flight time. They looked for the submarines using their good ol' Mk I Eyeball and binoculars. This was the same for surface ships (they too were retrofitted with radar in the later years of WW2).

When they employed Radar against submarines, it was to detect them when they were surfaced, or later in the war as they were snorkeling, as submarines were basically just ships that could dive for a finite amount of time, and had to resurface when their batteries were depleted. So usually, submarines would surface at night or during bad weather, since spotters would never find them. Radar did help with this, as radar could pinpoint their location pretty good. However, this did not work when the vessel had been submerged. Even if Radar waves were to hit the water surface orthogonally to minimize the huge reflection/scattering effects caused by the water surface, radar will only penetrate a couple of meters, and even if it reflects off the submarine hull then, on the way back through the waters surface it will also reflect and scatter off of that surface. The remaining radiation wouldn't be sufficient to detect anything, as it would be much less than the reflections off the waters surface.

This is also the same with radio. It's why civilian submarines are usually connected to a surface ship by cable to communicate.

So, the alternative to detect these vessels were, at first, hydrophones (basically microphones for the use in water). Sound waves travel much faster under water than they do in air too. However, this method had also multiple drawbacks. First, you'd have to be quiet enough to actually hear the target over your own engine noise, and second, the target must be loud enough for you to be able to discern it from the background. Thirdly, water has thermal layers that reflect sound waves in the same way as water surfaces do with radiation. It got partly remedied by using an active ping, the predecessor of the sonar, ASDIC.

The thing is, both ASDIC/SONAR and RADAR depend on the property of the target to be reflective in a way you can pick up the reflection at your vessel (or deployed buoy or whatever). You will not see anything when the waves get absorbed. You will not see anything if the reflection of sound/radar is not going back to you. If it is reflected away from you, you wont see it. Now, since its waves we are talking about, there is little chance there is literally zero getting back to you, the problem is that what is coming back has to be discernible from all the other reflections you pick up.

Now jellyfish tend to be 99% water... I am pretty sure you won't see that on a rather primitive sonar system, as the wave will probably propagate through the jellyfish. I recon this would be the same with radar, even if you were able to penetrate the waters surface and/or reach more than a couple of meters range.

TL;DR: No, not with mid 20th century technology.

If this creature is a large mat on the surface, it could alter ocean waves enough for it to be detected by radar. It'd have to be pretty large, probably dozens of meters wide, to be detected by a primitive radar set.

There are radar like alternatives to sonar, primarily using lasers or LEDs. You may also be able to detect them via passive hydrophones, if they mute background sea noise or if they emit sound (digesting prey perhaps?). Obviously sophisticated computer processing is required for these alternatives as they are much more advanced and have to filter tiny changes from background.

Seems possible to train something like a dolphin or seal to patrol around a boat and alert humans if one of these things is present. Maybe train birds to drop down on them in a, unknown to the bird, suicide dive. If you are low tech, that is your best bet (other than learning to read the currents and detect these creatures by the absence of whatever it is they eat). Ultimately you could trawl the area with nets and scoop them up.

Unfortunately the creature's jellyflesh is invisible to sonar/radar. Fortunately the same is untrue for the large collection of prey suspended inside and slowly being digested. So a creature that recently encountered and devoured half a schoal of fish pops up on the screen looking like half a shoal of fish.

2
How would a biological radar work?

3
Can jellyfish migrate out of water?
6
Insect-like animal using water for blood?
24
Would Vantablack hide planes from radar?
3
what type of head anatomy would simians evolve
19
Could a jellyfish be bio-engineered to convert salt water into fresh water?
11
Would interplanetary transmissions in the Wolf 359 star system be detectable by Earth?
3
How long would it take for an animal (feline, in this case) to evolve into a humanoid-type being?