I'm coming up with ideas for locations in my sci-fi story and I thought of an interesting one. Here's the scenario:

A planet has a watery ocean sitting on heated bedrock. Temperatures range from 500-100 Celsius deep underwater to around 0 at the surface, varying based on distance from the equator.

I imagine there'd be a deep sea layer of super hot compressed air, followed by a layer of very hot water and bubbles rising to the surface, topped by a surface layer that's largely cool and undisturbed. I'm thinking the heat and activity below would stimulate life in the ocean (it's inhabited).

Furthermore, not sure if this matters, but during winter, the surface would freeze over completely, due to the low surface temperature.

Is this an accurate description of what would happen?

First off, to answer such questions, we need a phase diagram: 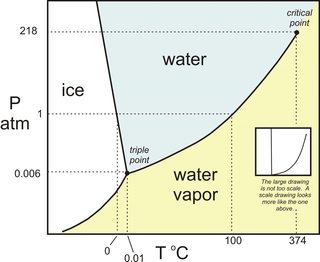 The first thing of interest is the critical point, at 218 atm and 374C. At this point, the boundary between gas and liquid becomes blurry and indistinct. Instead it behaves as a "supercritical fluid," which has some liquid and some gas properties. At 1atm per 10m of water depth, that means any bedrock below 2.2km of water is going to be covered in supercritical fluids that act rather interesting. For reference, the Challenger Deep is the deepest point on Earth, at just shy of 11km.

Shallower than 2.2km, you'll have something like the behavior you describe. Water which touches the bedrock will get heated. If it gets heated faster than convection can move it upwards, it may boil. At that point you would see water vapor bubbles (not air bubbles) moving upwards. However, very rapidly the water column is going to cool those water vapor bubbles, so they'll turn back into water. This process, on average, is not going to have any net upward movement, so you are correct that the surface will be tranquil. Also, I'm not sure 500C is hot enough, because you are going to develop some mighty impressive convection cells which will quickly move the water away from the bedrock, replacing it with colder water. I don't have the calculations on hand to figure out the correct temperature.

This will not work for several reasons

First the oceans would never be able to form, water run off/rain would keep boiling away before it can build up, this will continue until the rock is cool enough for liquid water to sit on it. This is what actually happened on the early earth and you end up with a perpetual rain storm not an ocean. Heated rock under the ocean only works on the small scale, like the mid-ocean spreading centers on earth.

The other issue you have is water is a better thermal conductor than rock, so the surface rock will be cooled faster than the rock below can heat it, this will produce a very irregular surface, making the leidenfrost effect difficult to maintain. the fact the surface is being cooled means even if you managed to create the leidenfrost effect it will only last a short time, like minutes, before the surface of the rock is cooled to the point it cannot support it.

Lastly your atmosphere can't be cold, your massive heat source will heat the ocean and the atmosphere rather quickly, the surface will never be cold enough to freeze, not on an earth sized planet anyway. This is the scale problem again, the bigger your hot area is the better it is at heating the entire ocean.

Have you ever watched a pot of water boil, same concept.

Because water vapor is less dense than water you will never have a vapor layer over the rock layer. The water will quickly drop around the vapor as it rises causing those bubbles you see in a pot. Furthermore the pressure of the ocean would be forcing the water down faster. (For you more science inclined please excuse my simplification of this process)

Could it ever be hot enough to create a vapor layer?

No, because you wanted the surface to be placid you need the bubbles to cool and condense before they reach the surface. The heat required to generate a vapor layer would undoubtedly boil the whole ocean.

Is this scenario otherwise plausible?

yes sure, ignoring the vapor layer even our own ocean has under sea vents and volcanoes where water is boiled and cooled before it reaches the surface

Not the answer you're looking for? Browse other questions tagged science-based environment geography or ask your own question.

15
A continent lost underwater?
8
Can a planet have more than one ozone layer?
4
Planet with Titanic tectonic plate
9
Would a shallow ocean planet be possible?
6
Boiling sea between volcanoes
20
Why build underwater outposts, rather than ocean-surface settlements?
2
Equatorial or Meridial Ocean
3
How would a 384 hour day/night cycle on a desert planet affect the weather?
5
What would happen if the boiling point of a section of ocean was lowered to 5C?