The existing prototypes are lightweight and do not restrict movement as much as traditional spacesuits. They also seem to be safer when it comes to tearing (no depressurisation). A new generation of materials can make them self-healing to reduce risks even further. Scientists are also looking into using alloys and special wired structures to work as exo-skeletons. Mechanical compression has an additional benefit of slowing down the bone loss process typical for low-gravity environments.

The list of possible advantages and benefits goes on and on. However, I could not find anything specific on radiation protection. What materials or technologies can be used to protect from radiation given that the wearer has to spend hours working in deep space outside of spaceship?

NB: Something like contemporary EMU is not an option: too bulky, low mobility, and high risk of decompression due to minor damage from a tiny asteroid. My astronauts need (and want) greater freedom of movement and lower risks.

How about an umbrella? 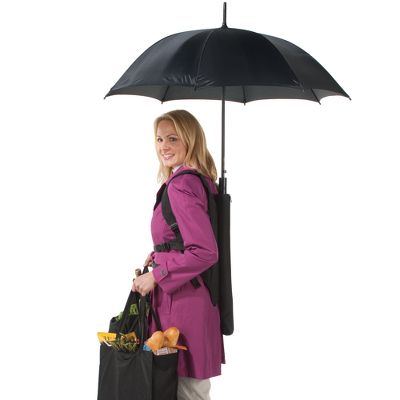 People have been using umbrellas to block radiation for a long time. Here is Robinson Crusoe and his goatskin umbrella. 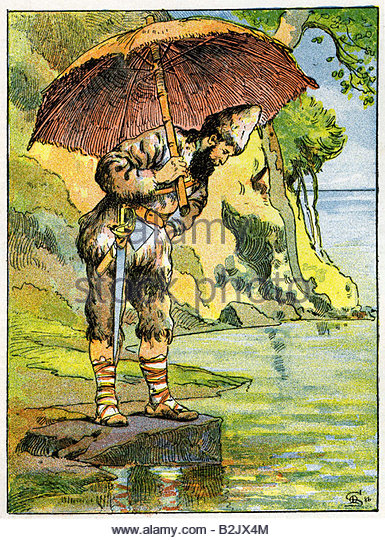 Seriously! An umbrella gives a large area of coverage. It is not attached to your body so not in your way in the same way armor would be. It can be reoriented to give directional protection. It can be detached and folded up and put away.

A backpack mounted umbrella could have a detector and servos to orient it to block the largest amount of incoming radiation (probably from the sun, just as is the case on earth). It would automatically pivot to shield the astronaut. An umbrella can expand to be very large, completely shading the working astronaut. I mean large like 5 meters across - such a large umbrella would be impractical on earth because of wind and air resistance opposing motion - a nonissue in space. These umbrellas will move with the astronaut, attached via the pack. The huge shady bulk of them will be out of the way of arms and legs.

As regards the material of the umbrella, lead or gold would be fine. An optional beryllium overlay if energetic neutrons are a problem.

The astronaut would need to move slowly because of the inertial mass of the umbrella.

You don't want lead or other heavy shielding because the biggest danger in space is"particle" radiation, atoms moving at near light speed. When the particles hit heavy shielding they produce a ton of secondary radiation. However, PVC sheeting has shown promise in this application. See https://www.google.com/amp/s/amp.space.com/21561-space-exploration-radiation-protection-plastic.html .

What radiation, specifically? Cosmic radiation is omnidirectional and omnipresent, but can be tolerated for extended periods of time. There is no real need to protect against it during space walks so long as the astronaut has a shielded living area and good health care, assuming they won't be spending years in space.

Solar radiation is unidirectional but isn't particularly dangerous except during flares, which can be predicted. In this case, no amount of man-portable shielding is really going to help, the astronauts will have to retreat into a bunker that has extensive shielding, coming out when the flare is over.

Repeated crossing through the Van Allen radiation belts (or equivalent for another magnetic body) is really bad, so don't do that.

A possibility is a personal magnetic field, shielding the wearer from cosmic radiation. Alas, humans can't operate in a magnetic field strong enough to be effective. Setting up a magnetic field around the ship may be possible, but then an astronaut on a space walk may be outside of it, or worse, continually crossing into and out of it, which just exacerbates the problem (though not much for a ship sized magnetic field).

Another viable option is to harden the human. Improve DNA repair mechanisms, limit free electron damage, boost cancer fighting medications and diets (if you ascribe to the ketogenic anti-cancer theory), keep the humans inside a protective shell and use remote drones for space walks, get between locations as fast as possible, etc. Even with all of this, there will still be a slowly progressing radiation countdown for astronauts with every second spent outside of shielded areas. But with careful selection, you can pick folks with really high radiation tolerance, their kids may also have it, and eventually you could breed a group of "spacers" that can operate in space for extended periods of time with minimal radiation side effects, so long as they can avoid the worst solar flares.

Okay I'm going to go with a complete suit made from a number of layers, 4-7 are the heavy radiation stops you're really interested in I believe. The layers are all quite thin, the total is probably an inch or less of material, from the inside out:

The following four layers can probably be stacked in any order, or possibly integrated into a single bi-layer material but I think this is the best layout for separate layers.

The outer layers of the suit, ultimately these are, and must be, disposable as they're exposed to raw vacuum and cosmic radiation.

These layers are used for the body and back of the helmet, there are two helmet approaches; the first is a full cover opaque helmet with video feeds displaying the outside environment, the other is to use a front visor, personally I favour the first approach, more protection from radiation etc... and you can't get blinded by accidentally looking at the sun without the shade down if you're closer to the sun than say Venus. The modern space helmet face plate is already about the last word in transparent radiation shielding. Gauntlets are excessively exposed so must be disposables, they comprise of plates composed of full layer material on the back of the hands and finger joints, as a rule, the backs of your hands are more exposed than the palms so the extra material is warranted. The palms and finger tips need to be thinner for the sake of dexterity, so we abbreviate, a thinner life support set that contains insulation and moisture absorption only relying on core temperature to regulate the rest, and use a relatively thick, 3+mm at rest, layer of lead-heavy gel to provide some but less impact protection and maximum radiation shielding in a flexible format. The gel will thin when pressured to improve grip. Or you can forego "by-hand" tool manipulation altogether, and use "waldos" instead in which case the suit looks a bit like this and the operators' hands and arms are no more exposed than any other part of them. Suit joints can use the same leaded gel as the gauntlet palms making them relatively vulnerable but extremely flexible.

Most stellar radiation is in the lower energy band and the stellar winds are primarily composed of protons these are relatively easy to deal with as outlined above. Cosmic Radiation, in the form of high speed, high energy particles will blast through any one or two of the proposed layers without slowing down, which is why there are a number of absorbent layers in the suit, these will hopefully combine to slow and capture cosmic rays. Please note that there will be instances where nothing you can wear will be sufficient, flares, solar-storms, gamma-ray bursts all represent lethal conditions for those caught outside, and possibly even those inside as well.

By the way if you're worried about expense those Gold baffles are paper thin, manufacturing will cost far more than the elements being used.

First I want to point out that if they are able to automate mining they can more easily automate ship repair. I wouldn't be surprised if this technology is 'realized' very soon =D.

As for the actual question:

Radiation is very hard to protect against, usually dense materials work best like lead or gold. there are also plenty of other materials capable of reducing radiation.

What protects the Earth from this radiation is its thick atmosphere of water vapor but also this critical magnetic shield called the magnetosphere. The magnetosphere is believed to be caused by the motion of liquid metals in our inner core. So one other possible thought is that the ship generates its own magnetosphere to repel inbound radiation or even the suits somehow generate a field large enough and strong enough to do it (personally the ship sounds more realistic as that protects everything with one large device).

Not the answer you're looking for? Browse other questions tagged science-based space .

14
Radiation sudden stop
11
Is a gas-mask as a spacesuit possible?
9
Habitable environment on a big moon of a gas giant lacking magnetosphere
9
How to Effectively Collect and Recycle Space Junk?
2
Effects of severe radiation storms?
17
Creating a scientifically semi-valid super-soldier, part 6: Radiation protection
20
Can a habitable moon rely on the magnetosphere of its parent planet for radiation protection?
4
Stellar and magnetic parameters for creating polar radiation hazards
2
What configuration would provide the most protection for a male dragon's reproductive organs against mechanical and chemical attacks?
2
Mechanical Energy Absorption