A sub-group of Orcs have settled into an area that is occupied by humans who culturally resemble the Greeks from the Hellenic period. These Orcs, who physically resemble Orcs from The Elder Scrolls, decide that having the lower tusks is holding them back from achieving greater understanding or makes them uncivilized or something like that. They start to remove the tusks of their youth when their adult tusks (like adult teeth) come in.

Given the above scenario, what would change about there jaw structure and teeth arrangement? Would they just have nothing where the tusks were or would their teeth spread out? Also, how long would it take for them to stop developing tusks or would that never happen? What are some other impacts that I have not thought of to ask?

Edit: Here is the question that sparked my interest in creating a tusk-less orc sub-species. The appearance of these tusked Orcs would be very close to The elder scrolls Orcs. 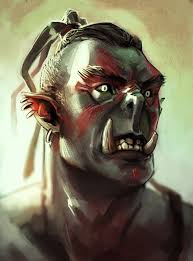 For anatomical realism, any science behind tusked animals will do, with preference to tusks from the lower jaw. The main point of asking my question was to look for ways to incorporate this subspecies with a logical reason as to why they lost their tusks, so readers don't feel cheated with a cheap reason. All the answers are great! I am leaving the question open for a few more days to gather as much information as I can! Thank you everyone!

Teeth move. If you pull a tooth, other teeth will move into that place. Pulling impacted wisdom teeth can remove crowding on the front teeth and that is something we humans routinely do to our kids. Pulling normal front teeth (sometimes the canines) can be done if teeth are crowded in front, and then braces to get other crowded teeth to move into position.

If orcs are humanoid and a tusk is an exaggerated canine, adjacent teeth will move to partly fill the space. Front teeth might gap some. In some animals with tusks, the tusk has a big space to itself - true for elephants for sure and to some degree for pigs (see below). 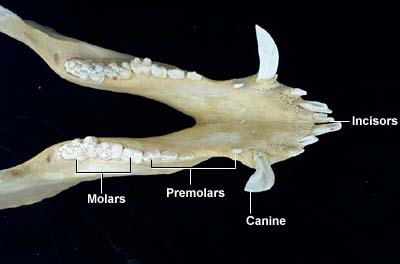 Pulling the tusk will not change much for the orcs. Other teeth will do their jobs fine.

No tuskless-born orcs. Supposedly the incidence of congenitally tuskless elephants has increased greatly over the past century. This is because the tuskless ones don't get killed for their tusks and so have better genetic fitness. But this is not the situation with your orcs. Having tusks pulled does not change the DNA coding for tusks or change your chance of living to have children. Jewish males still are born with foreskins despite their parents systematically removing them for 3000 years. So too your orcs. Except with tusks.

The other teeth would likely spread out to fill or partially fill the gap. It all depends on if the other teeth already have enough room in the jaw.

As for loosing the tusks completely, that would be more dependent on chance. Ordinarily, if an Ork was born with the defect of no tusks, they would have a hard time finding a mate and be removed from the gene pool.

If they have their tusks removed at a young age, then those with the tuskless "defect" may be marked so at birth and thus grow up having a higher status. Otherwise, they will look just like any other tuskless ork. In the latter case, the defect won't be selected out but it won't have selection preference either.

With creative liberty you can pretty much get away with everything you cross your mind with, just give it an explanation, like magick preventing damage after removing the teeth or the removing of teeth making the Orcs more docile and less violent because they psycho have register this pattern as the cause of pain and teeth removal.

Or if you are looking form more scientific base scenarios, The dentrys job was a pretty awful line of job for most of human history, it was risky performing even the simplest surgery in patients with out sterile knowledge and no antibiotics in order to prevent death after surgery.

Mostly people who broke their teeth have to wait until they teeth were rotten and then pull with strength to put something that prevent infection, and also alot of drugs to minimize pain.

Orcs will not go trought this process by choice.

Mostly likely they will simply drill or mold they that periodically in order to make the teeth smaller and smaller.

After some 100-300 years of this, the mutations of smaller teeth will be enough commont for the great majority of ors, to be considered "normal" to orcs to not develop big lower teeth.

(Just as humans consider drinking milk at any age normal, It was not, we evolve in order to...)

Orcs that can survive this ritual or making an important habiit, will develop a new way of life, and most likely a new way to play with other races in the world.

Honestly, it's your creative choice

you would have to decide if your orcs continuously grow tusks like or are they like teeth in the sense once removed they don't come back.

What I'm trying to get at is, orcs are a fictitious creatures and their biology is largely the whimsy of the creative writer.

It is reasonable to conclude their biology would do either or any of what you mention.

Not the answer you're looking for? Browse other questions tagged society anatomy .

33
Why would orcs have tusks?