Ask Question
Asked 3 years, 3 months ago
Active 3 days ago
Viewed 183 times
3
$\begingroup$
Closed. This question needs to be more focused. It is not currently accepting answers.

I started to write a story that is about a huge and catastrophic climate change. The story is narrated as a series of unconnected episodes (in large part) that have different protagonists from around the world who testify to the consequences of such a cataclysm. I do not want a 100% scientifically correct story, but I would like, in principle, to have everything in the narrative is not completely impossible but only very unlikely.

As the trigger for this climatic cataclysm I first hypothesized the classic shutdown of Thermohaline Circulation then a huge methane eruption but in the end these two events would not work fast enough, and would not be quite catastrophic enough for the scenario I imagine (yes, I like to exaggerate). Meteorites and super-eruptions intense enough to cause the change I imagine would have to be more catastrophic than climate change they cause. So I chose a more exotic and dramatic idea: a drastic change in the Earth's orbit. I imagine a retreat of the Earth from the Sun by about 20 million kilometers.

Now I wonder, what could cause such a change in orbit (without notice and without completely expelling the earth from the solar system if at all possible) and how fast it could happen (I would like to see events take less than a decade, but I do not know if this is possible).

I hypothesized that the passage of a wandering black hole or a cluster of high-density dark matter near the solar system could cause this perturbation of the orbit (which I know, though infinitely improbable, are not impossible events) but I would like more clarifications.

Lastly, I wonder, given that at that distance from the sun the Earth's temperature would drop by about 15°C and that the poles would cool much faster than the rest of the planet, what would be the effects on weather? I expect (at least in the short and medium term) a large increase in storms and in general extreme weather caused by the response of the atmosphere to this massive imbalance (among the various events I would like to include massive Arctic storms similar but scientifically more accurate to those portrayed in the film "The Day After Tomorrow").

I know it's a long and articulated question and my English is not the best (I'm Italian) so I apologize.

Moving planets around involves lots of energy or time, and the basic, "low tech" means of moving any body is described here

For the more ambitious, the works of Paul Birch describe means of harnessing a fraction of the Sun's radiant energy using "solar windmills" to accelerate high speed projectile streams and move planets around in a timespan measured in decades rather than millennia. This is simply the first method ramped up to "11". The paper to look for at the link is "How to move a planet" 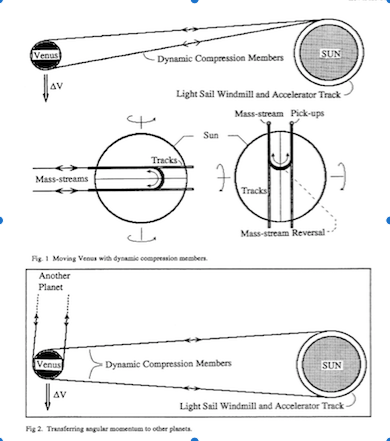 Moving a planet as per Paul Birch

Here's a wild one

A Kuiper belt object the size of Pluto manages to take a path to the sun such that its gravity manages to avoid the Earth's. It arches around the sun in such a way that it collides with Venus sending Venus hurtling out of the Solar System. On Venus's path, its gravity affects the Earth's just enough to expand its orbit to your desired distance.

This is a ridiculous conjunction of lucky chances but not impossible. Similar events such as this are theorized to have happened during the birth of our solar system that resulted in the current planets orbits.

This would result in the cooling effect you are looking for. This would inevitably cause extreme tidal waves and an ambiguous effect on our moon (depending on its location during the event). There is also a plausible concern as to what would happen with our atmosphere though I think there is a mathematically safe enough margin somewhere in this system that we won't lose it.

Edit: Im using KBO's (Kuiper belt objects) because they are the only thing in the solar system big enough and unstable enough to act as a "rogue planet" to travel through the system in such a way that their gravity momentarily provides enough pull to enlarge the Earth's orbit. As comments have suggested this may be achievable without the use of Venus. It could also be that this is an Extra-solar rogue planet and not a KBO. But the root mechanic is the same. A massive rogue object passing the Earth in just the right path to drag it slightly from its path without robbing its atmosphere.

It looks like you've got the basics i.e. you need to remove vast amounts of energy from Earth's orbital momentum thus expanding our stable orbit. Best way to do that is to use a large mass to drag on the Earth with it's gravity, you would use a planet or anything like that, virtual mass from exotic matter is your best vehicle, otherwise it can't easily dissipate and the orbital changes will continue. Depending on the rate of change there wouldn't be noticeable effects like earthquakes at all, in the case you've outlined the net effect is to slow Earth's orbital velocity by less than 2km/s or about 6% over the course of a decade so you probably wouldn't notice that, the secondary, climatic, effects would be noticed first. If you want it to happen over a decade you need something in the planetary range, particularly a Gas Giant worth of mass, parked in a reasonably close orbit both spatially and in period (alternately you might be able to park it near L3 and get the same effect), to slowly drag Earth away from the Sun.

We don't know enough about how the climate really works to know exactly what the effects would be in any detail but we can make some reasonable guesses about some effects, Earth's atmosphere is a buffered system so the change will be rapid and occur after some time when the situation passes a crucial "tipping point". The storms from Day After Tomorrow might actually be mild compared to what really happens, we just don't have the science to make a good estimate in this situation. Personally I'd take a "go big or go home" approach to it.

Couple of notes and addenda:
You could do it quick and dirty with a transitory mass but that's going to be a change in weeks or months not years.
You could add mass and/or spin to the Moon and let tidal forces do the work from there but the effects would take Ages and there would be other consequences, like slowing the Earth's rotation, possibly to a stop.
If you use a dissipating mass you're talking about either using what David Brin called a Cavitron in the novel Earth which is still highly theoretical or ASBs. Also it will have to start out much larger than a real mass like a planet would need to be to do the job since it will shrink over the course of the move.
Most importantly for the future of your setting ANY mass that transits the system or gets parked "near" Earth and slowly evaporates will turn the solar system into a shooting gallery for Kuiper Belt, Oort Cloud, and Asteroid Belt objects and Jovian Trojans knocked loose from their traditional orbits by the system-wide gravitational perturbation and flying all over the place, planets will get hit, a lot.

Not the answer you're looking for? Browse other questions tagged science-based apocalypse climate orbital-mechanics or ask your own question.

16
Could humans alter the moon's orbit significantly with current technology?
15
What could cause Earth to slowly fall out of orbit?

20
Is there a man-made or natural event that can cause an abrupt climate change within hours/a day?
21
Effects of a non-rotating Earth
3
Is there a mechanism to strongly heat up the Earth from the inside?
6
Climatic consequences of two Polar Oceans and a Circumspecting Landmass
20
What would cause the land to “rise” in a future, post-apocalyptic world?
5
Where would the Sun and Moon be within a flat Earth world?
2
What's the climate consequences of a planet with these characteristics?
6
How would the weather and organisms and flora be affected on an Earth-like planet with floating continents?
5
If Theia had settled into a slower, near orbit to Earth, how would that effect climate activity?