Would human body adaption to sub-zero temperatures be actually beneficial in arctic climates?

The setting is in tribal times.

I was thinking about a being (or a tribe of beings), living in arctic climates where the temperature is mostly or even exclusively below 0 °C, that is identical to an ordinary human with one important exception:

The "obvious" conclusion is that such an adaptation would be extremely useful in arctic climates while confining such people to arctic climats only; but is this actually true?

Assume that "winter people" come to battle ordinary Eskimo. Both parties wear leather armors for protection. Now, however counter-intuitive this would be, the Eskimo seem to be at advantage: when a fighter exhaust himself, his body necessarily generates heat, which is captured by the leather clothing; as a result the Eskimo's requirement to maintain a high body temperature is met more easily, while the "winter people" have trouble in cooling their bodies and risk overheating. The "winter people" would solve this issue easily by forfeiting leather armors; but I suppose even if the armor is only made of hardened leather wearing such armor nevertheless provides a huge advantage during combat, basically dooming the unprotected to destruction.

Thus, being a "winter person" is actually a major disadvantage whenever things are going violent.

Is this analysis correct?

Background: Inspired by Ashe's story from LoL, I was thinking about a goddess of winter granting divine powers, including the said adaptation, to her few chosen ones. Such people would be great heroes, warriors and leaders, fabled through generations. Err... Thinking about it some more... Would they really? Wouldn't such a gift be more of a curse really, for reasons outlined above practically making such a person unable to defend themselves from anyone who does not enjoy the Goddess's powers?

First of all, what adaptation may this homo frostus have?

Well, it sounds logic for him to have a thick fur and a thick ipodermic layer of fat tissue. That's why polar bear do not wear k-ways!

Surprise: they are both decent protection against piercing (to be lethal a hit would have to penetrate in depth enough, and that will block also the assaulter).

So, it looks like your homo frostus have no need of wearing additional protection, and this is an advantage. Like polar bear they can better hide in the snowy background. Which again is beneficial.

Yes, polar bear do suffer a lot warm temperatures (also huskies do), but normally they don't spend the summer in Formentera.

When people in cold climates exercise the warm up if they get too warm they sweat which their clothing absorbs, then then when they stop exercising their body temprature drops dramatically because their clothing is now a poorer insulator and cooling through evaporation.

Yes, the adaption would be beneficial. Your main concern seems to be a combat imbalance with non cold adapted humans, and adaptability to non-cold climates. Lets take these one at a time.

Combat: Likely not a negative factor, particularly when fighting in the cold, on "home turf" These humans will need to be active and mobile, and capable of carrying and managing the movement of loads. If they are living a tribal lifestyle, that involves a lot of hunting, gathering, and general hard labor. Putting on "armor" for combat is unlikely to have a large factor in home turf. Humans, are combat capable while carrying a lot of gear:

Their warm weather adversaries would need to bring their combat gear, supplies, AND warm clothing. They would be at a distinct disadvantage.

Now when traveling to warmer climates and trying to manage heat they could be at a disadvantage, and suffer symptoms of heat exhaustion/hyperthermia in temperate climates, and be unwilling or unable to enter warmer tropcial or desert climates.

Adaptability: They would have an advantage in adapting to temperate climates, Their thermoregulation, maintenance of body heat, requires the burning of calories. As long as they are not so warm that they are fighting against the heat, they are simply burning fewer calories than their "home turf" baseline. This would give them the ability to expand into temperate climates during the winter, fortify, and attempt to defend them during the summer.

Your cold tolerant people are not necessarily hot all the time. They could switch on the heat when they needed it via brown fat

BAT is especially abundant in newborns and in hibernating mammals. It is also present and metabolically active in adult humans, but its prevalence decreases as humans age. Its primary function is thermoregulation. In addition to heat produced by shivering muscle, BAT produces heat by non-shivering thermogenesis.

Here are some sweet PET scans showing metabolic activity in black. You can see that this person (perhaps the great-granddaddy of your cold adapted people?) can turn on the brown fat and make heat when needed. The guy who is just plain fat does not do that. 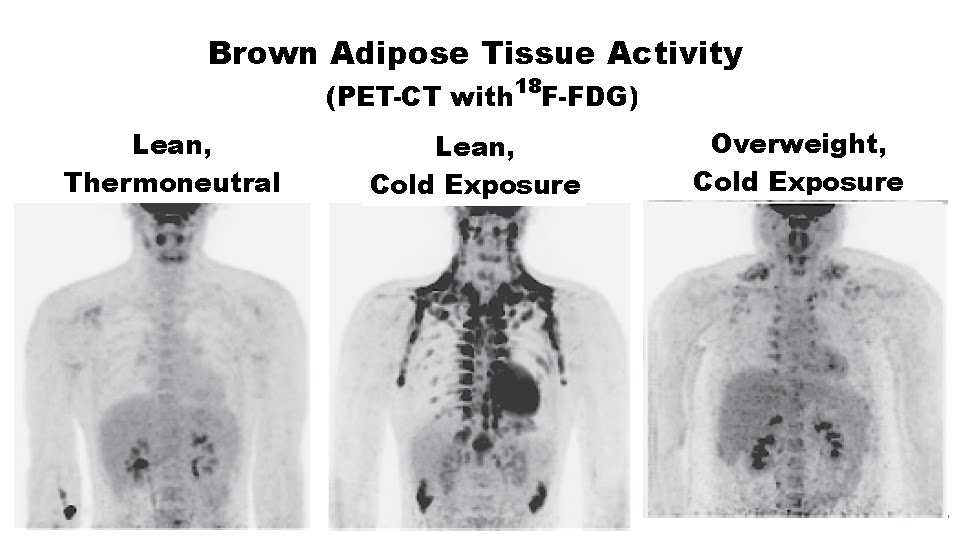 If your people are rigged like the depicted man, they can turn the heat on and off as circumstances warrant.

But maybe you want naked sweating warriors in your story. I know I do. If your folks have brown fat that is stuck in the ON position then they would be as you describe: they have to go naked and deal with excess heat - perhaps by sweating a lot. They would also need to eat a lot of calories since they burn so much all the time.

As regards the prospect of armor, I am not able to find the quote by Bêlit, Conan's pirate mistress. Nor despite sore tempatation will I link any images of Bêlit. Bêlit goes pretty much naked. At one point, she points out to Conan that he is huge and strong, and so can carry his armor, and wins his fights by brute strength, not speed. She is not that strong and so must count on being quick - and armor slows you down. So too your hot Hyperboreans. They can be lean, hot, skinny and quick, and fight a different sort of battle than their Inuit opponents.

I think we may be looking at this the wrong way. Instead of saying that the Frosties would have an advantage in battling Inuit, it's way more likely that there wouldn't be any Inuit -- since the Frosties are well adapted to this environment, they'd've essentially "filled up" the far-northern ecosystem before Inuit-forbears showed up. It took a long time for the proto-Inuit to develop all the gear they needed to survive up there, and happened in stages. In this new scenario, they'd be blocked because someone else already lived there.

In terms of direct benefit, possibly. It'd probably mean that they could spend less time and effort maintaining their kit, and more time doing other things.

Presumably the frostus have a large logistical advantage. Not needing fire or shelter allows for much easier raiding and moving camp.

Also what does it take to survive a fight? A frostus needs to not be killed, if he gets away he will probably fight again. An Eskimo needs to have enough gear intact to survive the night, that means a cut to a parka arm might be more of a problem than a cut flesh arm.

Vents are not impossible to add to a vest or helmet, and shields do little to interfere with heat management. There is also expected to be plenty of cold reservoir around, say snow or ice that can be eaten or rubbed under even restrictive armor.

And Eskimo who sweats has a problem. Cold air doesn't evaporate water very quickly or effectively. Either the water sits on his skin which will ruin his heat management after it cools down, or he exposes his skin to the air, which makes his armor have similar requirements to the frostuses.

The leather armour is only a problem for you Frosties if it is total coverage. If the armour is only functioning as armour and not also as clothing, then they can 'miss out' lots of bits which are compulsory for the Inuit, and cool down via their exposed bits of flesh. For instance, imagine them dressed in leather armour which resembles the armour of a Roman legionary, but without the tunic underneath. They'd have bare legs, bare forearms, bare face and a bare backside! And sandals on their feet. If they are not at risk of frostbite, then bare hands and bare feet may be normal for the Frosties.

So you could dump the idea of armour-as-clothing, and just give them armour-as-protection. Any leather is only there to hold up pieces of bone and tusk which they are using as protection. Here is some bone armour from Lahti City Museum

The Inuit may also be at risk from overheating. Efficient clothing will trap all the heat from exertion. They can't really stop to take off a parka in the middle of a battle.

As to confining them to Arctic climates - the Frosties would also be adapted to mountain climates, in areas where there is a permanent snowline. Of course, they'd need additional adaptations to the low oxygen.

24
How would the human body develop under a different gravity?
16
How many "years without a summer" can society survive?
27
What would happen to a human body subjected to extreme water pressure?
2
How could overclocking the human body actually weaken my abilities?
2
What would be the ideal "language" to control a complex machine via a human body?
3
Would this setup of a terraformed moon hold up?
2
What would it take to get the temperature of the human body to rise to 3,000 °F?
5
Would furred sophonts, especially children, need clothing/blankets?