Could a solar superstorm or distant supernova wipe out all our extraterrestrial technology?

I'm imagining a universe where interplanetary, but intrasystem, space travel is common (e.g. at a similar level to The Expanse books/TV show) - but not necessarily our local solar system. Perhaps we have colonized far afield through some method of FTL travel that is no longer available to us, as in this question: How do I get rid of the Earth or local Solar System? .

Most bodies in this system have a high degree of economic activity around them, but most of our extra-terrestrial human population is concentrated in O'Neill-cylinder shaped orbital stations rather than attempting to terraform highly unsuitable planets, live in <2g or >40g habitats and deal with frequent high-g discomfort of rocket launches. Most planetary activity is the work of drones.

Without significantly damaging our system's planets and moons, what event could destroy the majority of the orbiting technology, leaving few intrepid survivors scavenging for survival in orbit.

I've been reading about various different solar (or here, stellar) events. It seems that stellar flares and CMEs occur in specific directions and would only affect small sectors of the system at a time. Could a sufficiently strong stellar EMP render everything inoperable?

What about a near-system supernova? Most of what I have read about them talks about gamma rays, heavy element creation and ozone damage, but could the shockwave itself achieve this if the distance were just right?

To summarize, I'd like to turn a system with 7-10 planets, 30-40 moons and ~200 space stations in stable orbits into one with ~3 space stations and a lot of scrap metal without significantly modifying the orbits of the bodies. None of the bodies are life-supporting so permanent atmospheric/climate changes are fine.

It’s a little bit like cooking. You want us not over done so there’s no one left, not under done so there’s too many left, but done just right so there’s just a few left. A tricky one, as it would depend on all sorts of factors such as the size and thickness of the structure of the O'Neill-cylinders. But I would have thought that a Supernova 10-30 light years away should be a good starting point.

Rather than trying to adjust the “cooking” energy level exactly, perhaps it would be better to look at ways in which the 3 orbital stations were a little different from the others. So for example perhaps these 3 had just finished construction and were all still tethered to or very close to “small-medium” sized metallic asteroids which were being used as construction sites and as the source of materials for the stations.

They might have been lucky enough to either already be shielded by chance alignment, or to be capable of reaching such a position very quickly within minutes or a few hours. By maintaining a large asteroid between the orbital station and the supernova they would have (unlike all other orbital stations) a massive shielding advantage.

This would allow you to “over-cook” our system by having the supernova even closer, but still leaving 3 relatively unscathed stations and the rest dead. That said there would probably be survivors in underground facilities, mines, submarines and similar somewhere.

A planets mass would shield the inhabitants totally when facing away from the supernova but when facing towards it they would only be shielded by the atmosphere, which, depending on distance, might well not be enough to save them. Orbital rotation would act as a giant roasting spit exposing the supernova to the surface 12 hours a day. Arctic and Antarctic habitats might be spared depending on the time of year and the location of the super nova in the sky. The best planetary cooking location would be in the plane of the ecliptic to ensure even radiation bath. Supernovae near the celestial poles would only cook half the planet.

A close by collapsar can reach its fate.

the core of an extremely massive, low-metallicity, rapidly rotating star collapses into a black hole in the final stages of its evolution. Matter near the star's core rains down towards the center and swirls into a high-density accretion disk. The infall of this material into a black hole drives a pair of relativistic jets out along the rotational axis, which pummel through the stellar envelope and eventually break through the stellar surface and radiate as gamma rays

The resulting gamma ray burst will "accidentally" point to your system, shining it with a lethal dose of highly energetic photons. Intense gamma rays are very likely to damage electronics and therefore most of the orbiting system would turn to scrap.

It is thought that some past extinction events were caused by gamma ray bursts or nearby supernova bathing the Earth in energetic radiation. Now the amount of radiation is enough to pierce the Earth's magnetic field and strip away the Ozone layer, bathing the planet below with energetic ultraviolet radiation from both space and the Sun, but not enough to melt stone or set forests on fire, so the actual physical damage is going to be limited.

This leads to a second problem. Space structures and colonies, unless built in places like Low Earth Orbit where they are inside the planet's magnetic field are already going to be heavily armoured against radiation from cosmic rays, solar flares etc. The general rule is a space colony needs the equivalent of 5 metres of slag or water to stop incoming radiation, and this would also provide armour protection against micrometers, small space debris and so on.

In order to cause the sort of damage the OP is asking for, there needs to be a massive amount of radiation being directed at the solar system, which to me suggests the "beam" of energetic radiation that is associated with pulsars. 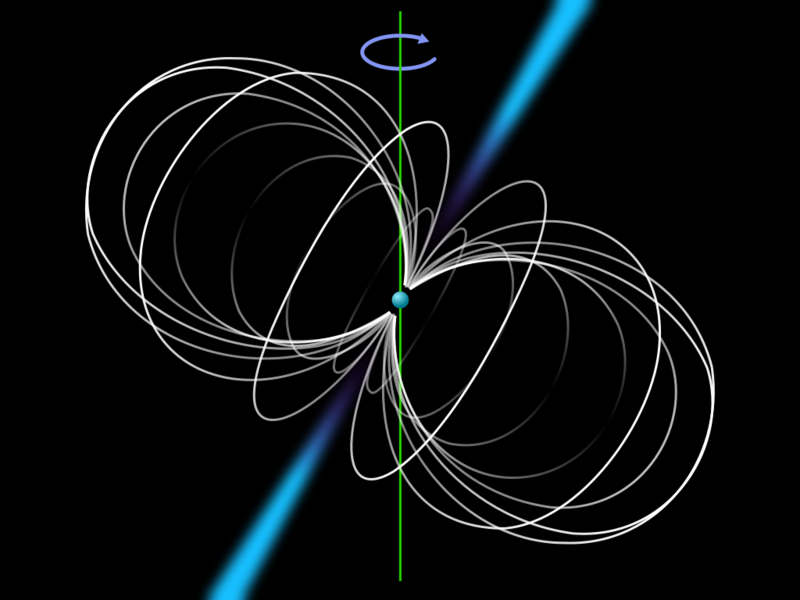 Schematic of a pulsar

The highly charged beam is dangerous because it is narrow and intensely focused, which leads to the other situation where it will miss large portions of the solar system. Random survivors will be found anywhere there is suitable shelter and where the beam has passed harmlessly by without interacting with the shelter or body in space.

The other issue is no suitable astronomical body is anywhere near the Solar System to either be already in place (although you would have to rationalize how a pulsar's axial inclination can be changed to "aim" at the Earth) or a star capable of becoming a Type II Supernova and leaving a pulsar behind as a stellar remnant. Anything farther away than @ 10 Ly is probably going to be too far away to maintain a focused beam with enough energy to harm the solar system.

Yes. The closest "safe" distance to a supernova is estimated to be between 50 and 100 LY. http://earthsky.org/astronomy-essentials/supernove-distance

Not the answer you're looking for? Browse other questions tagged science-based science-fiction space apocalypse science-in-society .

13
How do I get rid of the Earth or local Solar System?

20
How would the sudden destruction of Earth affect other planets within the Solar System?
20
How would other planets in a solar system be affected by the disappearance of one planet?
6
Local terraforming
5
Viability of ballistically propelled "traveling salesman" space stations
8
Effects of Red Dwarf CME (Flare) on Biological Life and Atmosphere
6
Could a brown dwarf in our outer solar system remain undetected today?
4
Could co-orbital planets also be double planets?
10
Could 1950s technology detect / communicate with satellites in the solar system?
10
What kind of catastrophic phenomena could cause a solar system to be wiped out with little to no warning?