What kind of wing design would a quadruped with six wings need to fly well? [closed]

I had an idea for a leopard-like creature with six wings arranged along its back. How would the wings be designed to allow it to fly or avoid awkward situations like its wings getting caught on each other as they beat?

It's a predator so I was thinking it would need to fly fast, but I'm not sure how pointed wings would work with a six-winged creature or if they would help it go faster at all. It also lives in a forested area.

Another problem is that it needs to have relatively strong bones-rather than hollow bones like a bird's-to allow it to run and jump from high places without breaking its legs, which would make it heavier and therefore less likely to be able to fly with precision and agility. This means the wings might have to be quite large. On the other hand having six wings means it has more surface area to work with and since they move in a wave-like pattern this would mean they would almost constantly be pushing down. A little restructuring of the spine and other things might also need to happen. The only thing I want is just the kind of wing design that would fit it the best and that's it, it needs nothing more.

Note: Illustrations would be appreciated, but if you can't don't.

First of all: hollow bird bones are not weaker than "normal" ones, quite the contrary; no reason to stay away from them.

Falcons and condors have the kind of wings you need: relatively short but powerful, with several "improvements" (e.g.: separated primary feathers on wing tips) needed to make them almost as efficient in gliding as big seabirds (which have much more elongated wings).

A relatively nimble back would allow to use body torsion to improve maneuverability (forward and hind wings might be on quite distinct planes even while soaring).

The three wing-pairs would normally flap in wave to mitigate turbulence (hind wings would always be in turbulent air of forward ones); most likely the hind wings would be used for forward propulsion (i.e.: they would be flapping) while forward and middle would provide uplift.

Body needs quite a strong sternum keel to support flight muscles; this means legs should be rather long and in ventral position to allow easy grasping of prey. Talons are appropriate, but also a cat-like paw (with retractable nails) may be a good choice.

We will start with a clouded leopard. 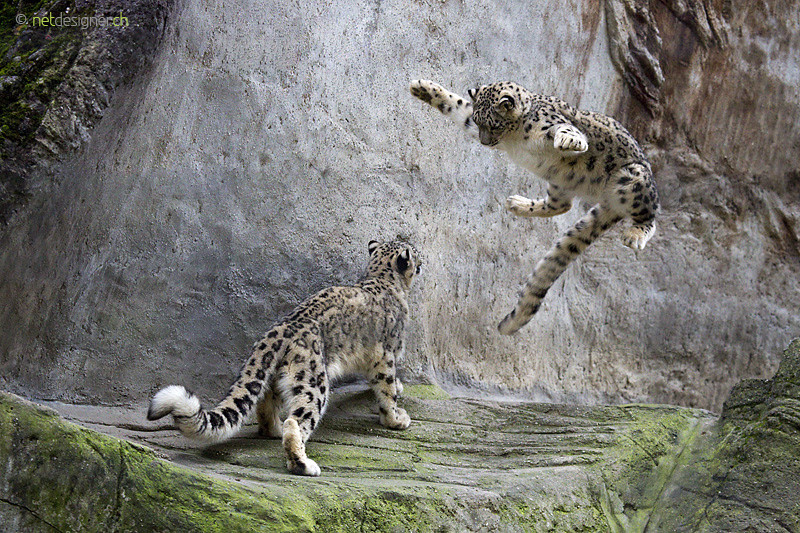 Clouded leopards are the most talented climbers among the cats. In captivity, they have been observed to climb down vertical tree trunks head first, and hang on to branches with their hind paws bent around branchings of tree limbs. They are capable of supination and can even hang down from branches only by bending their hind paws and their tail around them. When jumping down, they keep hanging on to a branch this way until the very last moment. They can climb on horizontal branches with their back to the ground, and in this position make short jumps forward. When balancing on thin branches, they use their long tails to steer.

This 6-wing cats ancestors were arboreal predators like the clouded leopard. Their attack was to jump from a tree, leading with either teeth (as the leopards do) or all four claws (like a strike of a hawk). The higher you start the more kinetic energy you have, which is important for a small bodied predator trying to incapacitate with one strike.

But as you start higher there is more room for error. Maneuverability would help.

One obvious set of wings would be the tail. Clouded leopards already use the tail for balance in the tree and it would make sense that a tail which could expand into a fanlike structure (1 "wing" on each side) would help steer in the air. Also tail structures are evolutionarily very flexible (so to speak...)

The body set is problematic for the same reason 6 winged tetrapods are always problematic. Tetra means 4 and the appendages are all committed in a cat. I am sure that this has been covered on world building before; links welcome.

We will side step this the same way the flying lizards have. 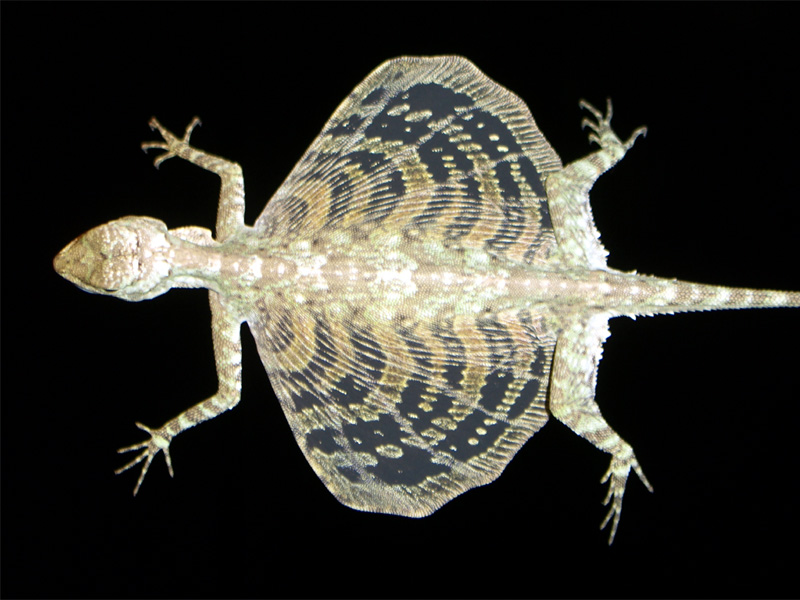 The flying lizard has 4 legs and 2 wings. These wings do not flap but are made from the ribs. These lizards glide. No doubt this arose from ancestors which could flatten their body in flight, increase wind resistance, and so control the speed and angle of descent.

Cats are not strangers to flattening their bodies while falling. 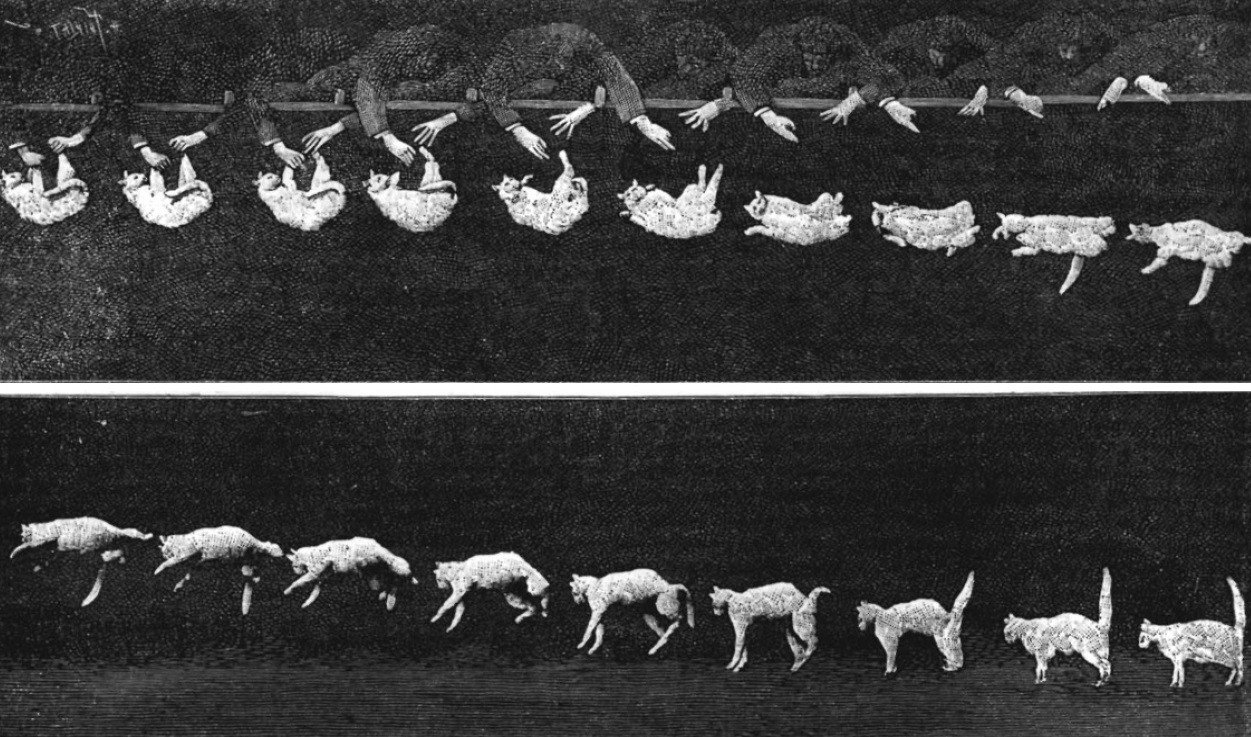 If a cat has time to orient itself in the air, it will flatten out while it falls, to slow its descent, then bring paws in for landing. I here assert that is what the snow leopard is doing in the top image.

The middle set of wings will be articulated ribs which expand out, flattening the body laterally into wings.

The last set will be on the head. Cats and mammals generally have evolutionary flexible ears. 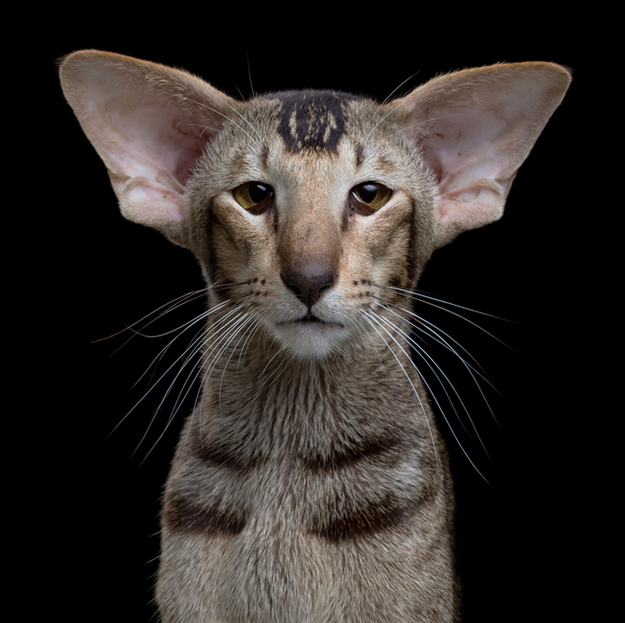 I have read that a problem cats have when they fall long distances is that they break their jaws and teeth. Their muscular legs can slow and absorb the impact but their weighty heads keep going and stop when they hit the ground. Wings 5 and 6 are modified ears which extend suddenly to slow the head if the attack jump misses and the cat is at risk for breaking its jaw.

So: a tetrapod with all 4 limbs the same as cat ancestors, and "wings" on tail, flanks and head. We will see if an image is forthcoming...

I would look at dragonflies and other multi-winged insects as a starting point for this, a basically rigid body with paired wings that can move independently, this will give you a fast and maneuverable creature that can stop on a dime and change direction at a whim. This also gives some ideas on body plan, with most of the body directly under the wing sets, especially the legs.

Not the answer you're looking for? Browse other questions tagged biology creature-design flight or ask your own question.

6
What would the changes necessary for powered flight using rib-derived “wings” look like?
10
Keratin wings: would they work?
2
How would a horse-like animal fly using artificially engineered wings?
18
Would an evolutionary predecessor for winged quadrupeds start with four legs and gain wings? Or start with two legs and wings and gain extra legs?
3
Humanoids with wings, how do they take off?
4
How Would a Six-Winged Angel Fly?