How could the earth produce more oxygen?

After the extinction of all humans and most large animals, what would be the most plausible explanation for arthropods to grow much larger like during the Carboniferous period? Then, the oxygen was much more plentiful due to a lack of decomposing bacteria, but what could cause an increase of atmospheric oxygen in the future to enable arthropods to grow substantially in size?

Enrich the ocean with iron

In sum: 70% of earth's oxygen come from photosynthesizes in the open ocean. Iron is scarce in the upper (sunlit) part of the open ocean. If iron is provided to regions of open ocean it can produce an algal bloom - in some experiments 30 times the normal algal growth blooms in the ocean.

The experiments to date have focused on the High Nitrate, Low Chlorophyll (HNLC) areas of the world’s oceans, primarily in the Subarctic, Equatorial Pacific and Southern Ocean. In general when light is abundant many researchers find that HNLC systems are Fe limited. The nature of this limitation is similar between regions but manifests itself at different levels of the trophic structure in some characteristic ways. In general, all members of the HNLC photosynthetic community are physiologically limited by iron availability. This observation is based primarily on the examination of the efficiency ofphotosystem II, the light harvesting reaction centers. At ambient levels of iron, light harvesting proceeds at sub-optimal rates. This has been attributed to the lack of iron dependent electron carrier proteins at low iron concentrations. When iron concentrations are increased by sub-nanomolar amounts,the efficiency of light harvesting rapidly increases to maximum levels. Using fast repetition rate fluorometry and non-heme iron proteins, researchers have described these observations in detail (Greene et al., 1991; Kolber et al., 1994; Behrenfeld et al., 1996; La Roche et al., 1996). What is notable about these results is that iron limitation seems to affect the photosynthetic energy conversion efficiency of even the smallest of phytoplankton (Cavender-Bares, et al., 1999).

Ocean blooms can happen for other reasons - most notably the oceanic "dead zones" caused by fertilizer runoff. The bloom of algae outgrow their nutrients and die, overwhelming the available population of decomposers. This leads to lower oxygen down lower in the water, where the dead stuff falls.

If the bloom could be sustained with nutrients (as one sometimes sees in eutrophic lakes inland) the oxygen it produces might also be sustained. How would the nutrients (iron, but also nitrogen and phosphorus) get out to the open ocean? Volcanoes spewing iron rich ash? Genetically engineer nitrogen fixers? Weird upwelling from the ocean floor? Hmmm.... 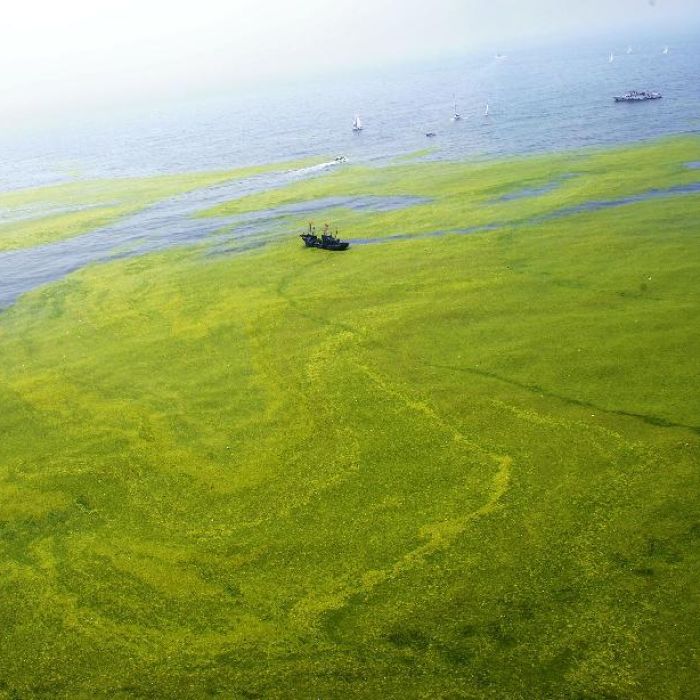 Will and Braydon have covered the terrestrial sources of oxygen, so I will just add extra-terrestrial oxygen to the arsenal.

When low density stars go into the red giant stage, much of their composition is oxygen. When such stars later die, their oxygen gets released as nebulae gases. A massive stream of such gases may be hurtling our way right now on a course which will intersect our planet just after the extinction of its human infestation.

Although much of that oxygen will be bound up in water molecules or disassociated as free atoms, a portion of that stream will probably be in the O2 molecule form which you are looking for.

More photosynthesis is the logical answer. The oxygen in Earth's atmosphere is the result of photosynthesis. So if plants could photosynthesize more then you would get more oxygen. You could also however increase oxygen by decreasing oxygen consumption from animals. If large areas of the planet were uninhabitable to animals but not plants (Radioactive maybe?) they would produce more oxygen, and animals in areas that are inhabited could have higher oxygen consumption.

You increase the overall amount of oxygen in the atmosphere by removing carbon from the atmospheric carbon cycle, and locking it away somewhere it cannot decay. Basically, you take living carbon and you turn it into rocks.

Equation 2: Organic carbon + O2 --> CO2 + H2O. This is respiration. Metabolism of both plants and animals, plus decay of any organic material. And burning of organic material in non-biological processes like forest fires.

Photosynthesis and respiration are generally in balance, so the amount of oxygen in the atmosphere and ocean stays pretty much the same: equation 2 is the exact reverse of equation 1.

However, if you can remove a chunk of the organic carbon component from Equation 1, it can't react with the oxygen in Equation 2. And you are therefore left with surplus oxygen. Over millions of years, this builds up in the atmosphere.

To do this you need to store the organic carbon somewhere that oxygen can't get at it. So for instance, in the coal forests of the Devonian and Carboniferous, the dead trees were rapidly buried in huge quantities in anoxic (oxygen-less) swamps, then sealed in by the sea periodically flooding in and dumping marine sediments on top. Alternatively, you could chop down the Amazon rain forest, tow the timber out to sea and sink it into a deep, dark ocean trench. Preferably an anoxic trench, so decay is really slow or halted.

The anoxia and slow decay can be a self fulfilling prophecy in some environments. If you dump tons of organic material somewhere like the coal swamp or the hypothetical ocean trench, the decaying material quickly uses up all the available oxygen, and the water becomes stagnant. Decay then slows, since anaerobic bacteria are less efficient at it. If the amount of decaying material is enough to use up all the 'oxygen substitutes' used by anaerobic bacteria as metabolites (iron, sulphur, etc), then decay will effectively cease.

Let's start with understanding what we breathe.

In a comment, @AlexP correctly points out that plants convert one molecule of oxygen for each molecule of carbon dioxide. If enough photosynthesis took place to keep CO2 at 0%, it would add only 0.04% to oxygen's existing 21%: an increase of a meaningless 0.2%.

Oxygen is 10,000 times more abundant in the earth than nitrogen, so why is there so much nitrogen in the atmosphere? Dr. Ken Rubin explains that Nitrogen is stable, meaning it doesn't react to much in the solid earth or in the atmosphere. Basically, there's not that much that will absorb it. Where almost everything will absorb oxygen. Take humans, for example. We need the oxygen we breathe. We don't need the nitrogen.

There are other ways to get nitrogen out of the air, but most require it to bond with the oxygen we want to leave behind. An example is limestone, which absorbs nitrogen dioxide.

The answer to your question: ammonia

An absolutely amazing article describes the ability to use a few chemicals, electricity, water, and air to create ammonia, which binds nitrogen to hydrogen. With a little handwavium (OK, scientifically it's a lot of handwavium, but still...) we ignore the handful of chemicals and suggest...

A change in solar radiation or the presence of a particle storm and the Earth's troposphere becomes electrically charged to a high degree. This makes thunderstorms not just common, but prolific, even ubiquitous. Since 2/3 of the earth's surface is ocean (and, electrically, it's better grounded than ground itself), most if not nearly all the lightning occurs over the ocean. Producing ammonia, and increasing the percentage of oxygen in the atmosphere, which means each breath you take is more efficient.

I'm going to ignore what the extra ammonia in seawater does to the sea. The reason for this is that what Earth has today is a natural balance and we're talking about changing that balance. Something in the ocean would need to absorb that ammonia to convert it to something less toxic for fish.

I'm also going to ignore the ionizing effects of lightning, which creates O3 (ozone) and nitrogen dioxide as byproducts. Have you ever heard the urban legend about margarine being toxic because it's only one molecule away from plastic (which is true, by the way)? Well, oxygen must be toxic, too, because it's just one atom away from ozone, which is toxic. I'm going to ignore this, too.

There is an upside to the lightning: NASA, to its surprise, discovered lightning produces more ozone and nitrogen dioxide in the upper atmosphere than humans do. So this solution would let us use CFCs in hairspray again. :-)

11
Big, big, big… beans
22
Is extending human gestation realistic or I should stick with 9 months?
10
Man-made mass extinction that benefits arthropods
12
How to evolve a reptile into a wyvern, 100 million years in the future?
7
Would Earth plants grow in an alien environment?
11
How Efficient Could Anaerobic Megafauna Be?
13
Mass extinction because of too low CO2-lewels
2
How Big Can An Land Arthropod Get In Our Modern Earth Climate
6
Semi-terrestrial/Amphibious Jellyfish?