What gases are made by a live, crackling, exposed electrical wire?

Are gases altered by live electricity, such as might be found along a humming electric fence? They could be formed directly or indirectly through effects on EM field, ionization, or hydrolysis - My sole question is whether the gaseous makeup of air is changed by electricity running along a wire.

This is world building because as civilizations acquire technological advancement the consequences of those advancements may impact the people. At least, I hope it counts as world building. I couldn't find an answer on google. There have been links between power lines and health, and I am trying to come up with a possible link on a foreign world.

On this foreign world, I need an electric fence to create a gas that is different in concentration from the surrounding air, by virtue of whether the fence is on or not.

Fence off = Air adjacent to fence is normal air.

Fence on = Air adjacent to fence has some difference in composition compared to 'normal air.' I realize 'normal air' is a bit silly as a phrase but hopefully you understand.

I have considerable discretion in the makeup of the atmosphere, but it is earth-similar as described in comments.

Hope this meets the criteria.

I've been mulling whether the local gaseous makeup of air is changed by electricity running along a wire. My previous question is on hold, and this one is different anyway.

I couldn't find exactly what I needed on google. The corona effect is close, but on my fictional world the composition of the air is much higher in oxygen. It's not earth. There are two suns, and solar output is weaker. The ice caps are enormous. Some of the help I received on the previous question suggested corona effect. That might work but doesn't really make carbon - containing gases.

The best gas for my world based on the inhabitants (which breathe oxygen but are more severely impacted by carbon monoxide) would be carbon monoxide. Combustion makes this, but not sure electrical arcing would.

Specifically, I need an electric fence to create a gas (CO ideally) that is different in concentration from the surrounding air, by virtue of whether the fence is on or not. I can work with other gases which is why I didn't constrain it before.

I've received tremendous input from the community on the meta forum. Thank you in advance for your help. I've really been struggling with this.

You guys are awesome.

The electric breakdown in air produces all sorts of radical, ions and some more stable compounds. The temperature created in the current flow during discharge can be quite high, high enough to scramble most gas molecules into all sorts of small pieces which recombine (or fall apart) into other species. I mean you can smell ozone around high voltage equipment - apparently you didn't know that. As for what specifically is formed, wow, that's a really hard question to answer. The more serious question is what is detected? (Because a chemical has to persist for "a while" to be detected, instead of only existing for an instant to have been "created"). What persists long enough to be detected depends on what is around. Especially important are pollutants like sulfur dioxide and organics. In pure humid air, you've got the obvious ions, and species like H2O2, NOx, O3. I wouldn't expect any NH3 (ammonia) but I wouldn't be too surprised if it was found, either. This may not seem related, but it is: did you know that you can detect x-ray emissions from Scotch Tape being pulled off of a surface when it's in a vacuum? (They don't detect it in air, not because it doesn't happen, but because the air absorbs the (faint) x-rays before they can be detected).

There's a LOT of chemistry that is going on all around us that is just happening too quickly for us to see. And of course if you're into scifi, you know about the experiments with lightning (arc discharge) making polymers which used to be the most popular explanation of how life originated on Earth. Electric discharge is actually NOT well understood. What we do know is that it is definitely powerful enough to make all sorts of (random) chemicals. They use electrical discharge to cut holes (with very precise dimensions) in thick, thick steel. It packs a wallop.

You need to differentiate between electrical discharge and electricity running through wires. Electrical discharging through an air gap (using the air as a conductor) certainly changes the air. Lightning is the prime example. (Florescent lights are another.) Ozone (a variation of the Oxygen molecule) is produced, along with anti-matter, and a whole host of other chemicals, depending on what is in the atmosphere. In fact, an electrical discharge can separate water into hydrogen and oxygen. The heat and energy given off can cause combustion of atmospheric gases. This can be as small as sparks given off by a poorly insulated conductor between the conductor and ground. This would be the 'sizzling' or 'sparking' sound. And no, there is no such thing as a 'perfect insulator'. There is always electron discharge from a conductor. See effects of lightning on the atmosphere

Depending on where ozone resides, it can protect or harm life on Earth. Most ozone resides in the stratosphere (a layer of atmosphere between 8 and 25 miles high), where it shields life on Earth from the sun's harmful ultraviolet radiation. At the surface, ozone is a harmful pollutant that causes damage to lung tissue and plants. In the tropopause (surface to 8 miles high) ozone also is a radiatively active gas that affects climate.

As for conduction through a wire, it depends on whether it is ac or dc. Our ac transmission lines 'hum' because of the continuing oscillation of the magnetic field around them, causing the wires to vibrate. Both ac and dc wires give off an electromagnetic field which can be detected. The dc field is constant, while the ac field is constantly switching polarity. Yes, these fields DO have an effect on polarized air particles. That is how electrostatic air filters work - they impart an electric charge on the particle, which is then attracted to the opposite charged collection plate. You can even get air currents circulating around an electric field, if enough air particles are ionized. Plasma jets are another example of particles in the air being influenced by magnetic fields and electricity. See link for example.

I remember visiting the Radio Canada transmission center in the Maritimes - the one that broadcast the radio signals into Eastern Europe and Russia. These transmissions were so powerful, that you could only be in the main transmission room for a very brief time. Otherwise, you suffered severe health effects. The guide brought in a florescent tube (that lit in her hand) to demonstrate how much energy was in the air. You could actually hear the broadcast, because the enormous energies involved turned every metallic magnetic object into a vibrating speaker. Even the air became a speaker.

The 'over the horizon' radar used on Canadian navy ships is so powerful that no crew member can be on deck when it is switched on.

You also have to consider capacitance. There is always some level of capacitance along any electrical conductor. The capacitance between water and the conductor in the cables that transverse the ocean between continents is a major factor in signal loss. But capacitance occurs in conductors that go through air as well. This capacitance effect 'locks in' ionized air particles to the conductor. Much more prevalent in dc than in ac transmission.

As an aside, the electrical field around a high transmission wire is enough to cause fluorescent lights to glow on their own, if brought close to the wire. Some farmers that are very close to high voltage lines have been known to light their barns just by puting a florescent tube in them. Unfortunately, there is no 'off' button.

Another reference you might want to investigate is coronal discharge.

In air, coronas generate gases such as ozone (O3) and nitric oxide (NO), and in turn nitrogen dioxide (NO2), and thus nitric acid (HNO3) if water vapor is present.

So in answer to your question, yes a sufficiently electrified world could create sufficient electrical discharge and EMF effects to effect a multitude of gasses around it, especially any gas that is or can be ionized.

Since you are speculating about an alien world, it will depend on the composition of the atmosphere. Arcing current on Earth should produce similar gasses to lightning, ozone and nitrogen oxides. So your arcing in an alien atmosphere would likely depend on the dominant gasses in the atmosphere. The other issue this raises, is that unless your alien planet did not have much lightning for whatever reason, it would take a lot of arcing electronics to surpass what is being naturally produced.

Did a little reading and I think what you're looking for is the corona effect.

This is caused when the voltage is high enough to cause ionization in the air surrounding the line, which is caused "by the discharge of energy that occurs when the electrical field strength on the conductor surface is greater than the 'breakdown strength' (the field intensity necessary to start a flow of electric current) of the air surrounding the conductor.". This would cause a humming noise, and possibly a bit of ozone at high enough voltages.

Edit:
Any time electricity is flowing you get at least a bit of EM field. The EM field is non-ionizing at the kind of wavelengths that are created with electricity, and so any ozone would probably be minimal compared to the corona effect.

Edit: (copied from other related question)
Since you are specifically looking for CO, and since it is specifically for one set of wires, and carbon monoxide is caused by burning something with carbon, then this set of wires could have a coating that is slowly burning when the power is on.
It could be an insulator that is just breaking down and buring under the very high current, or it could be some pollution that has built up on the wire that burns off when it is powered up. 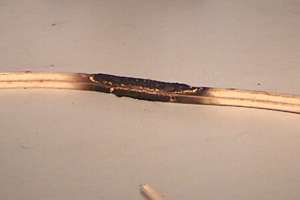 This would especially be true if there was a short somewhere along the line, which could cause the wire to heat up much higher than normal.

Not the answer you're looking for? Browse other questions tagged physics electricity or ask your own question.

-3
What conditions would cause electricity to create carbon monoxide?

1
Breathe in space, with or without a suit?
9
Magically knock someone down and pin them using Science
8
Semiliquid atmosphere - Is my premise/conclusions correct; and will it get the result I want?
8
Exoplanetary Review: Rock Storms
6
What ways are there to keep a steady altitude with large fluctuations regarding load?
6
Could there be an upside down hurricane on a gaseous super-Earth
0
Sky Train Blimp Plane?
48
How would you know your floating island was losing altitude?