Can the Iceworld civilization feed itself?

I have a world which is (nearly) a single-biome planet; it is mostly covered in shallow, ice-choked seas. There are few continents, but many archipelagos. Think northern Canada or Alaska as this planet's tropics.

Iceworld was not always this way. It used to be much warmer. In part to give somber historical depth, but also I needed to have land animals evolve. ;D

Here's my problem. I am not sure there is enough food available to support a human civilization. We have the following sources:

Even with all this, I'm not sure there's enough sustenance for to support a civilization. I want the main action to be in the bleak, bitter northern areas, not the soft tropics. The need is to support cities of at least 10,000 souls.

So, the actual question: How can I maximize the biomass in a high-arctic archipelago environment?

If you want your world to be earthlike you will have to go with the Inuit-type idea. I worry that hunting and fishing will not sustain a fixed population of 10,000.

A more exotic idea would be to farm. The sea floor. 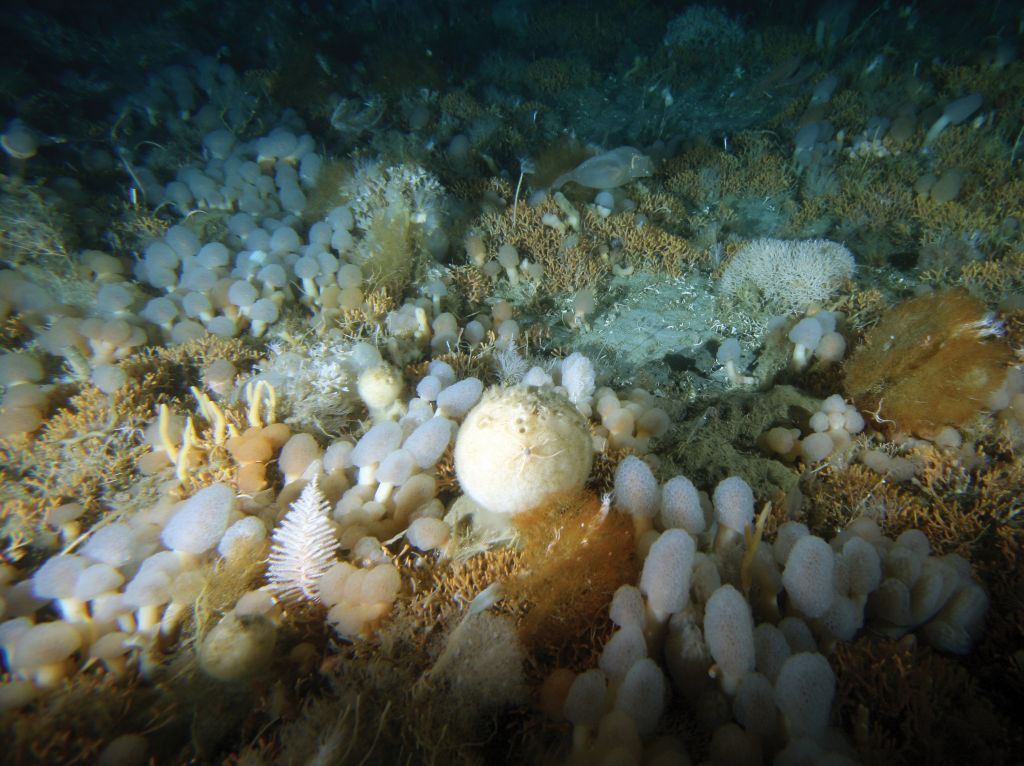 Apparently the cold, still dark is a good place for invertebrates. It is still unclear what they are eating. Chemosynthetic autotrophs from deeper? Ancient scum from the bottom of old ice? But they are down there and they get big.

At 230 feet, the limit of our dives, the diversity is greatest. We see gorgonian sea fans, shellfish, soft corals, sponges, small fishes—the colors and exuberance are reminiscent of tropical coral reefs. The fixed invertebrates in particular are enormous. Well adapted to a stable environment, these plantlike animals grow slowly but, it appears, without limit—unless something disturbs them

So: your society could have farms of delectable sponges, tunicates and sea cucumbers that they harvest through the ice, sight unseen from the sea floor. The waste of 10,000 humans is delicious fodder for these subsurface farms. And there are other things down there in the dark that sometimes come up with the harvest...

If it's ice down to the equator, it's going to be awfully solid from around 35 degrees poleward.

You can have an entire ecology that is dependent on the sea, but it will require that the seas be open for a reasonable part of the year. See the upwellings in the northern oceans, and around antarctica.

So now, you need to get ice on land, but open oceans.

Postulate a planet with less insolation than Earth, but a larger green house effect. (At times of very high CO2 levels Earth had palm trees in the high arctic, but only marginally warmer equatorial regions.)

So now you have a cooler world (further out) that is more evenly heated (thicker atmosphere) and more precipitation (more water vapour) This gives more snowfall on land. If what land areas there are are tall (lots of vulcanism -- which in turn keeps the CO2 high) then the land areas will be heavily glaciated.

Glaciar areas are reflective and stay cold. Seas are dark and stay warm -- at least liquid.

Colder sea temps will decrease evaporation. May not be consistent. You would never have a hurricane. Postulate more heat transfer by ocean currents. This can give 'hot spots' where agriculture on land is possible.

A crust/mantle rich in Potassium 40 would give a source of heat internal to the planet, as well as making it more volcanic.

Option: Equivalent of Norway: Forests, but not a long enough growing season for agriculture.

Option: Small islands would share in the heat of the ocean. Possible grazing. See Shetlands and Falkland islands for examples.

Remember: A world is a big place. There is room for a bunch of different biomes. One of the downsides of many SF worlds is their uniformity. From the one example we have (Earth) real inhabitable worlds have more variety.

That said, what we know of Venus is pretty uniform; Mars has some variation, but not huge amounts, and the moons of the gas giants have all sorts of weird geology, but not much range in climate.

I posit that a huge amount of the variation in earth is due to water being able to exist in all three states.

The inuit people have lived under similar conditions for hundreds of years. They are hunters and herders of caribou/reindeer.

I think you'll need to introduce a short summer because otherwise why would the animals migrate there?

The biggest problem is having permanent settlements. Herding/hunting means nomadic life at least part of the year.

You can introduce limited agriculture in greenhouses or make the settlements semi-permanent.

How about a few volcanic hot sea vents on the sea bed that provide a lot of very hot water which disperses to produce areas a few tens or hundreds of miles across where the conditions are a little warmer and life congregates around these warm oasis? The warm zones can be as big or small as you want depending on the size of the vents.

Yes. Of course, it depends on if the humans arrived from somewhere else. If they didn't, then they would have figured out a way to do it, like fishing. If not, this means that they could have brought some special yeast that grows really fast, and almost anywhere(But only in a place with a special requirement. Don't want it getting loose). If there's a collapse of civilization for them, they could also fish. Since this planet used to have a lot more land, there'd be a lot of free continental shelf space. That means that there would be a lot of sunlight available in these particular spots, which means lots of plants can grow, which means fish numbers can boom, etc.

In the end, fish are plentiful, and you can sustain civilizations with them.

Not the answer you're looking for? Browse other questions tagged reality-check biology ecology or ask your own question.

76
How can a pacifist country protect itself?
6
The westbird. Could this exist?
18
What measures might an ancient civilization take to protect itself from extreme heat?
4
Can Aspen forests have other species of tree present?
9
Realistic Alternatives to Dust: What Else Could Feed a Plankton Bloom?
7
How Would Weightless Creature Steer Itself In The Air? (Can It Sail?)
13
Mass extinction because of too low CO2-lewels
4
How long could this wildlife habitat sustain itself?
5
How to sustainably feed Las Vegas after the apocalypse?