Why would astronauts go to space to mine asteroids?

Realistically, if we are ever going to mine asteroids, it would be drones and robots that do it, not humans, because of safety and cost reasons. What reason could justify the participation of human astronaut in asteroid mining?

There are several possible reasons:

Your astronauts don't have to conduct the mining - they're just there to keep things running. They probably spend most of their time watching figures on screens, and only go out to the site when there's an issue.

An ideal mining crew would probably consist of a geologist, a couple of mining technicians, and someone who's good at remote piloting (for when moving things is required). They would all have medical training, and probably double up on some jobs.

They could also be clones. See the film Moon for inspiration.

People are cheap and people are desperate. 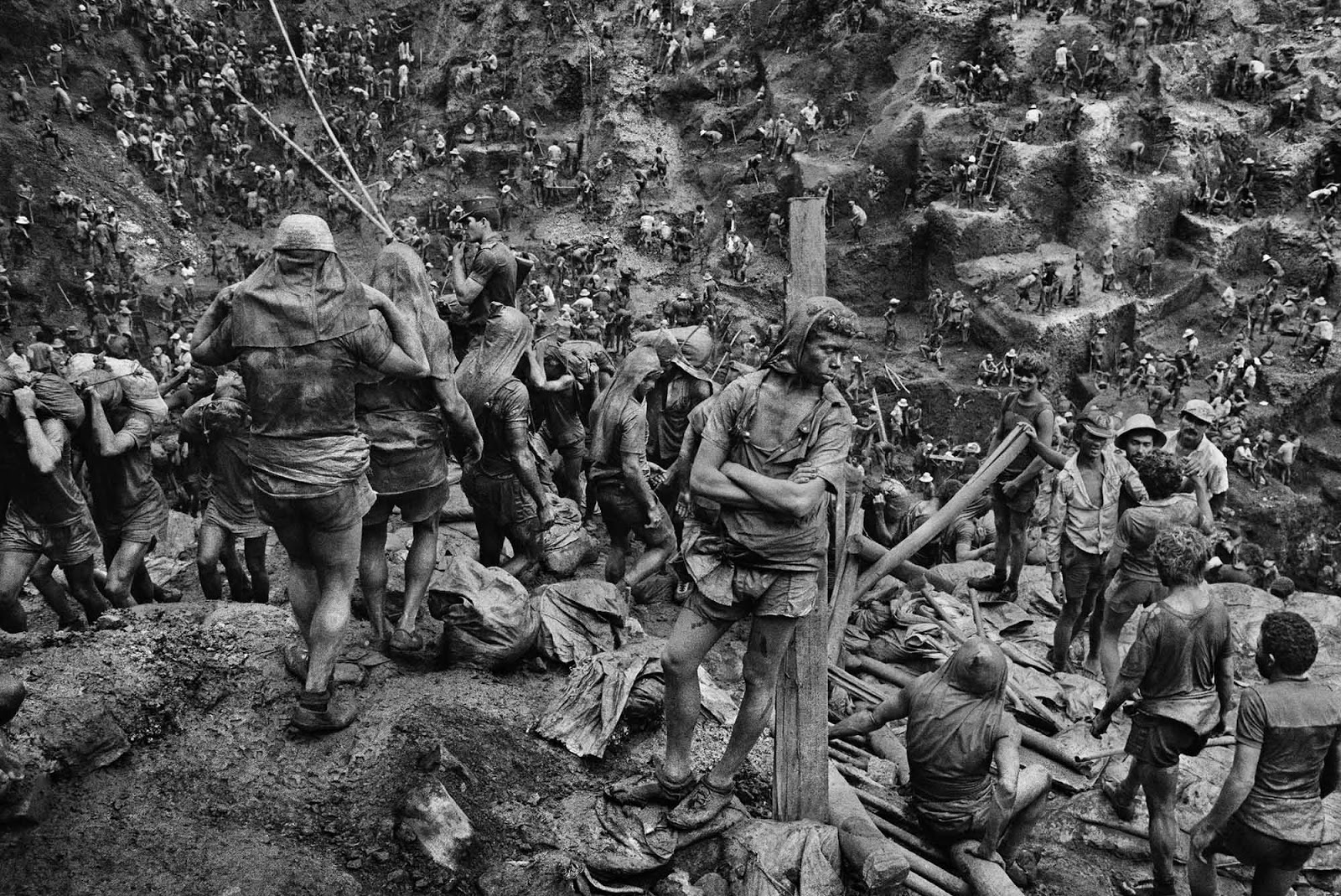 Here is the Serra Pelada gold mine in Brazil. Men paid their way to work there, working for themselves. At the maximum there were an estimated 100,000 men working this pit.

Miners would often pay exorbitant prices to have taxis drive them from the nearest town to the end of a dirt track; from there, they would walk the remaining distance—some 15 kilometres (9.3 mi) to the site. The growing town, since it could only be made of material that was carried in by hand, was a collection of haphazard shacks and tents.[2] Each miner had a claim 2 metres (6.6 ft) by 3 metres (9.8 ft). By May 1980 there were 4 000 such claims.[6]

Every time a section finds gold, the men who carry up the loads of mud and earth have, by law, the right to pick one of the sacks they brought out. And inside they may find fortune and freedom. So their lives are a delirious sequence of climbs down into the vast hold and climbs out to the edge of the mine, bearing a sack of earth and the hope of gold.

Your space miners are the same. They risk everything to get to the asteroids and work. Life is cheap in this future, and the miners risk theirs for the possibility of going home rich with the equivalent of a $100,000 gold nugget. It is less expensive for the owners to fit out miners with the bare minimum of needed equipment (or the miners bring their own) and send them into the asteroids than it is to maintain and repair robots.

This future also has potential narrative energy and violence: claim jumpers, rival mine gangs, crowded camps, dirty dealing by the owners, strange finds in the asteroids kept secret from the bosses.

The cost of a mining robot/drone is 10,000 futurebucks per robot, which need to be replaced every few months due to wear.

The cost of prisoners that are shipped to space to serve out their sentence is a one off fee of 100,000 futurebucks to your local Senator/Governor to approve the legislation.

1) Legislation against independent AI, due to fear of potential or historic events.

A very similar situation would be one where AI is not allowed direct physical control of objects.

In either event, machinery has to be controlled by people.

As remote-piloted machinery has too long a communications-lag (due to the limitation of the speed of light), the remote-pilots need to be within a few thousand miles of the work-site.

2) over-crowding on Earth, such that (at least some) people have had to move off-world. The costs of off-world life-support are already therefore being born. The marginal cost of having the life-support at a mining site as opposed to a nearby moon or space-station is low.

Maybe asteroids are considered to be owned by people who man them?

When you have unmanned stuff on asteroid, it is considered discarded property for anyone to take. But if you have an actual person, whatever they have under their boots is presumed theirs?

Why this arrangement might come to life: Imagine UN want to avoid the race to claim the bodies in Solar system without actually using them. So you can't claim rights to what you aren't using. It's easy to fake using with mechanisms, but with humans it's harder.

Whether humans go to space to mine rocks or not very much depends on the tech level of your setting. If we're talking near-future where space travel is expensive, ships are few and also expensive and travel is still fairly dangerous then the other answers have you covered.

However, if we're a little further ahead in the timeline and humanity has spread out among the planets, things are a bit different. There are billions of tons of asteroid out there, so many that it's functionally impossible to keep track of ownership and position of all but the largest. Once space-travel is cheap enough, freelance prospectors could pick out an asteroid, fly over there, mine the valuable bits and get out.

These would be small operations with little funding, almost like the gold minders in the old west, prospecting for platinum, lithium and other valuable metals. There would likely also be policing going on. However, stopping these small operations would be nigh-on impossible so long as they're profitable enough.
Note that I'm not suggesting that these operations would remain hidden for long. If your setting remains based in reality, tracking these questionably legal miners is going to be more than possible. The issue would not be finding them but getting a ship either out there to stop them in the act or arresting them when they try to unload their cargo in a busy port.

For an example of this, check out The Expanse (books or show, either one works)

As more and more jobs become automated, more and more people find themselves unable to find suitable work. The job they've been doing for 15 years is now done by a robot, and the jobs not done by robots require years of formal education - changing to those careers just isn't viable.

The government(s) step in: asteroid mining becomes a protected job, something that humans can do. Sure, a robot could do it... but we need SOMETHING for the masses to keep them occupied - otherwise they'll rebel. The best part is that the most likely candidates are also the ones who least fit in with the rest of society, and see this as a way to get away from others and have more personal freedom - just the type that would rebel in the first place.

As others have pointed out, this doesn't just open up mining, it also opens up a whole slew of related and supporting industries: supply run "truckers", fuel station attendants, restaurants, entertainment (of a wide variety), etc.

You've asked specifically for reasons to use people, but here are some thoughts on why NOT to use Robots:

Despite massive investment, robotics technology plateaus just above current level, i.e., not there yet. All promising research avenues fail to deliver. Robots cannot get a grip, cannot handle anything unexpected, and, more importantly, often get confused in the messy uncontrolled environment, even if everything else is as planned.

Space travel, on the other hand, advanced very, very fast, even relative to today's high expectations. Especially on the costs front.

I don't normally post here, but this one hits close to home. It's clearly a Union shop. While the work might be largely automated, somebody "must" be there for "safety" reasons. And of course, they need 3 shifts. And supervisors. And so on. That looks like a nice operation, you wouldn't want anything to happen to it. This might work well in a dystopian/dysfunctional future where everything is buried in bureaucracy ala Brazil (the film). Organized crime could be a more serious explanation.

Anybody driving through Massachusetts near roadway construction sees this overhead on a daily basis.

If the work is done by remote control, having human operators on-site would probably be preferable to long-distance control due to latency issues. A signal from Earth to Mars can take 20 minutes or more; asteroids in the asteroid belt are at least 6 times as far from Mars (300M km+) as Mars is from Earth (~50M km). If there's zero automation filling in the gaps then just a few seconds of latency could be disastrous.

Even if the work is entirely automated, it still probably needs to be monitored and managed by at least one human. Without a human present, problems will take at least as long as latency permits to hear about, and at least as long again to correct. If the automated system doesn't recognize a failure at all, then it might go unnoticed until the next shipment arrives, which will take orders of magnitude longer than a signal. If the system isn't equipped to correct a problem then you also have the time it takes to deploy a repair or recovery mission anyway.

Time is money. The cost of keeping skilled and well-equipped humans on-site is surely negligible in comparison to the expense of fixing problems and optimizing operation from a great distance.

Space ring! IE inexpensive ground to earth transit. A space ring is an orbital ring held up by a spinning chipper wire and the earth's magnetic field, and electro magnets.

It make so that you can launch ships from a closer earth orbit rather then from eartg, dramatically reducing required delta v.

This makes space flight cheap. Therefore sending men into space instead of mining probes is now feasible if men are better in someways than probes.

Next AI/automination has not progressed to the point whet the prove is variable of dealing with all of the unexpected happenings of the asteroid belt. A human is capable of far more improvisation, therefore they are better suited for mining.

13
Who should mine the Asteroids? Humans or Robots?

4
How practical is it to capture an asteroid?
13
Who should mine the Asteroids? Humans or Robots?
18
What would be the first thing humans would mine on Jupiter?
2
Mine easily turned into underground nuclear shelter / city
5
How would you realistically 'bump' a ship off of an Asteroid?
28
Why give an android emotions?
5
Would it make sense to mine/industrialize the planet Mercury with AI?