How many years would it take for a single tribe of about 10,000 related humans to become genetically diverse nations?

The situation is that an alien race transplanted a single tribe of about 10,000 primitive genetically homogeneous humans to a distant but livable planet. I want to know how much this initial population would genetically diverge over about 200,000 years as they grow from a stone age existence to an advanced civilization.

The issue is I'm not sure how to depict them. Would they still appear to be largely homogeneous because of the Founder Effect? Would the variations be relatively minor? Or would there be completely different geographical variations and nations who could no longer recognize each other?

Aha. I think I have it. And I think it is politically correct and biologically acceptable, huzzah!

"How long before two populations of people that, if genome-sequenced and subjected to NPMD, would form discrete (i.e. non overlapping) genetic groups."

Let's give those two groups a friendly name, like "Blossoms." These two blossoms originated from a single blossom. They can interbreed, but at the moment that we are observing this world, they isolate from one another and do not interbreed, by choice or force. << That's the question I am answering now. :-D

You need a few things to drive the establishment of different blossoms.

This is the most important feature, IMO, to drive the establishment of different blossoms.

So, if you devise an extreme scenario you can easily have as many different blossoms as you like - probably in a matter of 10 generations (at a guess.) On the other hand if everyone stays together geographically and culturally, and mates randomly, the population will remain homogenous.

Ethically, they'd be unrecognizable. The most interesting bit that you're leaving out is how biologically different they would be.

As for how they change over 200,000 years, they change completely. Again this is a 40 times longer window than it took for all of human history, you could fill buildings upon buildings with the record of how much they change.

You'll get lots of physical differences in your 200,000 years if your people spread out across the planet to live in different environments. For instance, body proportions: being fairly short and squat is a good body shape to have in a cold climate, because it minimises your surface area to volume ratio, and reduces heat loss. This is called Allen's Rule. So natural selection would favour short, chunky people in the Arctic or cold upland areas in mountain ranges. But you would find tall and skinny is good in hot climates where you want a large skin area to sweat from. Pale skinned people will get skin cancer a lot in the tropics, so any darker pigmented offspring will be favoured by natural selection.

Also there are bound to have been schisms in 200,000 years. One lot believe the aliens who brought them there were benevolent gods, another that they are devils. They spilt apart and develop separate cultures over the generations.

Given that the African diaspora occurred ~60K years ago, EVERY current human variation, ethnicity, and nation evolved in that time. Granted, early homo sapien tribes intermixed with the existing human like groups, but there was still a dominate species of human, originating from a small geographic area, that covered most of the planet in a relatively short period of time (20-30 millennia). 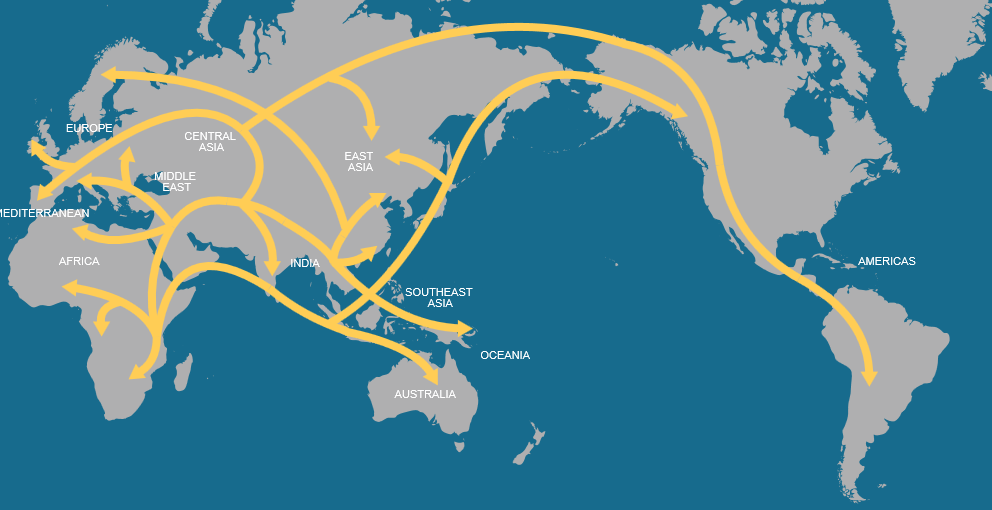 So your 10K transplants would have some challenges. For starters, what is the geography? Does it facilitate easy migration. Is there an ice age that opens up land bridges between islands/continents? Are serious macropredators limited enough for primitive man to cope? I doubt you could scoop up 10K folks from any Earth hunter-gatherer era and have them all consider themselves "one tribe", but genetically at least this may be true, especially if you pick a time right after a large scale global disaster that wiped out lots of other groups of humans. Right after, for example, the Toba supervolcano in 70,000 BCE that really culled the human diversity on the planet (more info on Toba) you could find spots that repopulated from just a few breeder pairs and would have a lot of genetic similarities.

Lack of any forerunner hominids to pass on skills/demonstrate how to live in a new area will slow expansion into new biomes. The variety of challenging environments will be one of the largest drivers for increased diversity/differentiation, especially for low tech humans that can't alter the planet to suit them. All of our instinctual knowledge will be wrong, it will take time to develop new ingrained responses for this new planet, passing on the information via epigenetics to offspring (if you ascribe to that theory) and redeveloping an oral tradition.

200K years, barring significant mass extinctions or harsh climate change, should be plenty of time for physically very different humans to develop, each with their own language roots and unique cultures. In fact, if they have fewer mass extinctions and the geography and native flora/fauna are agreeable, there is no reason why this hunter-gather group couldn't develop agriculture, domesticated animals, and eventually advanced technology much faster than humans did on earth, so your group could be space faring themselves in just 10-15K years! For all of it's flaws, Jared Diamonds Guns' Germs, and Steel can give you ideas on how to craft a world to accelerate or retard human development.

Consider the Polynesians. It's generally thought that they started spreading from Taiwan roughly 4000-5000 years ago, and by 1000 A.D. they had spread to many diverse cultures and populations across the various Pacific islands. That an other historical records show that humanity spread and diversified quite quickly.

Not the answer you're looking for? Browse other questions tagged science-based evolution space-colonization or ask your own question.

4
How would evolution shape humans for life in zero-G?
3
Evolving an intelligent avian race with a human-like appearance
7
How long would it take for humans to develop “tails” for use in water by evolution?
2
How diverse could humans become from living on different planets?
6
How long would it take for another species to help primitive humans evolve?
30
How much smarter would bred humans become?
5
How would Humans change, or evolve, to being Domed for many thousands of years?