Similar to other suggested dynamic structures using kinetic energy to provide structural support, I am considering options for resisting external pressure in a vessel (e.g. a diving bell) by incorporating magnetically supported rotating hoops into the hull. The principle would be similar to an orbital ring but at a much smaller scale, with the force resisting external pressure rather than gravity. 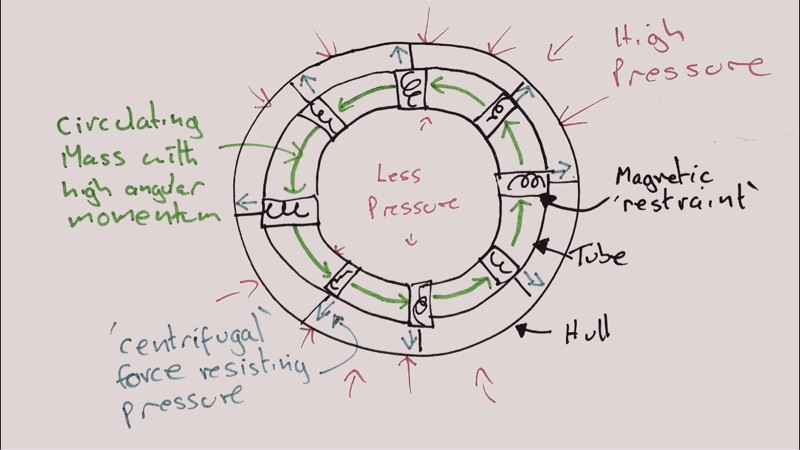 I am pondering Options for the circulating mass with angular momentum which will generate the centrifugal pseudo force:

Question 1: do you see any fundamental - show stopper - reasons this idea could not work (in a Hard SciFi context respecting the laws of physics)?

Question 2: which if any of the materials are suitable? (My preference for narrative reasons would be 4. then 3. then 2.).

Ah yes! This brings back memories. It's our old friend the centrifugal submarine. Originally discovered while digging back through very early issues of New Scientist, probably first published in 1964 or 1965, and appeared in the magazine's humorous science column. Each week New Scientist published fabulous invention after fabulous invention devised by a wonderfully creative scientist under the pseudonym of Daedalus. Daedalus was named after the Daedalus of ancient Greek myth and legend, who was a epitome of the creative inventor-scientist. Despite minor setbacks like wings used by Icarus to fly. OK so wax melts, but that's only due to the lack of suitable fabrication materials.

The man behind the Daedalus pseudonym was David EH Jones, a chemist, who consistently devised wacky contraption after wacky contraption for weekly publication. The contraptions were usually based on a seemingly plausible application of a physical, mechanical or chemical principle. Jones conceded there was often a flaw in the reasoning that made his contraptions impossible, impracticable or dangerous to use.

Daedalus and his fictional company, Dreadco (Daedalus Research Evaluation and Development Corp), set out, like many scientists, to trace the consequences of a “what if” idea. The difference for Daedalus was that he built in an intentional flaw. While professional scientists find all too often that their ideas fail, Daedalus anticipated failure but instead sometimes found that his ideas succeeded. In 1966, he proposed to make hollow molecular balls by persuading sheets of graphite to close up (graphite is composed of sheets of carbon atoms arranged like chicken wire). In 1985, Harry Kroto, Robert Curl and Rick Smalley described just such a molecule, carbon-60 (now known as a buckminsterfullerene), for which they received the Nobel prize in 1996. A mutual friend pointed out the Daedalus column to Kroto, who acknowledged it in his Nobel lecture.

After a long run of publishing in New Scientist for 24 years Daedalus (Jones) was poached by Nature and The Guardian where he continued until 2000 when he retired Daedalus due to a stroke.

Daedalus proposed that a submersible vessel instead of relying upon a heavy and sturdy hull to protect itself from the external pressures of the deeps could make use of centrifugal force to supply the dynamic counter-pressure. This proposal suggested that the liquid metal mercury would be the suitable circulatory mass to apply the centrifugal force necessary to support the hull of the submersible. Mercury would be a better choice than the suggested (a) Hoops of copper, (b) Hot Plasma, (c) Cold superfluid, or (d) Bose Einstein Condensate. It is readily available material and at a reasonable cost. Also, it wouldn't present insuperable problems managing it. Hot plasma or superfluids, oh no! Too many problems dealing with them under normal temperatures and pressures even in a diving bell at great depth.

The proposed rotating mechanism for dynamic structural diving bell sensibly keeps the cabinet where the crew and personnel would be located separate from the external spinning structure. Its main disadvantage would be the need for continuous power to maintain the centrifugal mechanism. The slightest power or engine failure could lead to rapid catastrophic failure. Something best avoided.

Toby Weston, sir, it is my sad duty to report that Daedalus (David EH Jones) published first and any patent disputes will need to be resolved in court. This would not the first time one of Daedalus' contrivances turned out to a workable invention nor will be the last.

In summary, it is recommended you consider the suitability of the mercury-filled centrifugal submersible as devised by Daedalus in the 1960s, only now is science and technology catching up with his genius, as the template for your dynamic structural diving bell.

IN MEMORIAM: David Edward Hugh Jones, scientist and writer, born 20 April 1938; died 19 July 2017. A creative mind who will be sorely missed by all those who love exploring the consequences of "what if" ideas.

Is there any fundamental--show stopper--reasons this idea could not work (in a Hard SciFi context respecting the laws of physics)?

No. It's a perfectly fine idea.

Which materials are suitable?

If you can use a superfluid, then a lot of engineering problems get a lot easier. The whole point of superfluids is that they flow with zero viscosity, so once you get it rotating in the pipes, it'll just keep going, with no need for magnetic confinement or replacement of frictional losses. On the other hand, you now need a really good refrigeration system, and there is the question of how you get it started moving in the first place. There are certainly ways to do it; it's just not obvious what the most practical engineering solution would be.

In an SF context, you could always make up some new exotic superfluid material to use for this purpose. If we're sticking with known, real materials, however, the superfluid option is going to require helium (probably helium 4, since it's much more common and transitions to the superfluid state at a higher temperature than He3). Superfluid helium is also a Bose-Einstein Condensate, so there's you top-two choices already taken care of. The fact that it is a BEC is, however, not really relevant; yes, its BEC nature is part of the explanation for why it becomes superfluid, but your engineers won't need to care about that. All that matters to them is that it is, in fact, superfluid. Bose-Einstein Condensates do not generically lend themselves to this application.

Using hot plasma is a bad idea. It's incredibly difficult to control, and you'll want something with a relatively high density to provide the maximum counter-force.

Copper would work, making use of its diamagnetic properties to "levitate", pushing against permanent-magnetic bearings in the outer wall. It's far from the best solid material you could use for this purpose, however. You wouldn't want to use just a continuous band of copper; it would need to be broken up to minimize induction of eddy currents, which will sap energy and momentum from the system. Rings of bismuth and/or pyrolytic carbon would be much more effective, as they are much stronger diamagnets. Unlike the superfluid option, which can just use regular ol' static pipes to circulate the fluid in, using solid rings like this would require some kind of active support; the main load-bearing elements could be simple permanent magnets, but you'll also need an electromagnet, or air cushion bearings, or some other control system with extremely fast response times to make sure they remain in their tracks. If that fails, your pressure vessel gets rather violently torn apart.

The upside of this sort of system is that, while there are some significant system control issues to solve, the basics of how to build and supply power to the system, and rev it up and down, are much more straightforward, and the materials are cheap.

Not the answer you're looking for? Browse other questions tagged reality-check science-fiction orbital-mechanics or ask your own question.

6
Wing-design for a Bird that Needs No Lift
2
An idea for a society's unique electricity and how it works
8
Feasibility Check- Is aquaculture a possible food source for my civilization
1
Reality Check: Is This Habitable Long Term for Humans
6
What design considerations would there be for a space ship using low-tech bioregenerative advanced life support and propulsions systems?
2
Gigantic laser facility with dyson-like reflector network as defensive system. Is it a good idea for my setting?
2
What Practical Reasons May Encourage an Empire to Build a War Academy Campus in a Fortress or Structure that can be mobilized for War
4
Realistic spinal structure for large headed aliens?