What is the largest / longest practical bronze age sword possible?

Assuming bronze age technology and the use of bronze for the blade, what is the longest blade / total length of sword that is possible and practical to use?

Bronze age Naue II swords were typically 70cm but I am wondering if a longer (1.2m +) sword is actually practical, both in terms of weight and strength of the material

Are there any technologies available today (or in a future sci fi setting) that could improve the possible sword length in a bronze material?

John: total length, probably quite a lot of handle!

Erik: cutting slashing at a large opponent such as a 300kg Troll

The use of bronze instead of copper meant that these swords could be fashioned in the range of 20—35 inches in length. Longer, sturdier swords in the range of 2—4 feet, however, would not emerge until the the Iron Age, beginning around the 13th or 12th century BC.

So you can have a 3ft sword of bronze, but that's at the very upper end of the scale. It'd be a high-tin bronze, very expensive, and probably a "named" sword.

From other sources, I'm told that bronze alloys using a lot of tin are actually quite competitive with iron (not steel, though). The big issue was that iron is way more abundant than tin. What this means however is that early iron age swords would be short, too. The more "steely" the iron gets, the longer the sword can be.

Were I a Bronze Age guy with trolls to fight, I'd consider packing a brace of spears instead, or maybe an axe. The wood gives me length and leverage, and the metal gives me bite. Do note that in the Iliad, the bronze-age Achaeans (cough cough, "akaioi" if you will ;D ) were all about the spears. Swords were the backup weapon.

bronze swords up to 110cm exist(Chinese Qin Dynasty), although 80cm is considered close to the max for a practical sword. 70cm is a fairly normal bronze longsword but not the maximum. For instance many Naue II bronze swords were 85cm. Single edged swords got even bigger, note longer swords like this would have had a tang of some kind.

Here is a website dedicated to bronze swords for design ideas.

Bronze swords are actually fairly durable, they bend instead of breaking which means they can be fixed more easily and much faster. A steel sword is better and more importantly stiffer, bending will be your biggest problem bronze.

here is a great video of destructive testing of a bronze sword.

During the Bronze age, relatively long, narrow swords were made as thrusting weapons, presumably to get around tower shields or full suites of armour and stab your enemy in the neck area for an almost certain killing stroke. Since the Bronze age covers a long period of time, a good summary of sword evolution can be found here

Reproduction of the Dendra armour panalopy 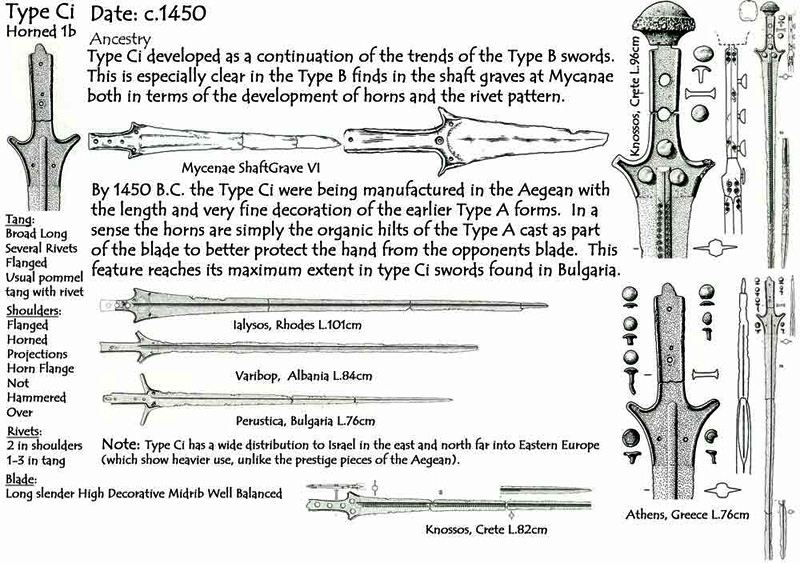 The long thrusting swords are perhaps some of the earliest ones, often catalogued as type "A" and "C". Some examples of "A" swords are up to 87cm long, while there is one example of a "C" sword 101 cm long. Most swords are shorter (perhaps to ensure they don't bend or break when thrusting). Naue II swords were optimized for cutting and thrusting and could be up to 85cm in length although most were shorter, suggesting 85cm was the practical limit for bronze swords.

It should be noted that while swords were considered the sorts of weapons nobles and other wealthy people could carry into battle, most people fought with spears, and closed with daggers or axes. This is because they were generally less expensive, and didn't require the length of training a sword would take (particularly a long thrusting sword. While no ancient texts exist to understand swordsmanship in the bronze age, sword manuals from the 1500's for rapiers suggest it would probably have been rather complex to learn).

Others have commented on the practical lengths of a bronze sword based on it's material.

You mentioned that this was a world that has magic. So, that opens up some possibilities that our world didn't have.

Casting a sword is a job that requires skills, and same does waving it around.

If the craftsmen of Bronze age didn't produce swords longer than 70 cm (and I am pretty sure nobody is glad to fight for his life having a too short sword, therefore the requirement to have the sword as long as possible were in place) it surely means it is either not possible, as the material will be too defective to be effective, or not practical, as the sword will be more a burden than a treat in the hands of a warrior.

Composite materials (fibers in metal matrix) may help in improving the sword resistance while keeping the same weight, but then the challenge would be to have a well balanced sword.

Bronze was very expensive which is what probably limit the length of swords made with it. Otherwise, it's properties are pretty much inline with the larger iron swords that came later.

The other thing is that metal armor was also not too common in the bronze age because of the cost so that you don't need a massive sword to do damage. If you needed longer reach, a spear would do. So there is less need of more massive swords. Massive swords aren't actually good against agile opponents in light armor.

Not the answer you're looking for? Browse other questions tagged materials ancient-history metalworking or ask your own question.

1
What Alloys would be practical for making a sword that melts through things
12
Present time travelers in bronze age - how much could they boost technological development?
30
What is the hardest wood possible, and where would this be a practical material?
3
What is the longest something could hibernate?
7
How to build the largest possible zeppelin with ancient tech?
14
Naval warfare in a Bronze Age setting - few big ships versus many smaller ships
10
Reality Check: Discovery of Iron Bloomery without a preceding Bronze Age?
15
What tool would a Roman-age civilization have for the breaking of silver and other metals into dust?
10
The limitations of Bronze firearms