I'm interested in the viability of the following scheme for (relatively) fast space commerce within the Solar System:

This way "reaction mass" is the cargo and space station will increase speed up to a maximum given by maximum speed attainable by ground station accelerators:

How much is such a system viable with not-too-far future technology (at least permanent space bases should be available).

You are actually proposing a modified version of the "Aldrin Cycler", which is essentially a space station moving in a continuous orbit between the Earth and Mars. The primary advantage is the cycler can be massive enough to carry heavy radiation shielding, life support systems (like hydroponic farms) and other heavy equipment which would require a lot of energy to accelerate or decelerate.

Getting to and from the cycler is relatively easy, a small, light spaceship accelerated hard from Earth our Mars to catch up to the cycler, while other small, light spacecraft decelerate to enter Earth or Mars orbit. Since the ships don't have to carry lots of radiation shielding, life support or even supplies for more than a few days, they can be much smaller and lighter than a sip designed to go all the way between Earth and Mars.

Once you read the description, you realize the difference between the Cycler and the OP's proposal. Since the OP wants to catch and deliver cargo pods by accelerating or decelerating them agains the ship, the Cycler's orbit will be changed, while the original Aldrin proposal uses self propelled rockets to make the trip, hence little or no transfer of momentum to the cycler. 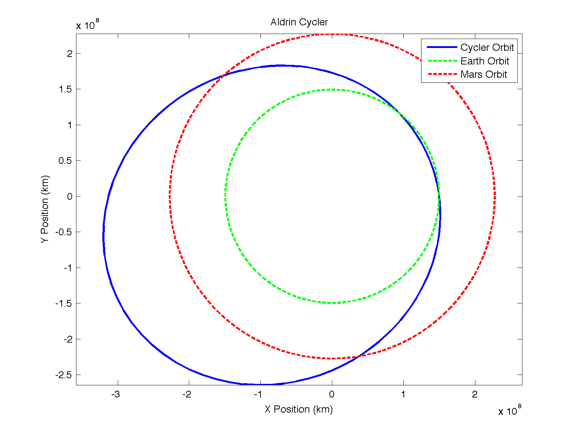 Orbital path of a cycler

So as a first pass, a simple cycler using shuttles to take on or deliver cargo at Earth and Mars would work.

The OP's proposal could work, however, given some very stringent conditions. By catching items shot from the Earth or Mars, the spaceship is essentially operating a "Hybrid mass driver", so the ship can gain or lose energy by catching and delivering mass from fixed points on the Earth and Mars. The cycler needs to follow a very carefully plotted orbit in order to maintain its path between the planets, so the amount of energy (mass X velocity^2) either being received by the cycler or delivered in the form of packages needs to be strictly limited to amounts which do not adversely change the orbital parameters. As well, the cycler must balance the receipt and expenditure of energy (taking losses into account) in order to prevent long term disturbances in its orbital path. In other words, if a Martian cancels their order from Amazon.earth, they will still get their package regardless. Failure to balance the inflow and outflow of mass and energy will rapidly throw the cycler off of its orbit.

Ignoring the details and oversimplifying for a moment, if you want a space station of mass M to move at velocity V then you need to ship cargo of mass M at velocity 2V to make up for the fact that upon catching the cargo you just doubled the mass. As the mass of cargo decreases, the shipment velocity must increase to accomodate the difference. Basically, if you ship cargo of mass 0.05M (5% of the station mass) then you must send it with a velocity of 21V (remember, I'm really simplifying the math. Our contributing physicists are probably choking on their after-dinner mints right now. But this is the basics of non-elastic collisions, as I recall from my decades-old college memories.). My point is, if you want to move a space station from Earth to Mars in a reasonalble time (like, a month), the force required to ship cargo to produce that acceleration (ignoring how you'd catch it) would leave a flaming streak through the atmosphere and the object caught would be a stream of carbon dust.

Making the matter worse, there is always a loss of energy when transforming one kind of energy into another. Let's assume you're using rail-gun style technology to accelerate a canister, the contents of which are your cargo. Electricity is used to generate magnetism (lost energy) which generates kinetic force (lost energy) which must overcome atmospheric conditions (lost energy) until it gets into space. Your space station cannot simply "catch" the bullet as the force involved would tear the station apart ... so we're creating an inverse magnetic field to convert the kinetic energy back into electricity (loss + loss). It's that new electricity that's being used to provide propulsion for the station (unless we use unobtanium to catch the bullet... but the contents are powder after the catch...).

Granted, the space station can use orbital and even atmospheric braking to actually enter orbit around a planet, reducing the need to use the accelerators for braking maneuvers, but I don't think that makes the solution viable enough.

So, using cargo shipments to contribute to the energy/fuel efficiency of the space stations is a great idea — but by themselves, the shipments either (a) cannot efficiently produce the energy necessary to move the station or (b) are doing so with so much energy loss that it would be economically more efficient to put an engine on the station.

In the end, while I adore the idea of travelling salesmen in ambulatory space stations, I'm afraid I must conclude that the propulsion solution is not viable. However, I'd keep the idea for moving cargo... you just need to add engines to the space stations. And you could use linear accelerators planetside and loop accelerators (like partical colliders) on the stations to tranship the cargo.

Dang! I love the idea!

Not the answer you're looking for? Browse other questions tagged science-based space-travel orbital-mechanics solar-system or ask your own question.

18
Runaway Starship Ramps
56
Is space piracy orbitally practical?
23
How can I prevent Kessler Syndrome among space stations?
3
How could Earth be propelled into a further orbit?
9
The viability of a skintight space suit
18
How to make classical firearms effective on space habitats despite the coriolis effect?
10
Relativistic Interstellar Combat