I would love to inject this trait into my world's creature(s).

Edit Duplicate Question: Doesn't have anything to do with "Other blood colors". I'm asking about bile blood's potential physiological drawbacks (since nearly everything in biology is a trade) and the possibility of other blood-born defense mechanisms. The fact that the blood is green is just a side-note.

It is funny you should bring up the prospect of high levels of biliverdin. I mooted that prospect in this question just a few days ago. Little Green EARTH Men?

As far as I can tell biliverdin is not toxic. Even bilirubin is not super toxic - people tolerate chronic low levels well. People who are sick with yellow or green jaundice are sick because of the liver dysfunction, not the bilirubin / biliverdin itself. Very high levels make you itchy and can cause kernicterus in newborns. As you note your lizards and some other vertebrates have high levels of biliverdin in the blood. It may act as a free radical scavenger.

It occurred to me that a group of people who underwent evolutionary selection for very pale skin might derive benefit for high biliverdin levels as regards protection from UV light. Although they would then be green, which might make it hard to get a date. And also, circumstances (cold weather / short days) favoring very pale skin also favor lots of clothes.

But high biliverdin: yes, definitely. I was not able to find any pictures of people with green jaundice from his biliverdin. I did find these pictures of milk, serum and urine from a case report of two ladies with mutations that caused accumulation of biliverdin during episodes of liver trouble (but apparently not at baseline). Interestingly both ladies were Greenland Inuit. 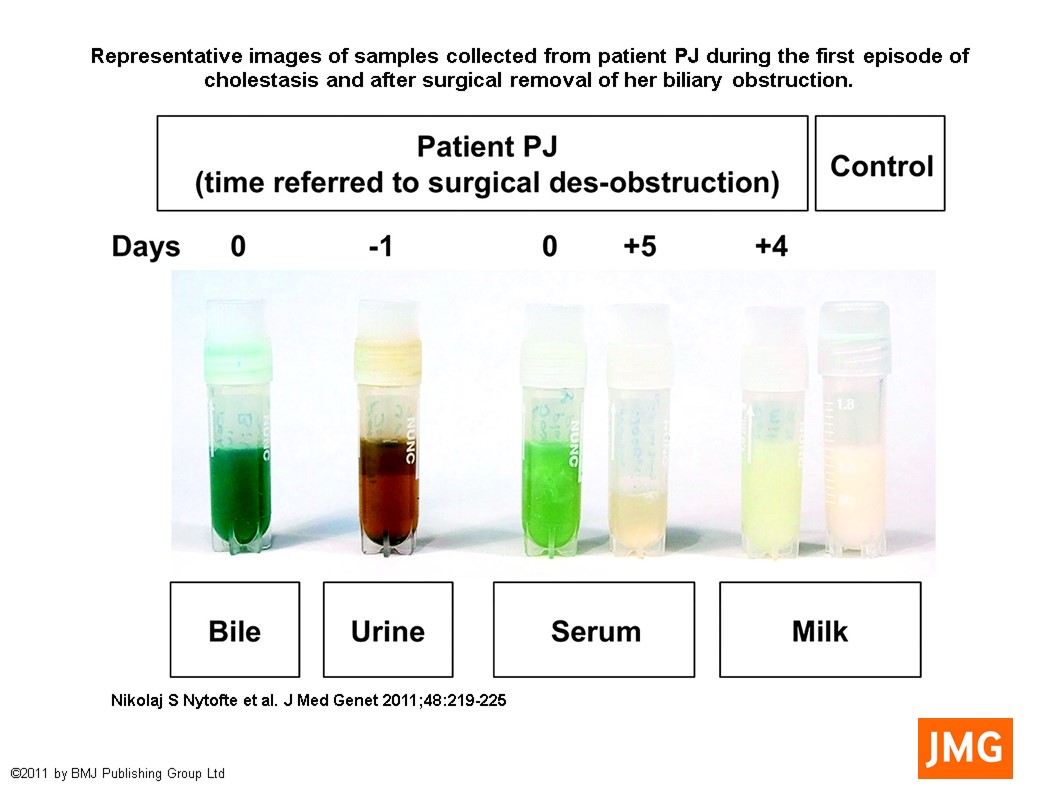 If you're running a reasonably science-based world, with fairly robust evolutionary processes, you can figure that most of the creatures are going to wind up pretty well-tuned evolutionarily. Evolution is really good at tuning and tweaking. At that level, then, all things are tradeoffs. If you have blood that is tuned for being toxic, then it's likely going to lose something in carrying oxygen, immune system, or whatever. Likewise, you're going to have to make the rest of your body able to function in a stew of the stuff, which means biochemical alterations (with their own costs).

Now, this is probably not worth it for a sapient species overall. Special-use answers like this generally won't be. Sapience offers an answer that is at least as good as poison blood, and has a notable metabolic cost of its own. Unless there was some driver actively forcing them to remain that way, their blood would likely become less billious over time after a sufficient level of sentience had been achieved.

...of course, there are all sorts of ways to justify it. In particular, if someone else is uplifting these creatures... well, humanity makes a lot of compromises to things like calorie-efficiency that we don't really need as much anymore (or at least, not in the developed world). Alternately, if they had some strong continuing reason to need that sort of blood even after they got intellect, it could still be maintained naturally. It's just that justifying it is going to take a bit of work.

As far as I can tell, biliverdin is only toxic in very high levels. It's a byproduct of breaking down heme, and will usually break down into bilirubin unless it has been oxidized. I would guess that either you would need more oxygen to maintain the biliverdin,a higher red blood cell count, or modifications to the liver itself.

As to why it's toxic in high levels, Kernicterus is a form of brain damage caused by high levels of bilirubin accumulating in the grey matter. According to the Wikipedia article (https://en.m.wikipedia.org/wiki/Kernicterus) this is commonly seen in infants, possibly because of the less developed blood-brain barrier. It could likely be circumvented by preventing the breaking down of biliverdin to bilirubin in the bloodstream, or by strengthening the blood-brain barrier.

63
Other blood colors
5
Natural blood fountains
61
How does the Booze-Rat fuel its defensive mechanism?
11
How did the Booze-Rat evolve its defensive mechanism?
11
Dragon's Blood - If it was a realistic animal what would be the color of its blood?
4
Defensive adaptations for lagomorphs
13
Liquid nitrogen blood?
3
Could a species evolve a defensive ability to excrete a super acid?
2
If an ET has caramel blood, what it implies?