How could the amount (total mass) of oxygen be increased on a planet like Earth (with a similar atmospheric composition), preferably by natural processes?

For the sake of having a ballpark number, let's try to increase oxygen by 5% of the current mass of the atmosphere.

Oxygen is one of the most electronegative atoms. This means it easily oxidize other atoms forming compounds known as oxides, which remove oxygen from the atmosphere.

On the other hand, oxygen is released in the atmosphere as byproduct of photosynthesis, upon intake of carbon dioxide from the same atmosphere. The balance of these two processes keeps the atmospheric concentration of oxygen at about a constant level.

Now, if you want to increase the oxygen content in the atmosphere, you have to alter the balance mentioned above. Thus you can:

Oceanic cyanobacteria, which evolved into multicellular forms more than 2.3 billion years ago (approximately 200 million years before the GOE), are believed to have become the first microbes to produce oxygen by photosynthesis. Before the GOE, any free oxygen they produced was chemically captured by dissolved iron or organic matter. The GOE was the point in time when these oxygen sinks became saturated, at which point oxygen, produced by the cyanobacteria, was free to escape into the atmosphere.

An alien (or bioengineered) microbe capable of catalyticially electrolyzing water to hydrogen and oxygen gets established in the deep ocean. Hydrogen stripped from water molecules is used to reduce carbon molecules for energy, generating long chain alkanes (which is energetically unfavorable in an oxidizing environment but no doubt happens in anoxic reducing environments). These fictional creatures want the hydrogen; the oxygen is a toxic waste byproduct and is allowed to bubble up and away.

The growing and unsuspected population of these organisms causes an increase in oceanic and thus atmospheric oxygen at the expense of liquid water, which is so abundant no-one misses it.

Law of Conservation of Mass:

In a closed system matter can neither be created or destroyed.

So there is no natural process that would increase the "mass" of oxygen on a planet. Except for the natural way that any matter increases on a planet:

Meteors made mostly of oxygen: 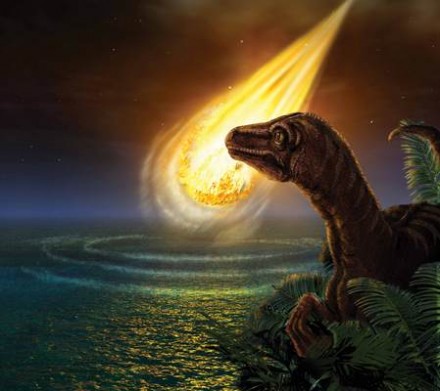 If you meant increase the amount of oxygen in the atmosphere then photosynthesizing organisms would do the trick.

Without photosynthesizing organisms though, oxygen becomes very difficult to occur naturally in large quantities in the atmosphere. This is because it's relatively a reactive molecule.

Follow in the footsteps of the first alchemist, Ernest Rutherford.

Rutherford changed Nitrogen in Oxygen by bombarding nitrogen with Alpha particles. However, you will need a truly monumental amount of alpha particles to make a measurable difference in Oxygen. On the plus side, you won't miss the nitrogen you convert. Since this is really difficult perhaps you might like other solutions ...

You could take oxygen from the Sun. Oxygen is about 0.78% of the sun, but the sun is so massive, that the sun's oxygen outmasses the earth. Still very, very difficult.

Siphon off carbon dioxide and/or sulphur dioxide from Venus and leave the non-oxygen atoms behind. You need to really improve space travel, but this is more practical.

Refine a large amount of oxygen bound molecules in the crust. Iron, silicon, or Aluminum (and others) are desirable in the elemental form, just strip out the oxygen from a small fraction of iron in the crust and you will have all the oxygen you need. This is almost easy in comparison -- you need lots of energy, and mining (in some form) but we already do this on a daily basis -- just not nearly enough to measure the result.

One problem that all approaches face is that compared to us puny humans, there is a lot of atmosphere. We have been pumping gigatonnes of CO2 into the atmosphere every year for quite a while now. By doing so, we have managed to raise CO2 levels up to about 400 parts per million. I know that carbon is captured by plants, oceans, etc. but estimates are around 2000 gigatonnes since 1750, of these 44% are still in the atmosphere, so about 880 gigatonnes were added to the atmosphere raise CO to current levels.

Adding 5% oxygen is inherently a much more difficult task (you can't just set carbon on fire) and a much greater larger mass change required to satisfy the requirements. I.e., change of about 125 ppm for CO2 vs. about 10000 ppm for O2, i.e., 80 times as much.

Note that none of these processes are natural, nor can any natural process do what is asked for. Significantly changing the oxygen mass requires engineering of some form. Natural processes do not supercharge the oxygen levels, or they would already have done so -- free oxygen is not the natural state of a planet, there will always be more iron, silicon, etc. to use all of the free oxygen in an earth-like planet. You have to add free oxygen after the crust and its chemical composition have stabilized. Life is generally considered the only way that this happens in real life.

A bioengineering project went very wrong. The objective was to create a lifeform that produced high purity silicon crystals. While silicon itself is incredibly abundant it's a very energy-intensive process to refine it to the purity needed by the semiconductor industry. (Note that this is a big part of the cost of solar cells and many cost improvements in solar cells are figuring out how to make them with less silicon. Thus there is a major market demand.)

The researchers didn't use proper safety measures (say, by making the creature dependent upon a nutrient that it can neither synthesize nor find--thus it can only live in the lab where it's fed that nutrient) and it got loose--and found the outside world to it's liking. It's so alien that little wants to eat it and it just sits there happily eating rock. Most rock is some form of silicon oxide, it purifies the silicon and releases the oxygen.

Now the world is in a panic as the fire danger goes up and up and up.

How best to increase atmospheric levels of oxygen? Two practical options. Cynanobacteria blooms release large amounts of oxygen. These naturally occur when organic matter is releases in ocean water. For example when a whale shits, there is a huge algae bloom in the proceeding mixture of feces and ocean water. So that being said, constitute a mixture of natural occurring waste or fertilizers and fill oil tankers with said mixture. Perhaps the proper waste or fertilizer material could be generated over produce by municipal water treatment centers. These oil tankers could then go to the gaint garabage swirl, and seed this plastic matrix with fertilizer and cynabacteria. Genetically modify cynanobacteria to metabolically process petrol chemical plastics to release carbon-hydrogen chains into a food source when combined with water to release oxygen. Kill two birds with one stone by sending resources to reseed atmosphere with oxygen, while breaking down and removing environmental polution to help restore the environment.

I suspect that you meant to say “increase the proportion of free oxygen in the atmosphere” from 21% oxygen to 22% or more. If so then this would be possible by additional photosynthesis as already described. There should also be a non organic source of carbon dioxide such as volcanism to provide the raw material for photosynthesis, large amounts of photosynthesising plants and few or no oxygen consuming animals. All easily oxidized materials such as iron, should either be absent or already be in an oxidized form as they would absorb oxygen.

If oxygen levels were significantly higher than today the fire risk would be extreme so it would be best to have a very wet environment to prevent combustion from lightning strikes. A dry forest in a high oxygen atmosphere could cause a massive conflagration on a continental scale which would convert oxygen to carbon dioxide and reduce the amount of photosynthesising plant matter. http://www.boconline.co.uk/en/health-and-safety/gas-safety/gas-risks/oxygen-gas-risks/index.html See combustibility of materials

This obviously depends on whether you actually need more oxygen, or just a higher concentration of oxygen. However, if you just want something like a higher O2 content at ground level, you can simply remove all of the heavier gasses. This would cause more O2 to be accessible at ground level, albeit the smaller atmosphere could have other effects ( less protection from meteors, etc.. ).

Not the answer you're looking for? Browse other questions tagged hard-science geology oxygen .

1
How could I have massive subterannean space on my world?

22
An iron rain to starve a planet
7
World with low amount of oxygen like Everest dead zone: can people adapt?
7
What would happen if the mass of air around earth doubled?
5
Where to begin when designing functioning alternative biochemistry for alien organisms in non-earthlike conditions?
9
If all life on Earth was exterminated, how long would oxygen remain in the atmosphere?
5
Flammability in denser atmospheres: is it a serious problem?
6
Reasonable atmosphere for an Earth-like planet orbiting a K dwarf star (including abiotic oxygen)
6
How long could a planet or moon survive if it had an Earth mass black hole within it?
5
How "geologically Earth-like" can my large terrestrial planet get?